The Here and Now of Tokyo Fashion

Readers of Metropolis should be familiar with the alternative fashion school that has taken both Tokyo and international observers by storm. Originally the mastermind of WrittenAfterwards designer Yoshikazu Yamagata, now joined by long-term collaborator Mikio Sakabe, Coconogacco appropriately translates to “the school of the moment,” with the added nuance that the koko sound also represents individuality.

From its humble beginnings in East Tokyo’s Taito Designer’s Village, an incubation space for promising designers in a converted school with exceptionally cheap rent, Coconogacco has grown from being a weekend course to an institution in its own right, well-respected by the likes of Vogue and responsible for an unprecedented amount of ITS (International Talent Support) competition nominees, among other coveted accolades. 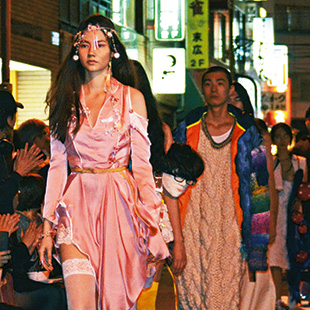 However, it’s on the domestic front that the school has begun to shine in the mainstream. Every designer of the Tokyo New Age group who stole the limelight at this season’s Mercedes-Benz Fashion Week had all done a stint at the school, making it a coveted bridge to success. As such, Coconogacco is put in line with Tokyo’s oldest and most prestigious fashion institutions. This feat is all the more remarkable considering it’s still in its relative infancy. The school’s approach is truly multidisciplinary and against the typical fashion school curriculum. Students of all backgrounds and perspectives are welcomed and encouraged, with ex-salarymen and mathematicians among the school’s past graduates.

The most recent Coconogacco exhibition, Coconoten, dragged the Tokyo fashion industry elite from their West Tokyo bubble to a derelict building in Kanda over which the students have free reign.  Some students chose to kick through walls, while others plastered every available surface with shocking pink and created creepy funeral settings in which to display their work. The goal here is to get students focused on presenting their worldview and value system over commercial garments.

In an industry bursting at the seams with disposable fast-fashion offerings, one can see why this school is very much a breath of fresh air—a breeding ground for those who not only talk big about changing fashion, but actually do. Following the exhibition, a guerrilla catwalk was staged on the street itself in front of the building, giving a snapshot of what a world created by these fashion anarchists might look like. 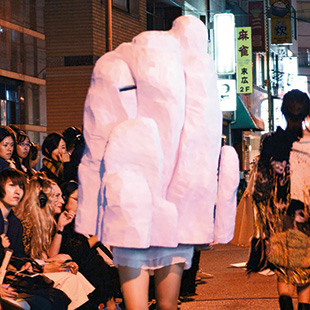 The school has its sights on an international audience, and is now providing courses taught entirely in English that are open for all to apply to. Helmed by Tokyo Fashion Week heavyweight Steven Hall of In-Process by Hall Ohara, and backed up by the talents of Jenny Fax’ Shueh Jen Fang, the new program combines the rigor required to succeed with a creative spirit that the right candidates will find irresistible.

In addition to the talent from abroad, Japanese students with an eye on the international market are also welcome. With early output that attempts to find a sense of global commonality from the likes of student Chie Yoda, who is working simply with the idea of birthday celebrations, it’s fashion that moves beyond language barriers while still communicating a remarkable sense of each student’s individuality. The approach lives up to the school’s name. With the fashion industry in Japan increasingly taking a holistic and empathetic look at the way we dress, as opposed to the luxury-focused approach that dogs Europe as well as currently developing markets in East Asia, this really is the school of the moment.

The international program from Coconogacco comes hot on the heels of a wealth of other courses from other fashion institutions that aim to open the city and its fashion to students from outside Japan. Those of a less transgressive nature should look to the likes of Esmod and Vantan’s internationally-minded programs, as well as Bunka Gakuen University’s Global Fashion Concentration—where, in the interests of total disclosure, this writer happens to teach. So, whatever your fashion persuasion, why not start the new year with a new fashion trajectory?