The clock strikes twenty-three hundred. I’m on Bar Row, a stretch of dives and karaoke joints that make up the entertainment district in the city of Fussa. Forty-five kilometers from Shinjuku, this city is home to 14,000 US military members, family members, and military contractors. They live on and around Yokota Air Base, which hosts the 374th Airlift Wing.

Fussa is not revered for being part of the quintessential Japanese cultural experience. For one thing, there are too many people with prominent tattoos. Some tourists come, but most evenings you are likely to encounter only brooders who skulk through the pink and purple neon streets after sundown. On my first evening, I spotted one bar with its doors wide open to exhibit three topless Japanese men singing heavy metal songs, their backs intricately inked from belt to hairline. A bartender tells me quite a few members of the yakuza hang out here, or he says, “maybe it’s just lots of guys missing fingers.” 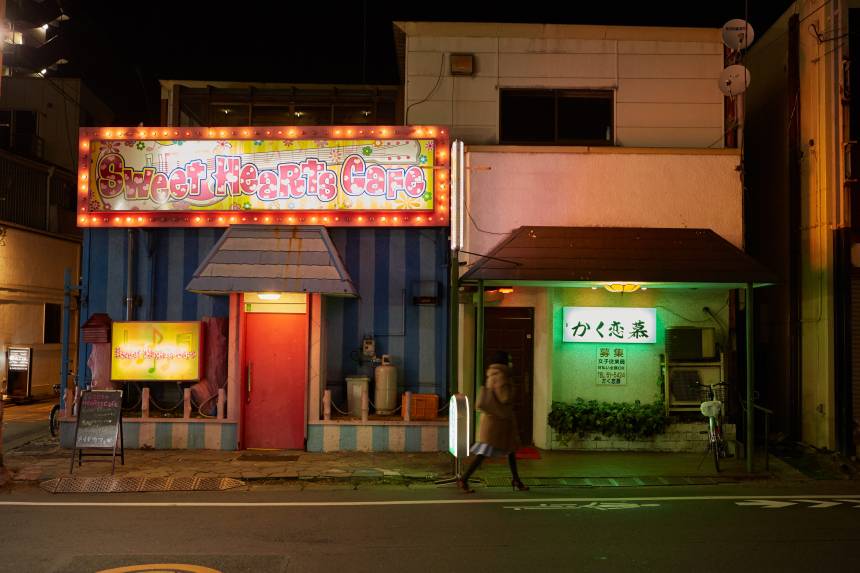 Contrary to what these images suggest, Bar Row is actually welcoming. Maybe it’s because few people here were born in Japan. They are peripheral characters and understand what it is like to go days without conversation. This was why Noah and his pal Sean demanded I join them for a beer.

Noah works in flight maintenance and hails from South Carolina. Sean is a shy Texan. The pair first met while on tour in Afghanistan. Noah was on his second round when Sean arrived to “detonate IEDs from the air.” Tonight, however, Sean’s duty is to serve as Noah’s drinking buddy—a requirement after 10 pm for any serviceperson who lives on base, since these residents have a 1 AM curfew to keep.

Because Sean lives off-base, he isn’t too fazed. He’s calm and out till late, telling me the next plan is to see a local stripper “who dances like she’s from Atlanta.” Noah, on the other hand, is a tad anxious, regularly checking his watch.

“After that, there’s a group, kinda like the FBI that does undercover checks,” a man named Chris informs me later. “Here to the base is twenty minutes. I can do it in eight if I power-walk.”

A misanthrope, Chris rarely associates with other guys. Instead he goes to Eddie’s, a rockabilly bar where the staff treat him as a friend and not a punter. “I don’t like to say all people are idiots, but you meet some on the base who are just… Neanderthals.”

He talks at length about the future of military technology: “self-sufficient drones like in Terminator” and “homing death-ray cluster bombs.” But by the time the clock hits 12:45 AM, he has vanished.

The curfew is strict. Nobody even jokes about it. By 11 PM Bar Row is already empty.

It’s been that way since 2005. The initial reasoning was to clamp down on brawls and DUIs, which were beginning to frustrate locals. “Frankly, I’m an incident away from tightening restrictions,” warned the exasperated base commander Colonel Jeff Newell in 2008, echoing every fictitious colonel in the history of Western pop culture.

In 2012, however, the curfew became permanent after two sailors in Okinawa—Christopher Browning and Skyler Dozierwalker, both twenty-three at the time—raped a Japanese woman in her twenties after a boozy night in town. This caused a storm amongst military personnel nationwide, who felt they were being unjustly punished for the heinous act. Yet in Fussa, the most vocal of all protests came from the local business owners. 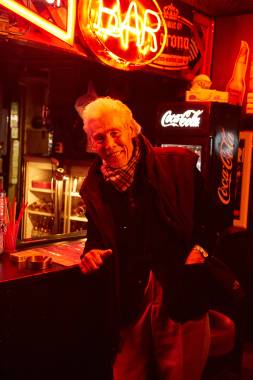 “My place was dead. It was bullshit,” said Eddie as he drove me home one night in an old white van. “That was Okinawa’s problem, but we suffered too. When the curfew came, the entire local economy went down.”

Eddie is something of a local hero. An atypical Japanese septuagenarian, he stands out with his silver teddy-boy quiff, leather jacket and two different brands of cigarette that he alternates between when smoking. He has run Eddie’s for forty-two years now, and he insists, “We’ve always loved these people. I was the first to let black guys in. Other places didn’t want them. I just said, ‘Everybody’s welcome, okay?’”

He set up shop in 1974, when Fussa was Tokyo-to’s response to Haight-Ashbury, a zone where Japanese youth co-opted aspects of the American counterculture, utilizing the vast agricultural spaces in the area to stage regular gigs. Servicemen supplied Quaaludes, marijuana and morphine, and free love became the norm.

This counterculture emerged as a by-product of the Korean War, when an influx of marshalled servicemen caused a housing shortage within the base. Approximately 1,523 simple stucco GI Houses had to be constructed between 1954 and 1960. However, as Vietnam intensified, the subsequent decline in US residents left many of the houses empty. 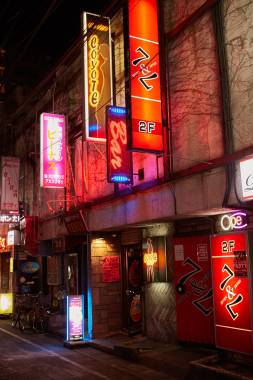 Those who invaded next were swaths of broke Japanese kids, artists, musicians and writers. They transformed the district into a series of communes, which, based on records from old council meetings, rattled more cages than the US military possibly could at the time.

Photographer Masato Sakano, who landed in 1973, said this swerve into hippiedom stemmed from issues relating to disaffected youth. He came to play music, but soon, his interest extended to the lives of the young couples, often in mixed marriages, who lived in the GI district. Sakano documented their existence in his photo-book Talking About Fussa, which explored alienation in the community.

“When I first came,” he wrote in the afterword of the book, “it appeared that the young people living in the houses were rather ignored… [Local] inhabitants tended to look down on people living on the hill.” They were seen as deviants, and locals reveled in being dismissed as perverse hedonists.

In reaction to the novel’s killer lines such as, “Ryu, put some music on, I’m sick of just fucking,” councillors heralded the apocalypse. The mayor was pressed to intervene for fear that “other young people will come to Fussa City to live in the atmosphere described in the novel,” but sadly, his predictions fell flat.

Fussa did not crumble because of those kids with their sex and drugs and rock’n’roll. The downfall came when Nixon’s floating monetary system strengthened the yen and hit local businesses hard in 1973. Over seven years, thirty percent of the shopping district had shut down and the cheaply constructed GI Houses fell to pieces. By 1979, the city was little better than a wasteland. 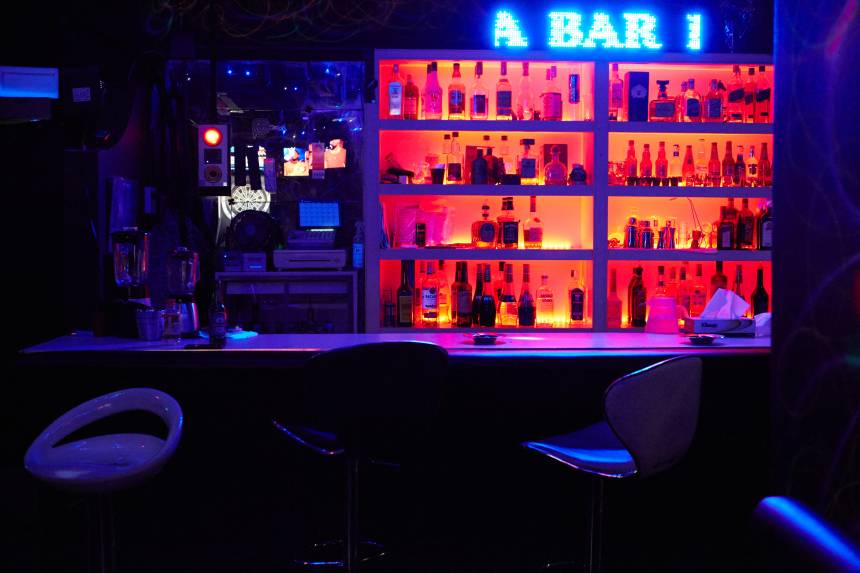 What salvaged the city was good PR. To attract tourists, Fussa rebranded itself as a base town. Japanese entrepreneurs invested in shops, which sold military chic and a myriad of ethnic Asian migrants arrived in the latter part of the decade to set up restaurants and bars. Among these was Queen Sugar-Mother, who landed in 1989.

Both she and Eddie were service industry veterans by the time that their bars made the official list of venues verboten between 1 and 6 AM in 2005. They rarely look back on this period with fondness. Neighborhood bars were losing almost eighty percent of their clientele. It was a challenge then and remains so to a certain extent today.

Still, amidst that anxiety, what keeps the city on its feet is the camaraderie of oddballs who know how to adapt while looking out for one another. The present is volatile and often determined by US foreign policy. So what can you do? Most places remain in existence because they do not let these situations affect morale. Everybody is warm, so much so that newcomers are treated like regulars almost immediately. These people take the halfway house and make it a home.

It’s why Fussa remains such a curious anomaly. At the core of the eerie interzone is a place of transient but sincere friendship.