Those who venture out into the cold for a fix of fashion retail might be surprised: Shops are currently crammed with spring fashion, and have been since early February. It’s an odd situation even the fashion industry can’t justify—especially given that Japan’s renowned for producing fashion in tune with the seasons. This is true—just not at the right time of year.

The problem has only worsened as January’s sale season has become so culturally ingrained. There are a few brands daring enough to go against it, such as cult Harajuku brand Banal Chic Bizarre, who make a point of not budging their prices by a single yen all year round.

Tokyo Fashion Week may be just around the corner, but arguably stealing its thunder by way of mainstream media coverage is Tokyo Girls Collection (TGC), which celebrates its 10-year anniversary on February 28. Certainly in terms of numbers of visitors—a predicted 30,000 this time around—TGC has the reach, not to mention it brings out celebrity models and stars.

This time, Korean pop sensation Big Bang performs, which the official Mercedes-Benz Tokyo Fashion Week is probably a shade jealous of.
Saying that, the comparison really isn’t fair—the latter is proudly aligned with the intellectual, conceptual and high-end that the Japanese fashion scene has to offer. Meanwhile, TGC is unashamedly more “real clothes”: The fashion that you’re likely to see on the streets, trains or anywhere outside the Tokyo street-fashion hunting grounds.

In the end, it’s those two forces that keep Tokyo fashion going strong. Tokyo Fashion Week ensures the extremes stay extreme and the highs
stay high, while TGC guarantees the fashion average outstrips pretty much every fashion capital. The only question is, which side are you on? 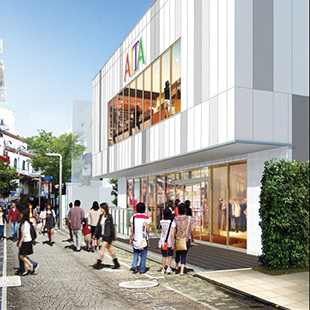 Takeshita-dōri, the perennially busy shopping street leading from Harajuku Station to the fashion-action proper, gets a new landmark in the form of Harajuku Alta. The mall joins its cousins in Niigata and Ikebukuro, not to mention the original iconic and popular meeting spot in Shinjuku.

The Takeshita addition to the Alta portfolio adds to the ranks of many high-profile openings, including kawaii culture hub Cute Cube Harajuku, as well as some famous foreign names, replacing the smaller independent stores that brought kids to the street in the first place. Whether this is a great loss, gentrification or rejuvenation depends on your perspective and fashion persuasion. But with 19 youth-focused shops, including a Disney Store and Kawaii Cafe (better known as “the Sad Cafe”—really), those still in their teens or with kids of their own are probably going to be drawn in sooner or later. 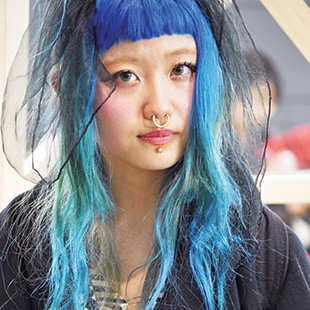 Against the grain
(Photo by Samuel Thomas)

For all the “craziness” orbiting Japanese fashion, people often forget what a big statement dyeing your hair or popping in some piercings can be.

In the latter’s case, even a subtle piercing can be a career-halting move in that it alters the body—counter to traditional Shinto beliefs.

The hair issue is even stricter, with a single shade off natural black disqualifying applicants from many jobs. To those brave enough to go against the grain, we salute you.