The other side of Inokashira

Described by Tokyo’s official travel guide as “an oasis in the city,” Inokashira Park has helped make Kichijoji one of the city’s trendiest neighbourhoods. Picturesque all year round–especially during sakura season–the park boasts plenty of attractions that make it a popular destination for a diverse mixture of locals and tourists. There’s a zoo, a handful of lively restaurants and coffee shops, a mix of sports fields, an outdoor theater, a shrine, a pond, and the recently renovated Ghibli Museum. Whether you’re planning a first date, a place to sip some afternoon konbini drinks, or just scouting for the perfect spot to take your next selfie, Inokashira Park is a pretty safe bet.

Well, safe to an extent. While after-dark might be one of the most romantic times to visit the park, it’s also when things get straight-up creepy. As late-summer temperatures start their slow descent and fog begins to swirl through the park, the line between “unforgettable evening stroll” and “the ‘Upside-Down’ from Stranger Things” starts to get a little blurry. 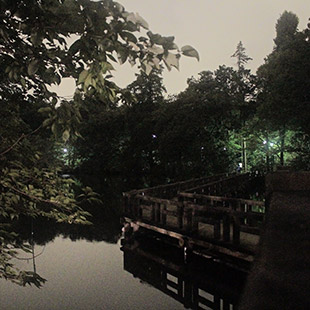 Despite being smaller than other major parks in Tokyo, it’s still easy to lose the crowd. Walk through the park late at night, and it won’t take you long to find yourself completely on your own. Alone and in the dark, the whole tone of the park changes. Quaint dirt paths that were inviting when doused in sunlight seem like significantly worse ideas after dark, even with the park’s ample lamp light.

The same holds true for the architecture. One of the park’s most charming features is its coffee shops, like hidden gem Blue Sky Coffee. As they are housed not in slick modern structures but old wooden houses that could be mistaken for enchanted cottages, it’s hard to imagine a more peaceful place to enjoy a warm drink—during the day, that is. Flip the switch to midnight, and it’s like a scene from ’70s Japanese horror film House. Storm shutters down and pitch black, save for a single light in an upstairs window…they look like the kind of place where the price of a latte isn’t a few hundred yen, but rather your mortal soul. Still want that cup of joe?

It’s not just the time of day that lends the park its darkness. Some believe that Benzaiten, the goddess to whom the Inokashira’s blood-red Shinto shrine is dedicated, has placed a curse on the space. According to an urban legend, any couple who rides in one of Inokashira Pond’s rowboats—yes, even those adorable vessels shaped like swans—will inspire such jealousy from Benzaiten that they’ll be doomed to break up shortly after they’re back on shore.

But there’s more. Even if you don’t believe in ghosts, it’s interesting to note that the area was also the site of an infamous unsolved dismemberment case that went on to inspire Natsuo Kirino’s 2004 crime thriller Out.

But even at its eeriest, Inokashira Park is stunningly beautiful. Its dark side might even serve to make it more attractive. Far more than merely picturesque, it’s the kind of place that has plenty of secrets to discover, and can completely transform itself depending on which story you choose to believe.

Tokyo is one of the safest cities in the world, and so there’s likely no real danger in this little wooded paradise just south of Kichijoji Station. But who can really say what’s hidden in the shadows?