Speaking the universal language of punk

Japan is a place where—to the Western mind—appearances can be deceptive. A woman could be a man; a donut could be a bean-paste bun; a “yes” could mean “no.”

“The Japanese punk scene is a bit strange in the sense that even without punk’s energy, bands are considered punk here,” observes frontman Tagu of Tokyo punk outfit Punik ahead of a trip to Taiwan. “It may look like punk, but it’s not really—in fact, you could say that about Japanese rock as a whole.”

Formed in 2008, Punik are one of the hardier acts on Tokyo’s live house circuit, logging a punishing 100 gigs a year at storied Chuo Line rock venues like Earthdom and Mission’s. They’ve been approached by major labels but prefer to reject commercial pressures and, Tagu says, “retain punk’s original impulse.” Their performances are a jangled-nerve storm of tracks with titles like “Punk Bomb.” 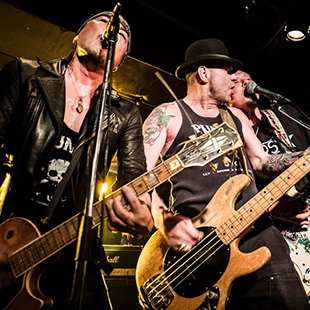 Debuting as a trio with Fuckareyoudoing??, Punik (a pun on “punk” and “panic”) recently added Englishman Nigel van der Grijspaarde on bass. “The first time I saw Punik, these three guys ran on stage, plugged in, and basically assaulted their instruments and the audience’s senses,” he recalls. “It was a raw blast of power, incredibly loud, there were bum notes and not one of them gave a damn! It was the most refreshing thing I’d heard in years.

“Soon after that, their bassist quit,” he continues, “and a mutual friend set up a meeting. Tagu and Makoto were already well in their cups. There basically was nothing to joining except they both made one thing clear—passion! We rehearsed on Tuesday and my first gig was Friday. That was it. Tagu said, ‘Don’t worry about screw-ups, just put your guts into it. We’re gonna play 11 songs in the next 25 minutes. Ready?’”

How does the band maintain its brutal schedule while holding day jobs? “Punk rock has been my motivator since I was 13,” Grijspaarde answers. “It hooked me when I was going through a turbulent teen time and never let go. To us, it’s not spiky hair and spit; it’s the way we live. We use anger constructively, and when you’re standing on stage waiting for that ‘one, two, three, four’ above the feedback … well, there is nothing else like it. Though it has to be said that for the first few gigs with Punik, I would come offstage and puke from the exertion!” 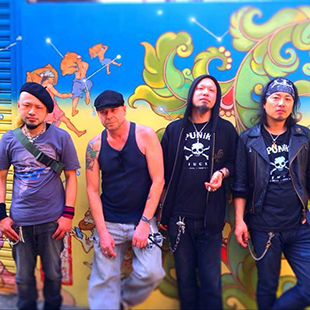 A veteran of the U.K. punk scene, Grijspaarde says the band is getting positive feedback from his old mates in England. Punik have also brought their roots punk to Las Vegas, where they performed at the first-ever Hempfest, sharing the stage with members of Cypress Hill, Fishbone Project, and Beijing. At the time of this writing, they were in Taipei for the Anarchy in Taiwan street punk festival.

Grijspaarde calls Beijing and Taipei “hotbeds of unrest, anger—especially amongst the students … ideal for punk expression,” but like Tagu, expresses mixed feelings about Japan’s punk scene. “Japan is a relatively easy country to live in—no cop beat-downs, comfortable level of living—people living the superstar life vicariously through insipid ‘talents,’” he says. “Yet on the other hand, some of the world’s most extreme music can be found right here, played ferociously night after night in hundreds of dingy, sweaty pisshole joints.”

As for life as Punik’s lone gaijin, it seems that forty years since its invention, punk has become a universal language, easing Grijspaarde’s path.

“There’s nothing special about having a foreigner in the band, but Nigel doesn’t speak Japanese, so we have to communicate through gestures,” Tagu laughs. “But when it comes to the music, as soon as we start to play everything’s OK.”