Rebekah Wilson-Lye: For the Love of Sake

Reimagining nihonshu in a modern age

When Rebekah Wilson-Lye — a composed New Zealander with blunt bangs and translucent, green eyes — talks about sake, passion underpins her every word. The Tokyo-based sake expert and International Wine Challenge (IWC)  judge is one of three central figures in Kampai! Sake Sisters, a documentary about women in the sake industry. She’s also a chief organizer of Craft Sake Week, which takes place April 19-29 in Roppongi Hills.

The self-labeled “sake maniac” took some time out of her busy schedule to talk with Metropolis about Japan’s quintessential drink, its fall and revival on the global stage and why women are at the forefront of the new wave. 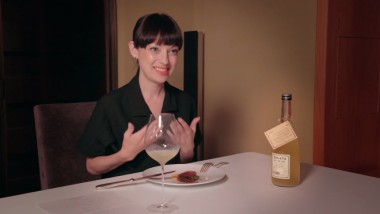 Having grown up on the lush coast of New Zealand, Wilson-Lye had always enjoyed wine. Her love affair with sake, an alcoholic beverage made with fermented rice, began much later in life. She had just moved to Izu-Nitta — a “tumble in the countryside” of Shizuoka Prefecture — to teach English after living in Seoul for two years. At the staff welcoming party, a coworker handed Wilson-Lye a glass of world-renowned Isojiman.

“That sake changed my life,” Wilson-Lye says. “It had this amazing aroma of melon and banana and apple. When I tried it, it had the most beautiful crystalline expression and delicate sweetness and complexity, and a beautiful finish.” Instantly intrigued, she asked her peers what it was. “They told me, ‘It’s nihonshu,’” she recalls. “I didn’t know any Japanese in those days, so it took me a while to work out that they meant sake.”

It’s no surprise that Wilson-Lye recalls her first sip of “real sake” like it happened yesterday, with all the precision of a seasoned sommelier. For over a decade, she has dedicated her life to cultivating a “golden age of sake” in a country whose population has increasingly lost interest in the national drink. During peak times in the 1920s, there were almost 10,000 breweries in Japan, compared to the 1,300 or so operating today.

“Especially after World War II, with industrialization and the development of a middle class, the aspirational model was Western,” Wilson-Lye explains. “People wanted to go to Disneyland. They wanted to drink Western beverages, eat Western food. With this turn to the West, and declining generation that was stoic about drinking sake, the industry saw the decline but did not look for new markets. I think there was sort of this complacency like, ‘There’s always been a market for sake, so we’ll be okay. We’ve always been okay.’” 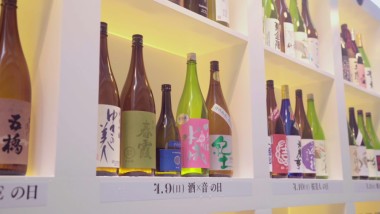 Then came Wilson-Lye, an unlikely heroine of an age-old industry traditionally run by Japanese men. Largely self-taught, she entered the world of sake “through the back door” by attending tasting events and conversing with her favorite brewers before becoming an expert in the trade. She’s now a certified educator, and judge in the IWC sake competition. Rather than stick to convention, Wilson-Lye engages players from various disciplines to create new possibilities for sake in the 21st century.

She played a major role in developing the Takashi Murakami x NEXT5 sake brand, a collaboration between the contemporary artist and a group of progressive brewers from Akita Prefecture. She also handpicked the sake list at Murakami’s eclectic Bar Zingaro in Nakano Broadway. Currently the head of international marketing and PR at Japan Craft Sake Company, she works alongside Hidetoshi Nakata — a soccer star turned sake ambassador — to spread the word about sake’s potential at home and abroad.

A big part of their mission is quality control. On trips overseas, Wilson-Lye was shocked to find that imported sake is often damaged due to a lack of temperature control during the distribution process. “Importers will often ship sake in the same container as miso, soy sauce and other foodstuffs, so, either due to a lack of knowledge or budget constraints, sake is being shipped at temperatures which will ultimately corrupt its original quality and flavor,” she says. “I started to discover that there’s this massive blackhole.”

To help bridge the gap, Nakata and Wilson-Lye are establishing an international system for -5 degrees export. Other developments are in the works: In 2015, Japan Craft Sake Company launched a multilingual app called Sakenomy, which lets people scan bottles and search for information about different brands. In addition to designing a range of sake-specific glassware, the company has teamed up with Sakura Works to create a “sake cellar” that will allow restaurants, hotels and home connoisseurs to keep sake and wine at their optimum temperatures.

“We shouldn’t be fearful of innovating the crafts that are connected to sake as well,” Wilson-Lye says. “We must be very respectful of tradition. We must be thoughtful to the legacy, but I think we also need to create movement.” 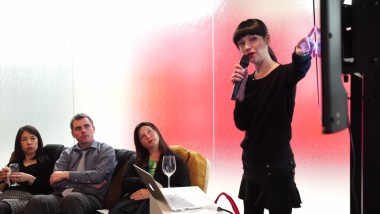 For Wilson-Lye, sake is not just a drink, it’s an entire culture. A conversation with her doesn’t consist of spouting technicalities of how sake is made or what the best brands are. While facts are important, stories are what truly capture a person’s heart. The community that surrounds each sip — a region’s terrain and climate, people and their legacy — drives the narrative of sake, and these are the stories that she continues to tell.

“I think that the reason that women are leading the charge in this golden age, this returning age of sake, is because women are naturally communicators and community builders,” Wilson-Lye says. “What sake needs is, it needs a new, diverse generation to return to the community. We don’t just need customers, we need brewery staff. We need people who know about marketing and branding. We need a whole lot of people to come back into this new era of sake.”

Kampai! Sake Sisters premieres April 21 at Yebisu Garden Cinema in Shibuya. Tickets are ¥1,800 and can be purchased online. Craft Sake Week runs April 19-29 and hosts an extensive program of music, art and tasting events in the Roppongi Hills area. A timeline is available on the event website.