Sometimes an interest becomes an obsession, and then a life calling. When Australian anthropologist Fiona Graham first came to Japan, she was a 15-year-old exchange student. But in time, she became Sayuki—a working geisha. Metropolis spoke with Sayuki about the trials and rewards of being Japan’s ‘first Western geisha.’

Tell us about the first time you dreamed of being a geisha.

After I got my doctorate in Social Anthropology from Oxford, I started making programs for broadcasters like the BBC. I proposed a program about geisha; the project took on a life of its own from there, and I debuted as Sayuki—which means “transparent happiness”—in 2007.  As with any geisha over the age of 21 or so, I debuted directly as a geisha. It turned out that it was impossible to make a program as the newest geisha in Asakusa. I couldn’t ask questions freely of my older sisters, or ask them to participate in filming in the way that I would have needed to do as a director. So I had to put the program on hold and concentrate on becoming a geisha.

What was the hardest part of your training?

I went through a very strict, very old-fashioned training, where I went very heavily into debt for a whole year before I could debut. There was a lot of financial pressure on me and a lot of uncertainty about whether I would really be allowed to debut, which made my training very stressful. One of the biggest challenges facing the geisha world is how to finance the training of new geisha in the months before they can formally debut and work, during which time they have to pay for lessons but do not yet get paid.

What were the pluses and minuses of the book and film Memoirs of a Geisha?

Memoirs of a Geisha was based on very extensive interviews with a real geisha, so I think a lot of the details and color came from that real-life experience. It’s a pity that many people don’t register that it was a novel, not a nonfiction account, and that it was set in the pre-war period, not now.

What are the most common misconceptions about geisha?

So many misconceptions! The first misconception is that geisha are involved in sex work. Courtesans were involved in sex work, and geisha were not supposed to compete with the courtesans, even in old times. In modern times, if one wanted to be a prostitute, there would be many easier ways to do so than becoming a geisha! Many Western women have stereotyped views that geisha “pander” to men and are submissive. Geisha have always been working women, largely in control of their lives, even in earlier times.

What kind of people do your performances attract?

My smallest banquets are one customer, and my largest has been a thousand customers; the youngest customer one year old, and the oldest in their nineties. Anyone can come to a banquet, and there are many other uses for geisha than just banquets. Geisha are often at the openings of new shops or businesses, we have entertained at trade fairs, we have performed at Narita Airport for the openings of new routes, and we can visit expats’ homes to do private birthday parties. We love to travel overseas too.

What kind of expectations do foreign customers bring to your performances?

Many don’t know what to expect, or expect a very formal occasion. Geisha love to drink, and love to have fun, and most of our banquets are very lively occasions. It’s very easy to book a banquet or to call geisha to your own venue, just by contacting www.sayuki.net. We only need to know your numbers and your maximum budget per person, and can make all the arrangements for you.

You were denied the chance to be “geisha mother” because you are not Japanese.

I left Asakusa after four years to establish my own independent geisha house because my geisha mother became ill and retired, and I was not allowed to become a geisha mother on the grounds of being a foreigner. I had initially planned to train as a geisha for a year, but at the end of the first year, I had only just debuted. And so I asked and received permission from the Geisha Association to continue as a geisha from that point on, under the same obligations and rules as any other geisha. So it was a shock when they did not apply their own rules about me becoming a geisha mother.

Will the geisha tradition be able to continue without opening up to foreigners like sumo?

Any foreigner can arrive at a sumo stable and learn Japanese while they train. But the geisha job is a talking job. Geisha must be witty, wise, humorous, understanding, and provide perfect service in the context of Japanese society. It is simply not possible to do that without near-perfect Japanese. It is also illegal for a foreigner without long-term residency to work as a geisha, and if they attempted to do so, they would be putting their geisha house at risk. 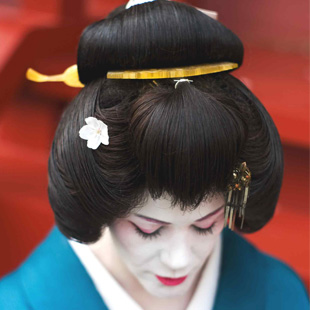 Since I debuted, several [geisha] foreigners married Japanese. Thus, with long-term residency, [they] have worked as geisha in the countryside, where it is acceptable to be married. But that would be impossible in a town district. Apart from a Peruvian in Yugawara, these foreigners have now all quit. Many foreigners are attracted to kimono and dance, but being a geisha is a great deal more than just dressing up and performing.

At least one geisha house in Tokyo has succumbed to economic pressure and started running a companion business—kimono-dressed hostesses, something normally utterly unthinkable for geisha to do. I was told they have been ostracized by other geisha houses who did not want to share a geisha office in the same geisha district as a house doing this. One can imagine that such a geisha house in dire straits might try to recruit novelty foreigners with little or no Japanese skills as a publicity stunt, so it is a good thing that Japanese law protects against this cheapening of the geisha world.

Geisha work mainly in their own geisha districts, and fees are set in each geisha district so that geisha are protected from having price wars with each other and with other districts, thus destroying their own livelihoods. One can imagine a situation where a rogue geisha who didn’t understand these traditions and was solely focused on profit might enter, but this would be a catastrophe for the geisha world.

Tell us how Japan’s tourism boom is affecting geisha.

For a period, at least some Japanese customers were not so interested in geisha in white makeup, and numbers of geisha correspondingly declined. But there is a revival going on now, and younger Japanese customers are quite similar to foreigners in their lack of knowledge of, and curiosity about, geisha; and see geisha as representatives of tradition as much as drinking companions. Tourists are actually wonderful customers for geisha, because they want to see the genuine article and appreciate the art of geisha.

Being a geisha must be very expensive. Tell us about some of the costs entailed.

A geisha in a high-class district can be wearing $10,000 of kimono when she meets her customers, so there are very significant expenses in our attire. There are also heavy expenses for lesson fees. Geisha in Asakusa only learn from the top masters in each school and must pay lesson fees continually, whether they attend or not. My father was diagnosed with terminal cancer a few months after I became a geisha, and I had to frequently travel back to Australia to relieve my mother in looking after him. When I came back to Japan each time, I would face a mountain of accumulated fees for lessons I had not been able to attend. Eventually, [I] had to give up dance and tea ceremony lessons at the geisha office, and concentrate on music instead, which I could practice alone wherever I was.

One of the challenges in the geisha world is how to raise new geisha. I have had eight trainees in the last years who have gotten to the stage of attending banquets. I would like to see companies helping sponsor young geisha, in the same way that sumo wrestlers are supported. I am very open to offers to help my next young trainee start her career!

What do your mom and dad think of your career?

I grew up partly in Japan with a Japanese family and attending Japanese schools, so my real family has long had to accept that I chose a life that was not quite average!