Searching for the Perfect Snack

In a country where food is almost unavoidable in any situation, a snack bar has an ironic lack of snacks. This is because they are in fact not bars specializing in small bite-sized portions of food between main meals, but rather establishments specializing (generally speaking) in the entertainment of middle-aged men by young female hostesses.

There are an estimated 107,000 snack bars across Japan, according to the NTT phonebook, which provides some indication of their popularity. They are generally clustered around train stations, but can be found throughout neighborhoods, regardless of size, location or affluency. In 1964, when laws changed preventing adult entertainment establishments from staying open after midnight, snack bars appeared as a way around the rules, offering light snacks that put them in a different regulatory class. Snack bars quickly became a common nijikai (kick-on party) destination for salarymen, and their popularity peaked in the 1980s, which is why many still sport Showa-Era decor. 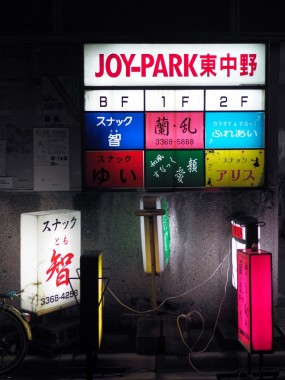 While there are no clear definitions of a snack bar, there are a few core features. A snack bar differs from actual hostess bars in that the woman are generally not expected to do dohan (dinners with customers before heading to the bar together), and they have a lower price point — although not cheap. Encho (payment plans ) vary, but as a ballpark, hourly rates may start at around ¥5,000 per hour plus drinks. The two most popular drinks, whiskey and shochu, may be around ¥12,000 and ¥7,000 per bottle, respectively. And then there is the requirement to buy the hostesses drinks. So, all in all, hundreds to thousands of dollars a pop.

Inside a typical sunakkku, there’s a bar counter with some stools, and tables off to the side. There’s a made-up woman in her 40s or 50s behind the bar, often wearing kimono. She’s known as “mama-san,” and runs the joint.

Behind the bar, there are rows of bottles emblazoned with names or with name tags draped around the neck. Whiskey and shochu are the drinks of choice. Generally, drinks are not bought by the glass but by the bottles as snacks are a place to get drunk, and having a personal bottle on a shelf is a way to attract repeat business and to make customers feel at home. The only snacks served are crackers and nuts, and sometimes simple homemade dishes.

Generally, men between the ages of 40 and 60 sit at the bar. They’re salarymen, either alone or in groups, visiting after work and clocking up some expenses on the company account. They may be doctors or dentists or school teachers or CEOs, or even politicians.

Flitting between the men, or sitting suggestively close, are the hostesses. Their role is to keep the mood light, welcoming and jovial, and to look after their clients — light their cigarettes, pour their drinks, sing karaoke and chat with them, entertain and fawn over them. Invariably, there is a TV for karaoke in a corner of the room. Drinking and singing have been part of socializing in Japanese culture since Edo-Era parties, and karaoke is integral to snack bars. Looking back to geisha culture and the courtesans before that, this model of entertainment appears centuries old in Japan. 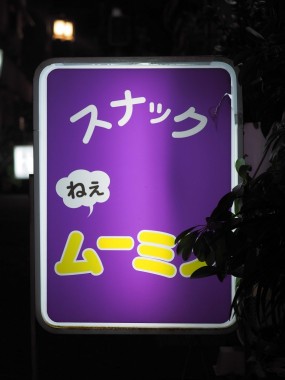 And while snacks are not in the business of selling sex, customers are drawn to the illusion of sex, however fantastical it may be. Contact numbers may be exchanged, but this is usually to lure customers back in. The women dote on their clients, and try to get them to spend as much as possible and to visit as often as possible.

The young women who work as hostesses may do so to supplement their income from day jobs, or they may be students saving up to go overseas, or women taking up the opportunity to earn a decent income in a country where the gender pay gap remains high —  according to Nikkei, in an article from February, women get paid an average of 73 percent less than men.

How to spot a snack bar? Generally from the telltale wafts of perfume, smoke, stale booze, and waves of karaoke emanating from any crevasse as you walk past, and from the word “スナック” on the sign.