In September, my wife and I set aside three days in Shiga Prefecture for a adventure into rural, traditional Japan through with tour guides company Sato Home & Tour.

On our arrival, not wanting to waste precious time, our hosts drove us first to Hikone Castle, one Japan’s most important cultural sites. Listed as a national treasure, it was completed in 1622 and, unlike most Japanese castles, is still intact. The seat of the Ii daimyo (feudal lord) until 1868, it houses a permanent exhibition of the Ii clan’s family treasures such as arms, armour, kimono, musical instruments and documents.

A sumptuous kaiseki (multi-course) lunch was arranged for us at Takeheiro, a restaurant located on the historical Nakasendo route that runs from Nagoya to Tokyo. This delightful traditional restaurant is surrounded by a Japanese garden where moss-covered rocks, black pines, maple trees and the babble of running water create an ambiance of peace and tranquility. Takeheiro is famous for a historic visit by the Meiji emperor in the nineteenth century; the room where he rested is now a shrine. 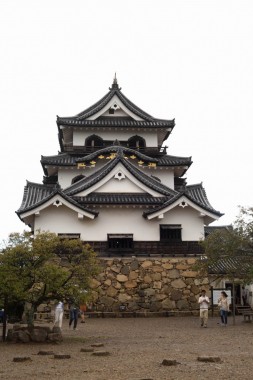 Our guides then introduced us to a meal fit for an emperor. Beginning with miso soup, there followed a variety of dishes that included delicately prepared sashimi, kobana-maki (rolled omelette), prawn tempura, yakitori (skewered chicken), buri teriyaki (yellowtail teriyaki), pickled vegetables and numerous other dishes.

Following the meal we visited a family-owned brewery, Fujii Honke, where saké has been made since 1831. Every year during the harvest festival the sacred drink is delivered to the Imperial Court in Tokyo. The brewery is owned by Tetsuya Fuji who, like his father and grandfather, makes sake from watari bune, a rice that originated in Shiga. Yamada nishiki rice, known as the king of saké rice was developed from it. Having absorbed the finer points of saké-making, we inspected the original cellars where the liquor is stored in large vats. Under Fuji’s guidance we sampled several vintages noting their subtly different flavours.

Late in the afternoon we drove to Lake Biwa. Known for its sweet and delicate fish, it is the largest freshwater lake in Japan. In awe we watched the setting sun spread a myriad of sparkling points of light upon the surface of the lake. After a long day we were happy to arrive at our accommodations, suitable for the most fastidious tourist.

In the evening we were guests at a barbeque where yakitori, slices of wagyu beef, a multiplicity of salads, pickles, beer and saké were served. Sitting outside with our new friends, beneath a star-lit sky, it was a perfect finish to our first day exploring ‘old Japan.’ 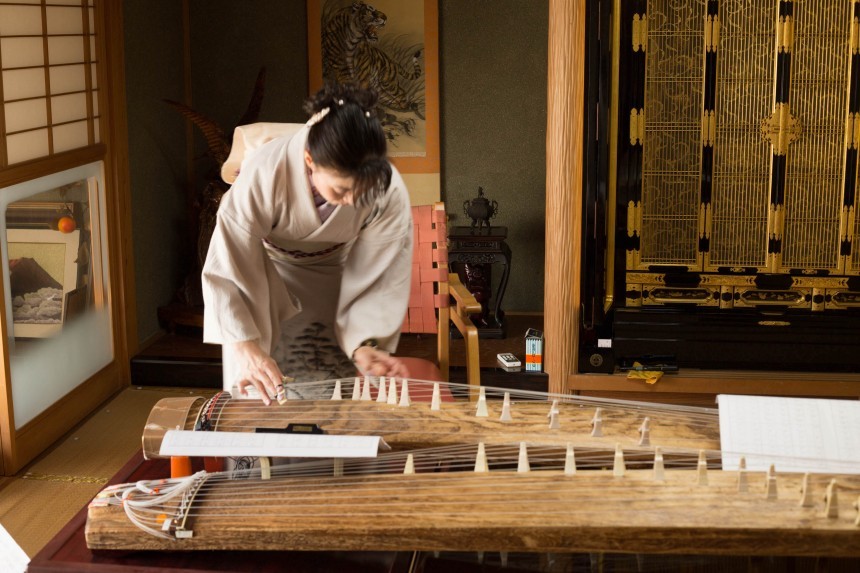 For lunch we ate at an izakaya (informal gastro-pub) where we had a soup made from ingredients of our own choice. Together with a glass of beer, it was a satisfying snack. Then we travelled to Omihachiman, a picturesque town from which prosperous merchants once transported goods on a tree-lined canal. Many of their houses still exist. Once a town serving Hachimanyama-jo (castle), which is now a ruin, Omihachiman is still a bustling place.

At a nearby studio we were instructed in shodo, a distinctively Japanese style of calligraphy that dates to the fourth century. Learning to make fude (brushes) from reeds, and then trying the art of writing Japanese characters, was an instructive pleasure. To write like a Zen master—effortlessly, without thinking—might take a lifetime of practice.

Even our guides from Sato Home & Tour could not have engineered what happened next. Beside a canal a feature film was being made with a cast of dozens. We were enchanted as one of Japan’s leading actresses, Shinogu Terashima, and her male partner, Hiroshi Abe, gave us a preview. 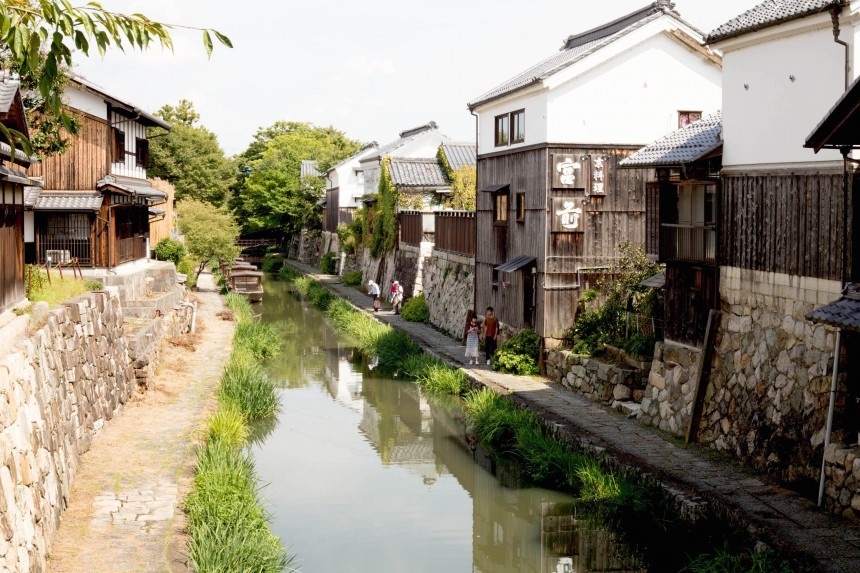 At dusk we took the seven-minute ferry ride to Okishima, the only inhabited island on Lake Biwa. Three hundred residents and many more cats make up its population. Tomoko Hosogaki (the owner of the house where we were staying) had arranged for us to dine at Mizuunosei, one of three restaurants on the island. Again we were treated to a series of delectable courses. Over a period of two hours we were introduced to a myriad of dishes that have become a gastronomic kaleidoscope in my memory. Sansai (vegetable broth), sashimi, usuyaki tamago (thin omelette), nerimo (fish cakes), gyudon (beef and rice) are just a few I can recall. Walking back to catch the last ferry to the mainland, we looked up at a bright half moon floating in a velvet sky. Fishing boats rocked at their moorings and gentle waves lapped the breakwater.

On our last day we went to Mt. Hiei Temple, a drive of about an hour and half. Founded in 788, it was the first Japanese temple of the Buddhist Tendai sect. To become a monk requires a thousand days of prayer and walking meditation around Mt Hiei; its purpose is to transform the mind so that it will empathise with others and project thoughts of peace throughout the world. After a strenuous walk up ancient stone steps enclosed in a tunnel of over-arching trees, we reached Hieizan Enryaku-ji, a world heritage structure known as the mother of Japanese Buddhism. After removing our shoes, we entered the incense-perfumed temple where calm and peace descended upon us and monks sat lost in deep meditation. Outside, at the enormous Peace Bell, we were encouraged to strike it loudly so that its reverberations might carry a message of peace to all people. 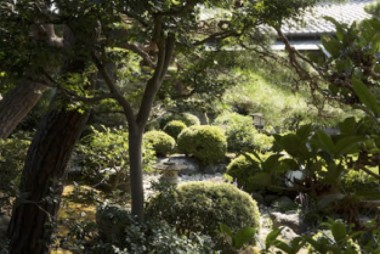 Lunch at a vegetarian restaurant in the temple complex introduced us to food that had been prepared in imaginative ways that would appeal to everyone’s tastes. Salads of kinpira gobo (braised carrot and burdock root), carrot and daikon namasu (raw carrot and white radish in a sweet vinegar dressing), cucumber sunomono (cucumber in a light vinaigrette dressing) were served, accompanied by miso soup, pickles and crunchy, crystal clear kaisomen (noodles made from seaweed) .

Before reaching home that afternoon, one more experience of ‘old Japan’ remained—to see tatami mats being produced. Yamagenseijou is a small factory that makes them on a specially-designed machine. Although still finished by hand, gone are the days when they were the product of manual labour. However, the factory owner demonstrated the finishing process by hand and presented us with small samples of tatami to take home.

For our last evening, neighbours had been invited to our house to meet us over dinner. A dozen of us sat in a circle in the living room, where a vast amount of exquisite Japanese food was set out on a low table. The evening was an example of unbounded Japanese hospitality. Only a few guests spoke English but that didn’t matter. Patience and goodwill allowed us to communicate with smiles, hand gestures and an occasional Japanese word.  We had become friends. The meal was more than a gourmet experience; it was a perfect way of bringing strangers together in a setting of ease and companionship. That night we retired replete with food and a better knowledge of Japanese art and culture.

In the morning, Akiko and Toko returned us to Maibara Station where our adventure had begun. As the train left the station we said farewell, our sadness assuaged by thoughts of certain return.