Shusenjo – The Main Battleground of the Comfort Women Issue

One of the most painful and lingering controversies of Japanese imperialist and WWII history is the issue of so-called comfort women, or women forced into sexual slavery. Despite the Japanese government’s apology in 1993, the Abe administration has been insisting that the wartime government did nothing wrong and that the brothels they set up were staffed by willing participants. This is counter to much historical evidence that suggests women from around Asia were conscripted against their will. The governments of Korea and China in particular have been active in erecting memorials for the affected women and demanding compensation.

Otherwise apolitical, Japanese-American director Miki Dezaki was drawn into the heated political fray when he posted a video on racism in contemporary Japan. This led the right wing in the country to attempt to bury him with threats and online attacks, so he committed himself to researching the comfort women topic — this documentary being the fruitful result. Showing how the issue affected women from nations including Korea, China, Taiwan, Malaysia, Myanmar, the Philippines, Indonesia and Micronesia, the breadth and detail of this work surpasses other documentaries based on similar topics. One such work is the Japanese-produced Riben Guizi (Japanese Devils), which exclusively features interviews of ex-Japanese imperial army soldiers on exactly what they did while occupying China, in all its graphic minutiae. 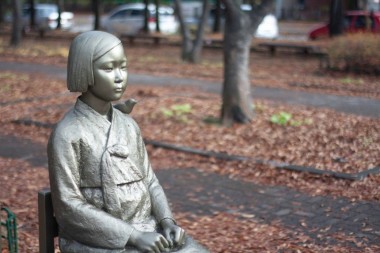 “Statue of Peace” by Kim Seo-kyung and Kim Eun-sung in front of the Embassy of Japan in Seoul.

For Shusenjo, Dezaki takes on crucial issues such as how the women were actually recruited, what kind of eyewitness accounts exist and what kind of government documents remain. He interviews dozens of people to hear both sides of the story and digs for the historical truth, hidden beneath 60 years’ worth of propaganda and anger. He exposes the fact that each side has hedged toward a narrative that doesn’t capture how complicated and messy the situation really is. The issue is even more pertinent in the light of Japanese media accepting the government version of events, as well as changing terminology around the matter. Dezaki has created crucial viewing for those concerned with the political realities of Japan’s past, present and future.

Screening at Image Forum in Shibuya from April 20.

Every Friday evening showing will have English subtitles.