On a Sunday afternoon in room 103 of a Nerima-ku apartment, smiling ladies donning pink aprons distribute bags of fresh cabbage, smoked salmon and tonkatsu (pork cutlets). This is the Nerima Kodomo Shokudo Pantry, a pop-up food pantry supporting those hard hit by the COVID-19 pandemic. It’s a new addition to Yoshie Kaneko’s long-running Nerima Kodomo Shokudo, a nonprofit organization providing free, nutritious meals to children and their families, many led by single mothers. Among those who visited the pantry that afternoon was a mother-daughter duo who, before collecting their food, sat down with Kaneko to seek advice on how to complete remote schoolwork without owning a tablet or laptop. 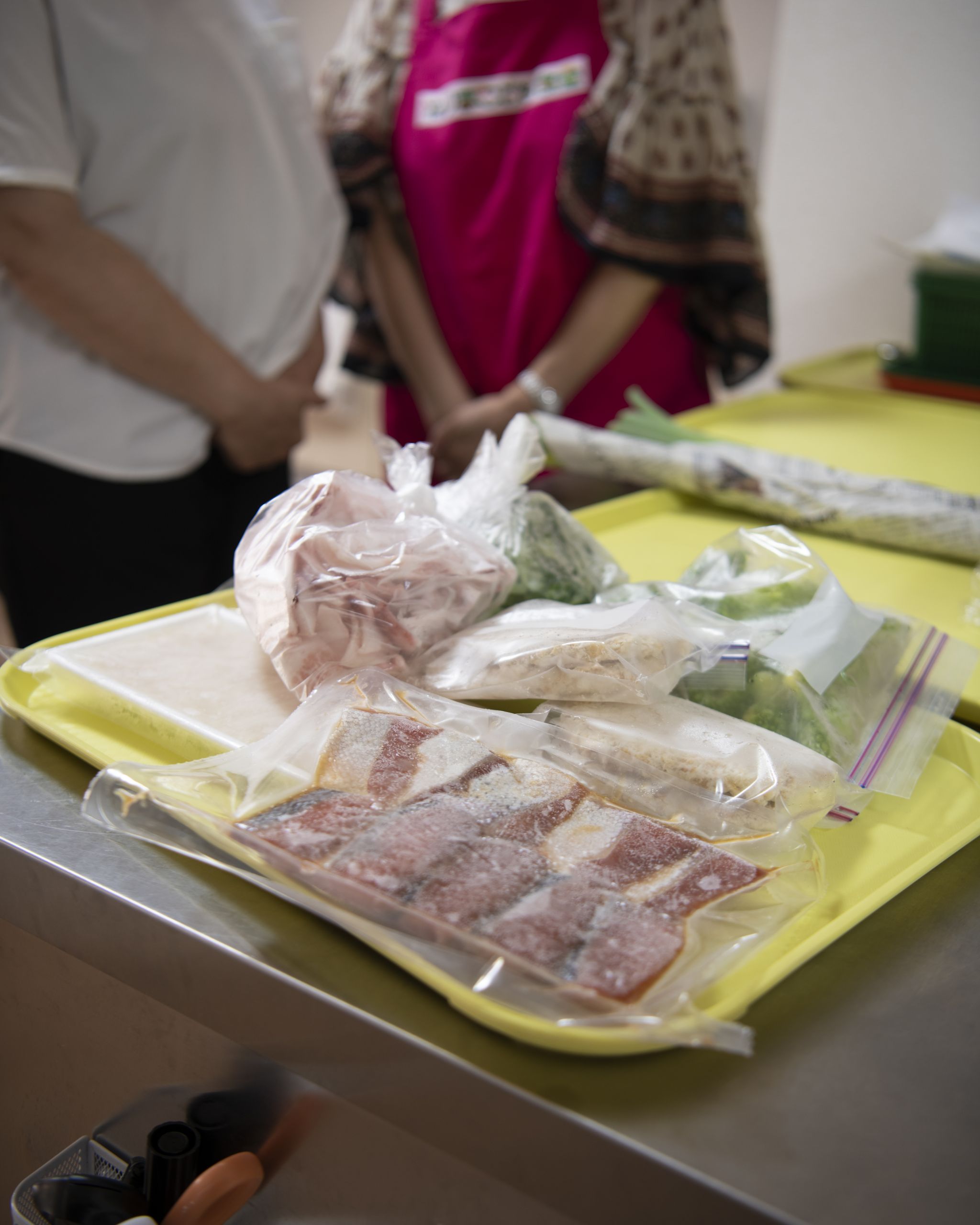 Food is donated to the pantry by neighborhood farms, firms and private individuals.

Although it may come as a shock to some, according to the Organization for Economic Cooperation and Development (OECD), around half of Japan’s single-parent families, most of which are led by single mothers, live in relative poverty. This ranks among the worst in the world’s advanced economies. Arisa Tanaka, a mother living in Tokyo working for an international company, currently faces the struggle of single parenthood with two young children. While technically a married woman on paper, she and her husband live separately. “We separated when my children were still young and, since he’s from Africa, I decided to continue the marriage on paper, so he could continue living here easily and see his kids. At first, he’d come to see his children at least once a month, but over the years his visits became more infrequent. He doesn’t give me much financial support either, so I’m the sole provider for our kids. However, because I’m not a single mother on paper, I don’t qualify for any of the welfare programs here.” 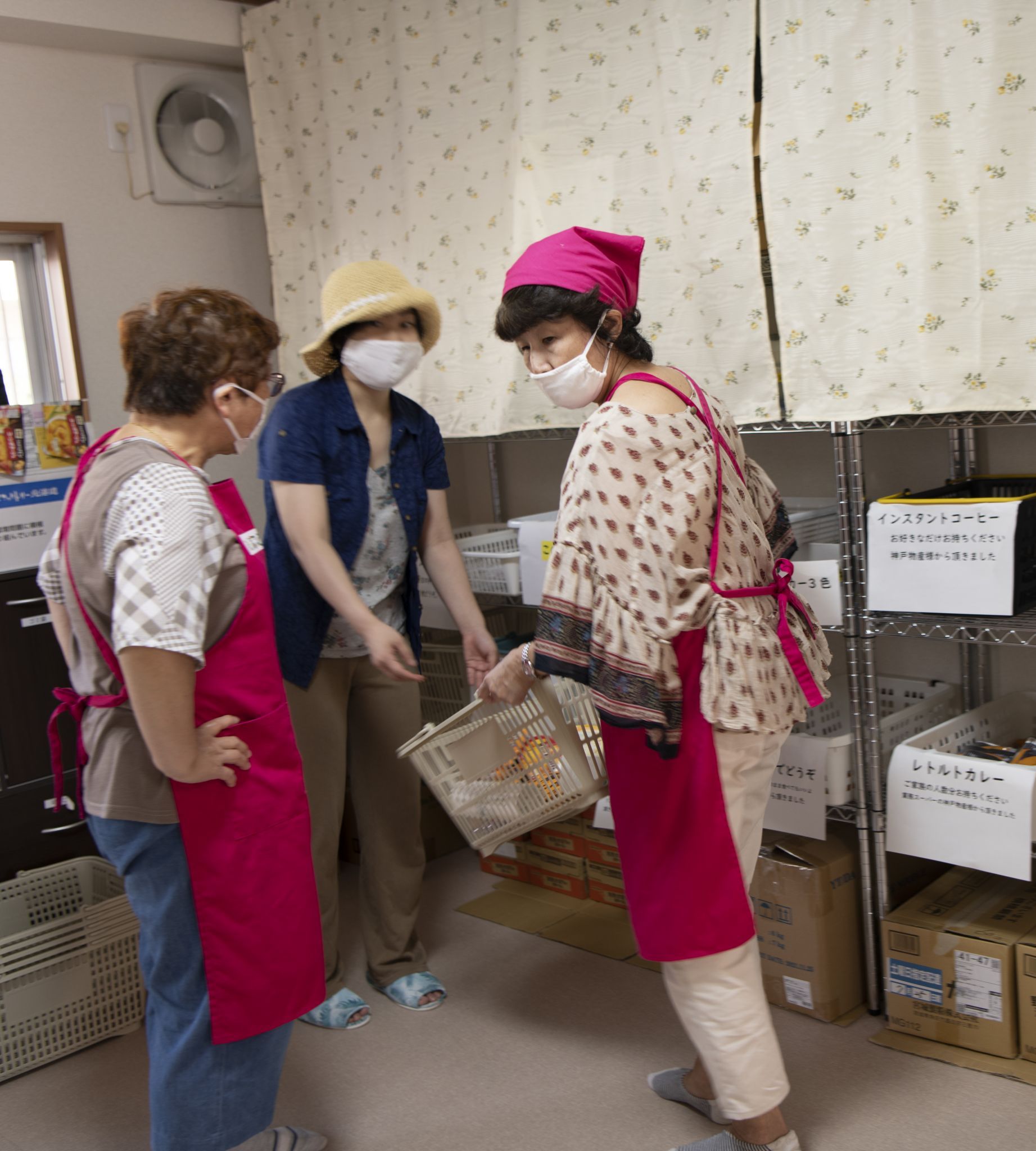 The volunteers have a great understanding of what people coming to Kodomo Shokudo need.

The concept of the nuclear, single-income family is alive and well in Japan as raising a family usually requires one parent to stay home. The government even punishes double-income households with higher taxes despite the money going to the better welfare of the children. Tanaka continues, “It’s stressful because I’m the one that has to file all the paperwork for their school and taxes. The money he [Tanaka’s husband] makes usually doesn’t affect our household. However, there was one year when he made more than previous years, so our taxes were raised and I had to pay for the difference out of my own pocket.”

Tanaka has been one of the lucky few who were able to find accommodating employment, as she works entirely from home. Michiko Osawa and Jeff Kingston remark about the challenges mothers face in the book “Japan: The Precarious Future” when returning to work.  Compared to America, where 73 percent of mothers can find steady employment upon returning to work, only about 22 percent of mothers were able to do so in Japan. For many Japanese companies, single mothers are considered risky hires since they are seen as unreliable due to their double role as a provider.

I wish they [the government] could be more understanding
—Toniko Martinez (Left), Mother of Two 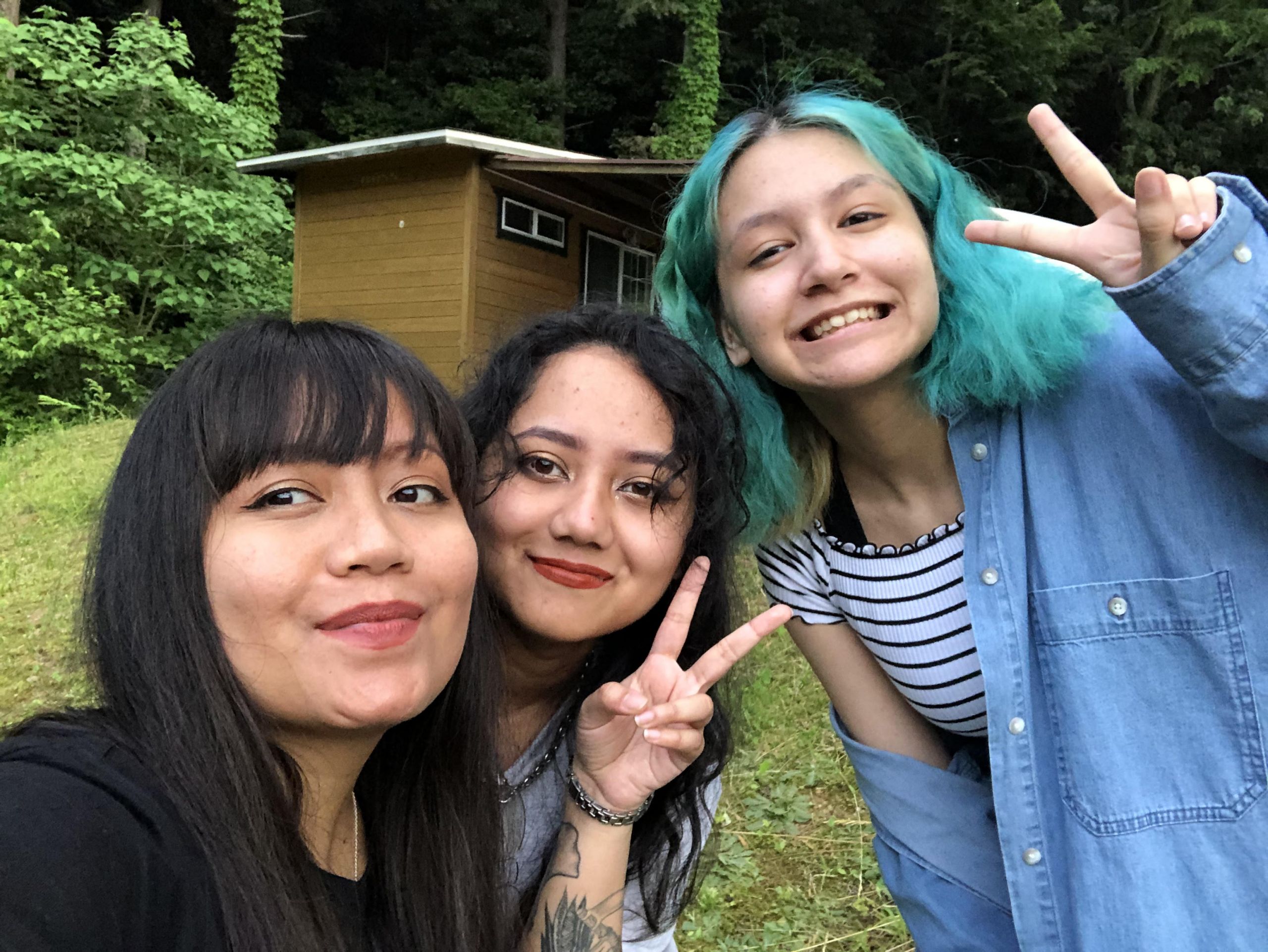 The work of Kodomo Shokudo supports families like the Martinez’ who have been affected by the pandemic.

Toniko Martinez works full time to provide for her two daughters and her 80-year-old mother, a dialysis patient who goes to treatment three times a week. She comments that her “number one struggle” is having to juggle her time between work and household responsibilities. She has been fired from some jobs for taking absences for family emergencies.

Martinez has also encountered hurdles when applying for government benefits. She was denied rent support because she couldn’t provide the divorce papers necessary. On paper, she is still married, but the last time she heard from her husband was around 20 years ago. She has not been able to reach him. “I wish they [the government] could be more understanding,” she says.

Kunihisa Koyama, director of Little Ones, a non-profit organization committed to supporting single parent families since 2011, explains Japan’s stringent protocol for receiving social benefits. To apply, one must go to a government office and fill out extensive paperwork, but information on the procedure and eligibility of support is difficult to find. It’s especially challenging for single mothers who have limited information literacy, or who simply cannot afford to put aside time for research. To help such parents, Little Ones provides an online platform, Kokomina, that compiles information on job opportunities, housing options and available social benefits. 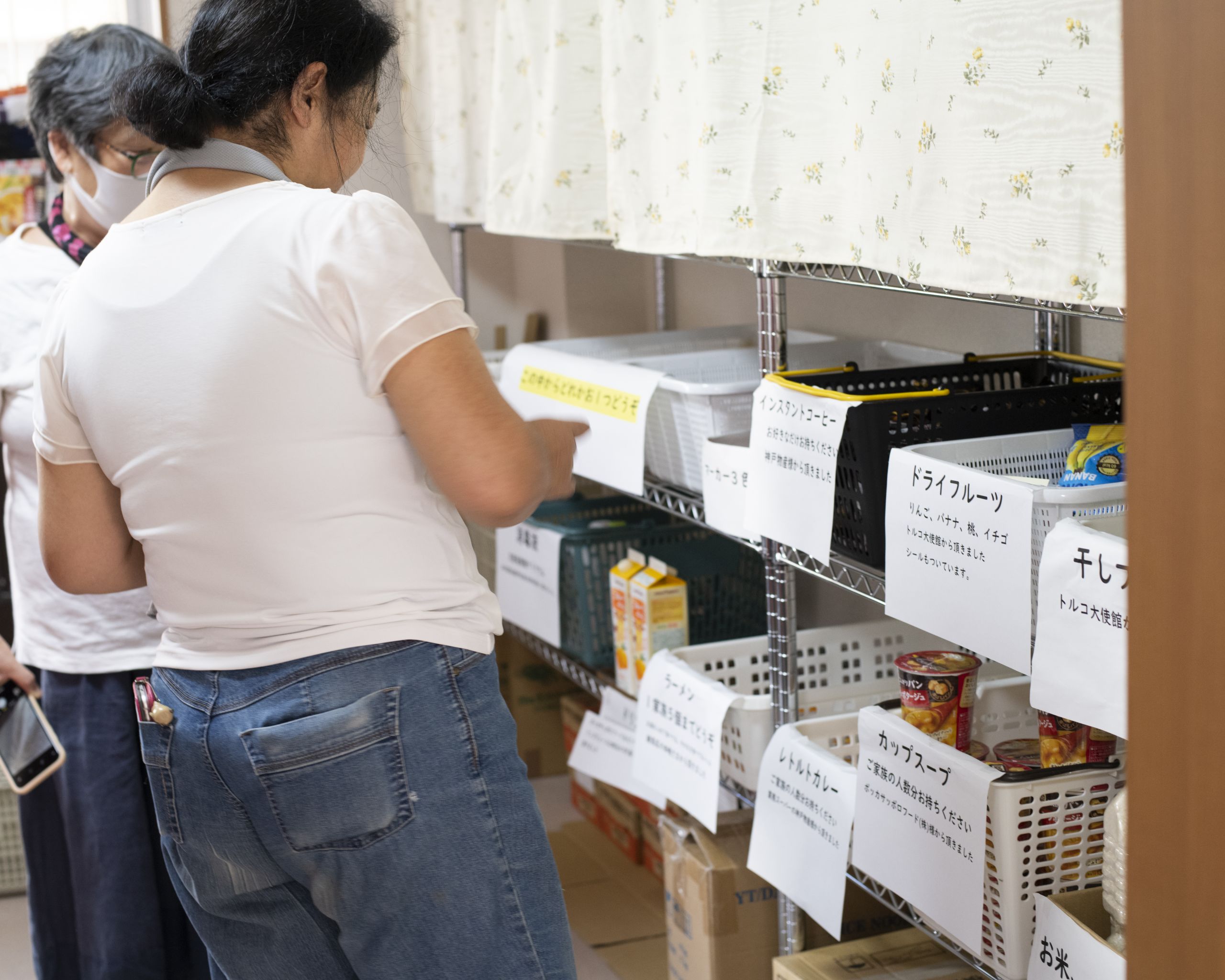 The baskets of food donations contain a variety of basic everyday groceries.

It’s a difficult subject to bring up because no one wants to talk about it.
—Arisa Tanaka,  Mother of Two

The COVID-19 pandemic has exacerbated the challenges single mother households already faced. Compared to the time before the pandemic, Little Ones is now receiving around three times more consultations from single parents. Martinez’s eldest daughter is now out of a job due to the pandemic, so Martinez is once again the sole income provider, working an eight-hour job while sustaining an art business on the side.

Read more on the gender pay gap in Japan.

Data from Japan’s Welfare Ministry in 2016 shows that there were 1.4 million single parent households and over 90 percent of those homes were led by mothers. Although divorce rates are increasing, the stigma of “single motherhood” still carries a heavy weight in Japanese society. Tanaka expresses, “It’s a difficult subject to bring up because no one wants to talk about it. It makes it almost impossible to find resources and support because a lot of single mothers are too ashamed to seek help.” 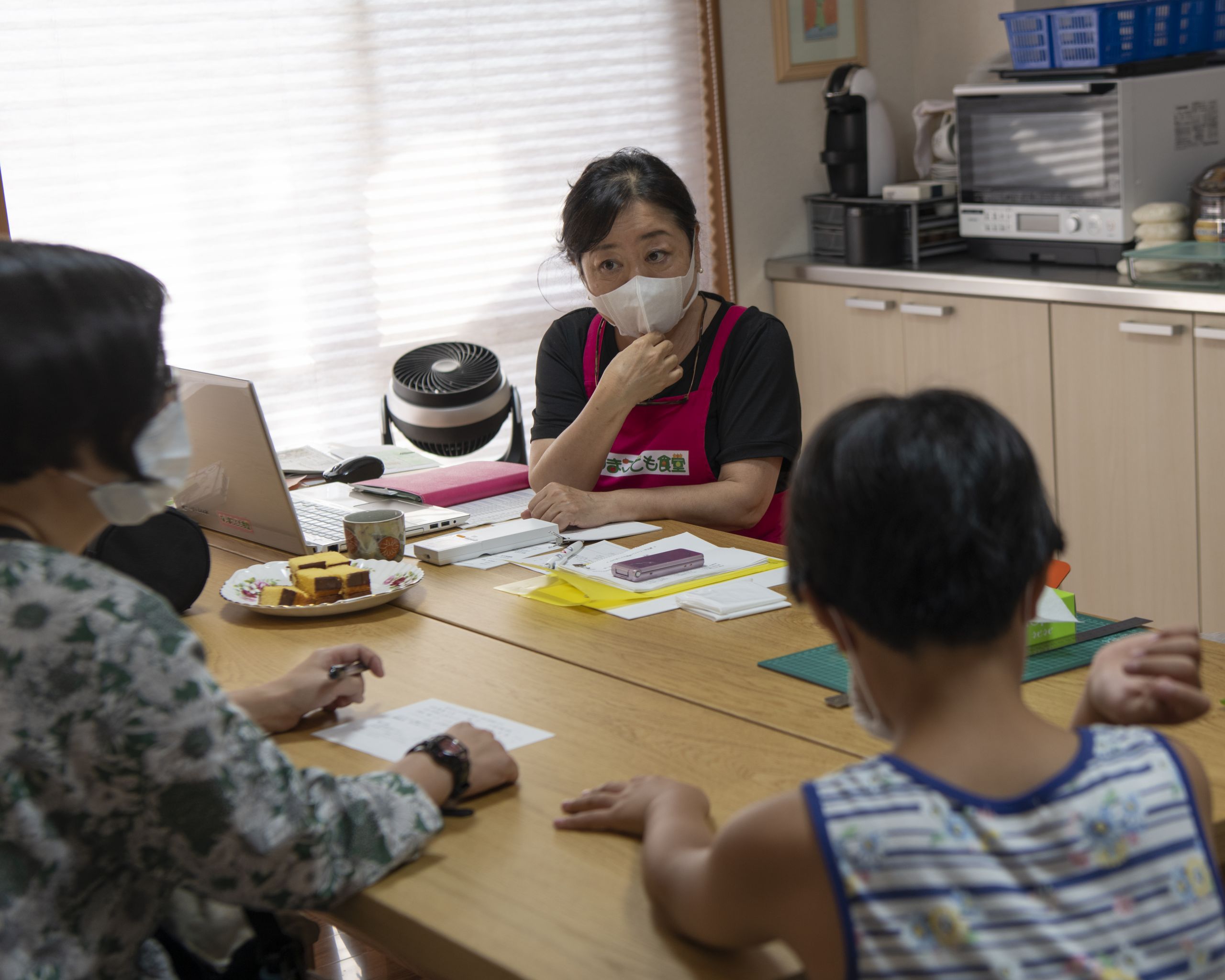 A mother and her child consult with Kaneko about difficulties with remote schoolwork.

Koyama comments that the Japanese media’s portrayal of single mothers is problematic. In many cases, single-mother families are presented as objects of pity. Because of this, Koyama explains, he himself has been painted by the media as a “hero” for creating Little Ones. Many are surprised that he, a man, would voluntarily support single mothers. “I’m not a hero,” Koyama states, explaining that this view is unproductive as it perpetuates the popular image of single-mother families as helpless people in need of rescuing. Perhaps, the sooner more people interpret the struggle of Japan’s single mothers as it is, and not the distorted version of it, the more progress can be made.

As the birthrate of Japan continues to decline since 2010, the Japanese government has implemented “Family Friendly” policies to raise the fertility rate to 1.8. These policies instigated supported marriage at a younger age, free childcare for all households, improvement of work-life balance, as well as providing financial support for local matchmaking events.

However, the policies seem to hover more around promoting pregnancy instead of alleviating the societal pressures preventing vulnerable families from thriving.

Tanaka adds, “Japan likes to label everything, so much so that even the people who need help can’t qualify for certain services. Everyone blames the mother first when something goes wrong. So, it’s not just single mothers who need help, all mothers need help.”

Resources for single parents in Japan

Getting the COVID-19 Vaccine in Japan