A Two-Night Sojourn Through Tokyo

It was a Friday in late November as I trudged through the horizontal rain, following my guide Keiko through the backstreets of Asakusa. We were heading toward kaiseki (traditional Japanese multi-course meal) restaurant Ichimatsu, in the neighborhood’s fabled geisha district. The restaurant is housed in a traditional Japanese structure, fronted by stone walls and a neatly manicured garden of little stone bridges, carp-filled ponds and well-coiffed shrubbery. In spite of the pellet-like raindrops, I was immediately smitten by the surroundings — as I always am by such charming accoutrements of landscape architecture. 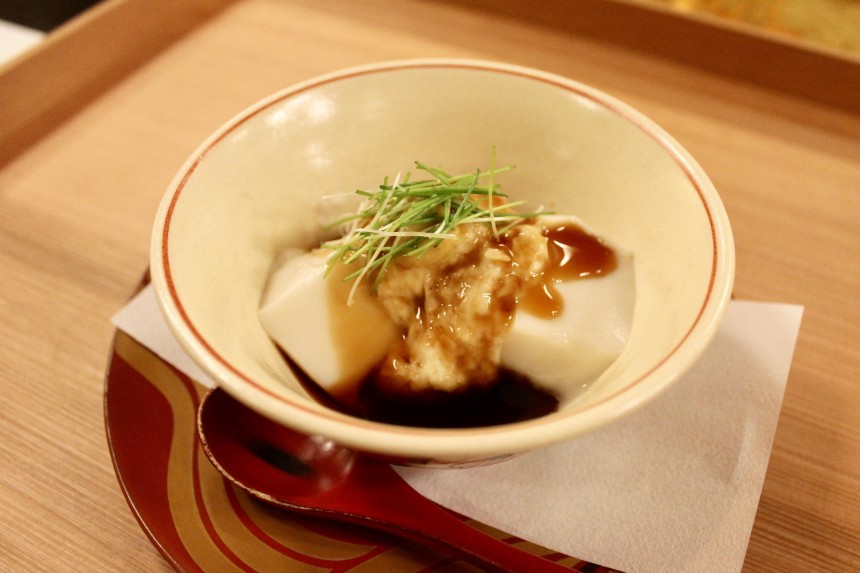 Inside, Ichimatsu offered much of what its theatrical entrance promised: fusuma sliding doors, tatami dining rooms and waitresses clad in kimono and decorative obi fussing over my every movement. The nine-course kaiseki meal was a symphony of autumnal foods; each delicate dish seamlessly flowing into the next. Persimmons, assorted sake nibbles, seasonal steamed fish and sesame tofu all featured on the omakase (chef’s choice) menu. The pick of the bunch however was the grilled grouper served with pickled yam, young ginger and edible chrysanthemum. Such startling creativity serves as a reminder of why kaiseki is Japan’s undisputed gastronomic emperor. 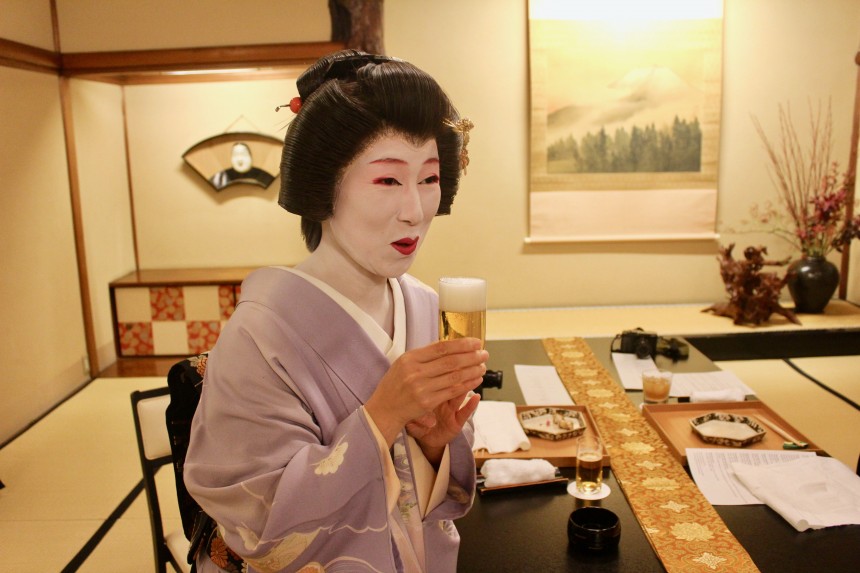 Our dinner was enlivened further by the evening’s entertainment — a dancing geisha wafting a washi-paper fan along with an old shamisen (Japanese lute) mistress deftly plucking the strings. This provided the backdrop to our mid-meal palate-cleanser of nihonshu (rice wine), of which there was a verifiable plenitude. We played old tea-house party games, involving deft hand movements of which I was not particularly adept, leading me to drink more nihonshu than I had bargained for at this early juncture. By the time we left, in pursuit of our next destination, Hoppi Dori, I was feeling rather merry and in that state of reflection which often takes over the lone drunken mind. I’ve certainly had worse starts to a weekend. 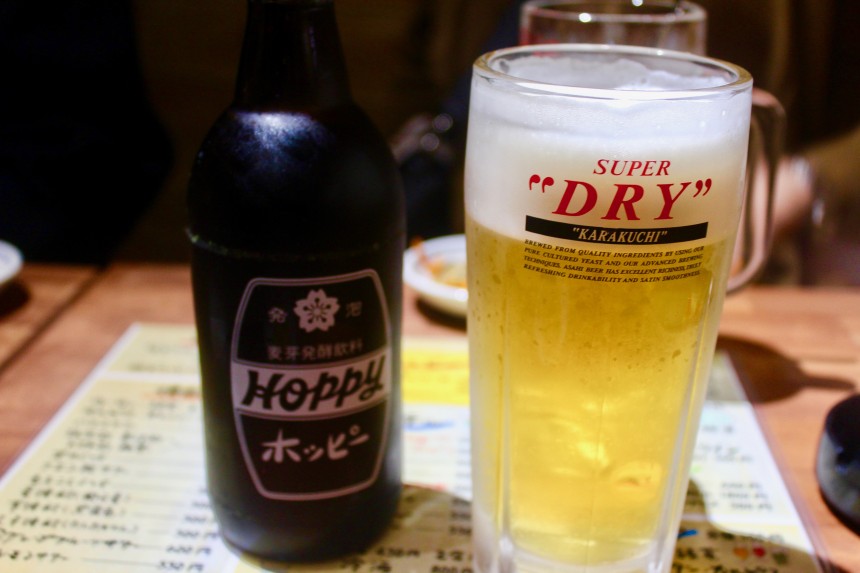 Tokyo looks ethereal in the rain, especially at night. This was so as we made our way toward Hoppi Dori, a street of izakaya (gatsropubs) lying just beyond Senso-ji’s temple grounds. The traditional storefronts, slick streets and kanji-covered signs illuminated against the city’s darkness is a photographer’s dream. Being a writer alas, I was pleased when we retired indoors to Okamoto, a convivial establishment on the corner. We sat upstairs with fresh drafts in our hands looking through the wood-mullioned windows at the quiet street below. Along Hoppi Dori, watery light dribbled through translucent, rain-proof canopies protecting the nightly revellers beneath. Scarcely a soul walked the streets, bar the odd foolhardy imbiber arcing his umbrella forward in an en garde pose against a full-frontal precipitous assault. I was just glad to be warm and dry. 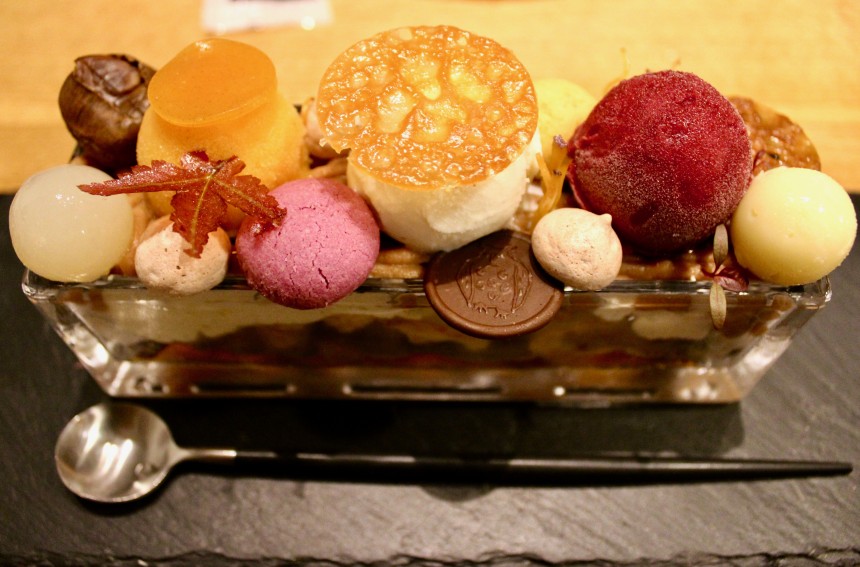 Thoroughly ‘topped up’ we headed to the other side of the city, to bring our evening to a close at Parfaiteria, Shibuya. This urbane gelateria is located in a nondescript building on the third floor next to raucous girls bar — or so it seemed from the jolly, briefcase wielding salarymen giggling their way out the door. I’m not a confectionery guy, but I’ll concede that the ice cream parfaits were exquisitely presented: huge, colorful structures of sugar, dairy and ice, each with more ingredients than a weekly shopping list. Clearly Parfaiteria is a hit, if the queue snaking its way down the stairwell was any indication. 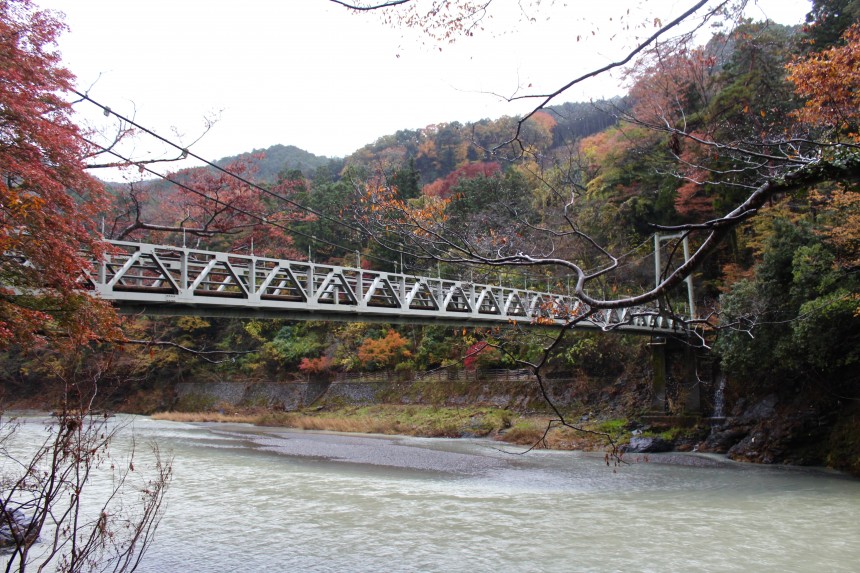 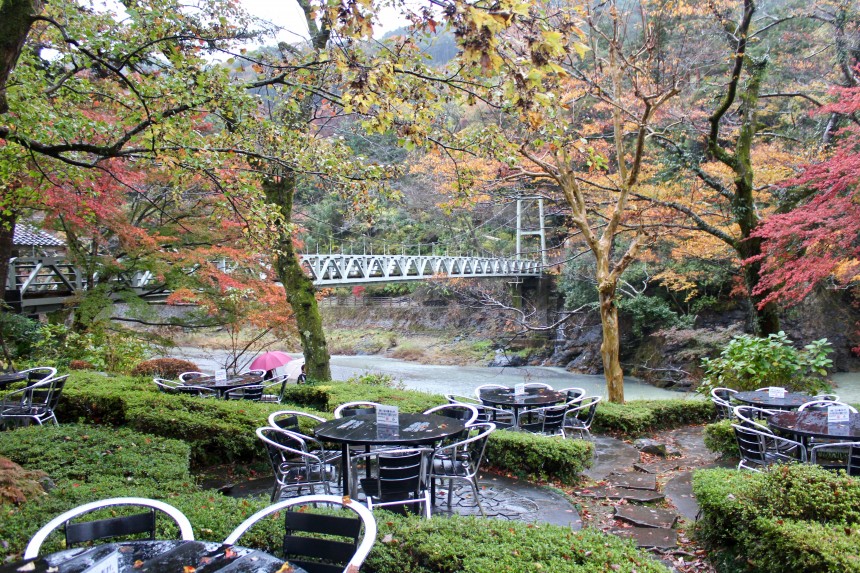 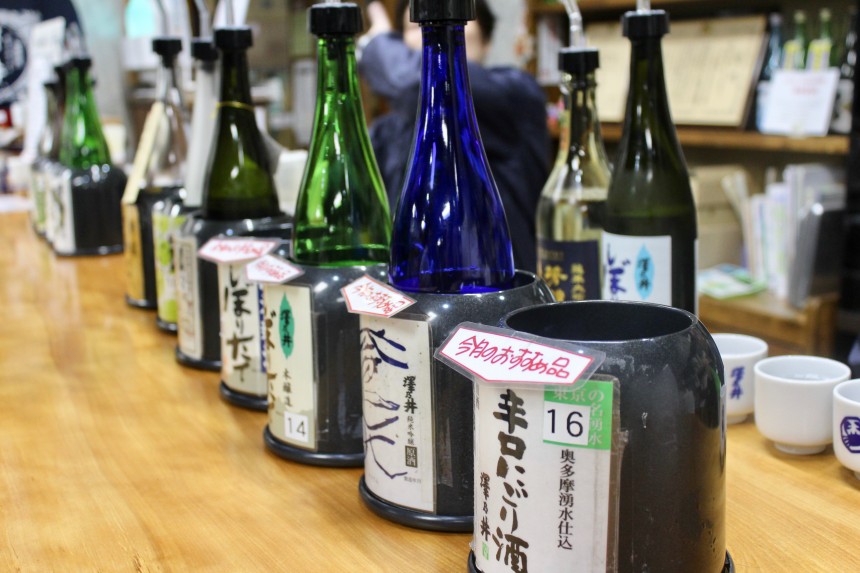 On Saturday morning, I tried my best to work off the excess parfait before making the journey west to Sawai Station. I arrived there just before sunset and was immediately struck by a thought: It’s autumn. Now this might seem a little trivial, but in Tokyo, it’s hard to tell. As Tokyoites, we are not overburdened with trees; I don’t commute along zelkova-banked esplanades, and my balcony certainly doesn’t overlook any leafy boulevards. No, we live in the world of Tadao Ando and other self-made monarchs of concrete; the color-shifting fall foliage can sometimes pass you by. At Sawai however, there was a blaze of autumnal hues tumbling over the surrounding hillsides. Rusty reds, fiery oranges and khaki yellows enveloped the treetops. After meeting up with Keiko once more and meandering downhill to the Sawanoi Brewery, I got the feeling that I was going to like this place. 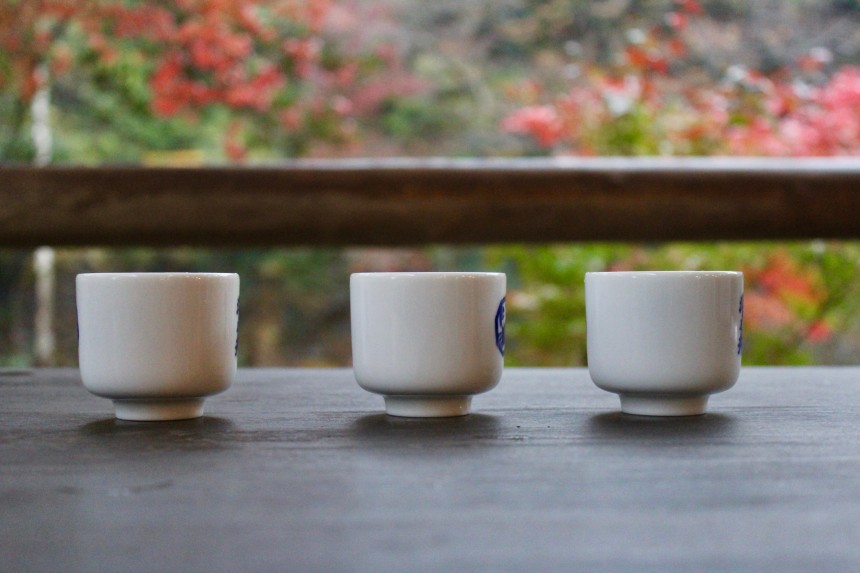 At the brewery, we sat under a large veranda with big, bulbous paper lanterns, sipping on delicious signature sake in the most atmospheric of settings. A fog swept across the rolling autumnal scenery, while the grey-green Tama River trickled along below us. A walking trail snaked under the ginkgo along the river banks, headed upstream toward the distant mountains. The explorer in me dared to wander the path, hoping to find the depths of wilderness at its end. Unfortunately however, I was on a schedule and it was time to make tracks to my next port of call. I vowed to return in the coming weeks. 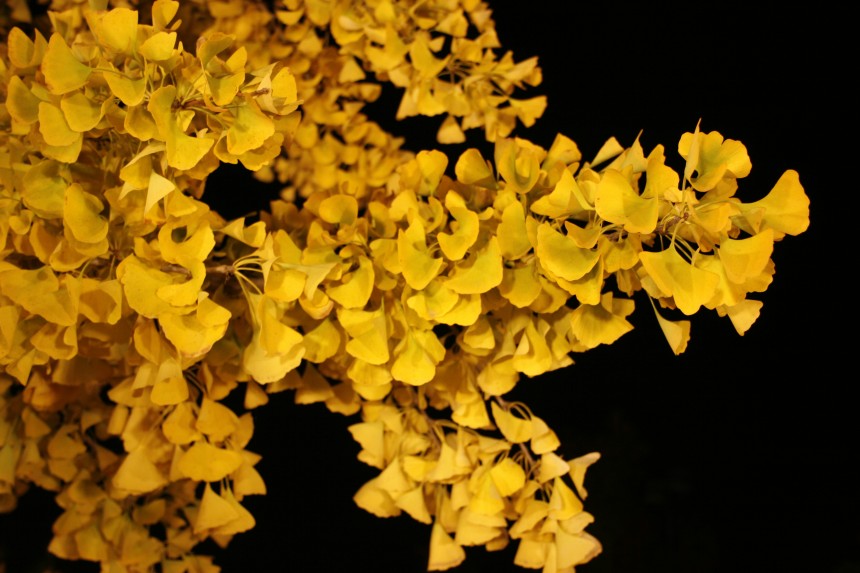 At night, Mitake Valley is like a confined version of the famous autumn illuminations in Tokyo; think Rikugien Garden, but on a much smaller scale. On one side of the river, we passed under polychromatic maples with crowds of others and cameras in tow. On the other side was an even more diverting sight: a resplendent gingko tree, appearing to be etched from gold in the floodlights aimed directly at its fan-shaped leaves. We pottered around for a while before my stomach began to grumble in that peculiar sort of way that makes everything other than food loose its appeal. Thankfully, another top-drawer dining experience was on the cards in Hachioji. 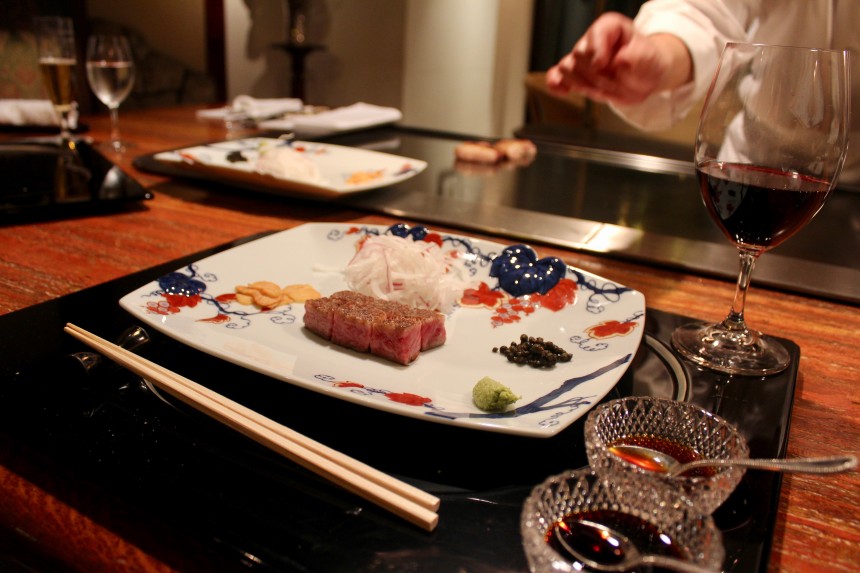 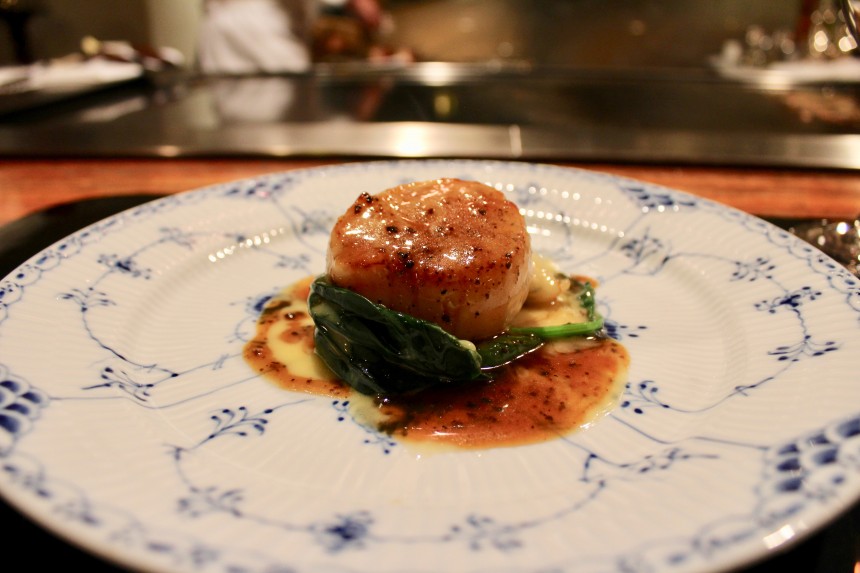 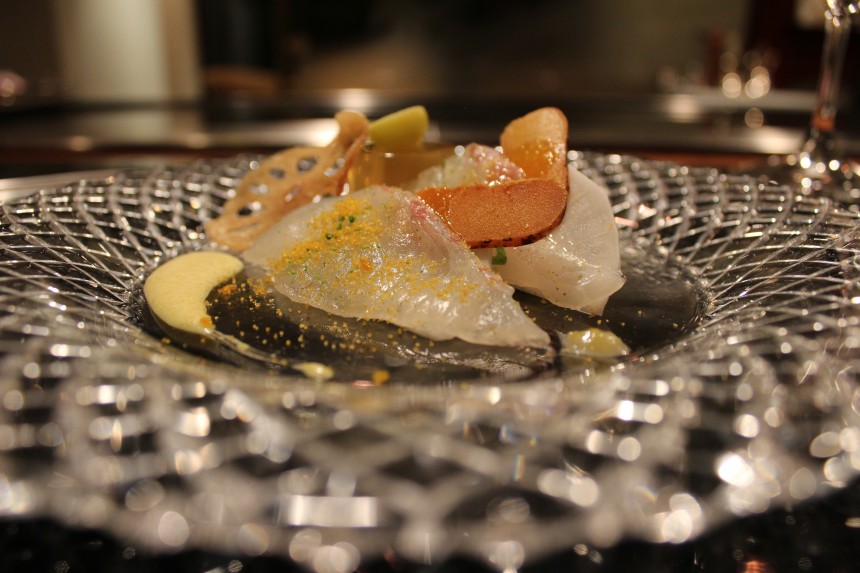 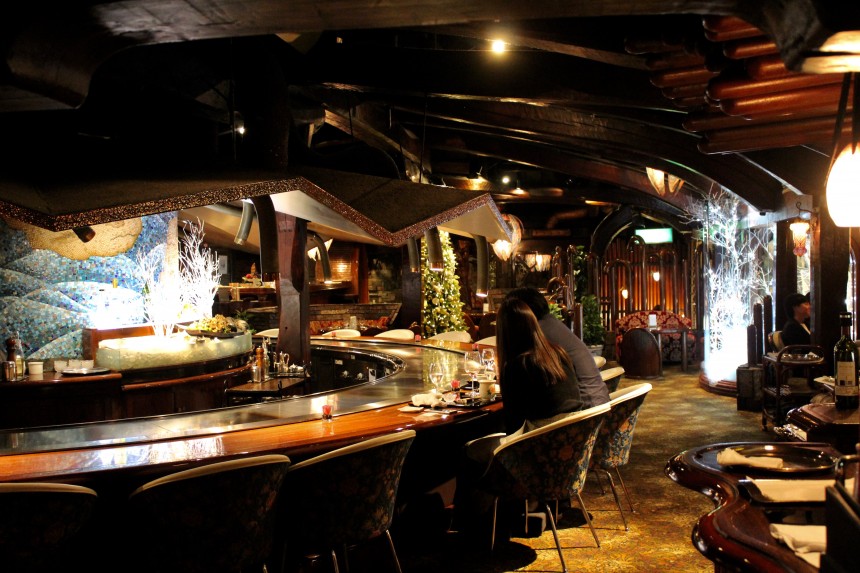 The entrance to Ukai-tei was a tunnel of fairy lights with a sign that read “Joyeaux Noel,” leaving me under no illusions regarding its current theme. Inside was all polished wood, shelves of vintage wine and gargoyle-like iconography carved into the furnishings. Plush red seating, festive wreaths and antique candelabras gave the room a salubrious holiday feel. I was highly impressed, and we hadn’t even tucked into the food yet. 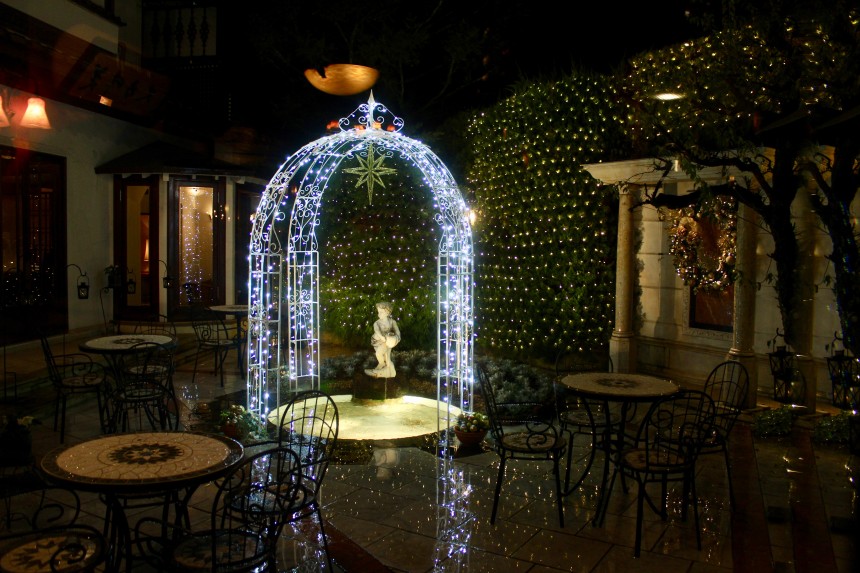 The omakase course was prepped, sliced, diced and fried in front of us on a teppan (steel hot plate) grill by Chef Maruoka, wearing a classic French toque blanche, a nod to where much of the food gets its inspiration from. The Gallic-teppanyaki fusion featured a crab bisque, umami-rich scallops and grass-fed wagyu beef, washed down with a light shiraz. I really didn’t want it to end, and even guiltlessly devoured the lighter-than-air chiffon cake and black sugar cream dessert.

There’s a certain feeling of satisfaction that follows an outstanding meal, which is hard to replicate elsewhere. Where every fiber of your being, every sinew of muscle and neuron of the brain, seems to be unutterably content. That’s how I felt after Ukai-tei. Not a bad way to punctuate the festivities.

The story and night tours were supported by the Tokyo Metropolitan Government (TMG). Learn more about TMG here.