For seven nights at the beginning of February, French artist Sophie Calle presented her short art film Voir la mer every night from midnight to 1am at Shibuya Crossing. The film, about people from Istanbul (who had never seen the ocean) arriving at the ocean and literally seeing the sea for the first time in their lives, played on loop on four of the largest screens in the iconic location. The feat in itself was extraordinary, as permission to use the imposing screens is difficult to acquire, not to mention competitive as various brands pay shocking amounts for these advertisements. However the stunt brought a crowd whose size even these organizers had not imagined. In the wake of the exhibition Metropolis spoke to Calle’s partner for the project, creative film production company NION Founder and Executive Producer Takayuki Moriya.

Metropolis: You worked on the Sophie Calle video installation at Shibuya Crossing this week. What was that like?

Takayuki Moriya: I first met Sophie in France last year. She was exhibiting her works on cats and had already decided on doing a show at Hara Art Museum the following year. I remember talking with her about her desire to go beyond individual exhibitions and explore the realm of film art. Previously, she had shown her piece Voir la Mer at Times Square in New York, and so we began to discuss whether it was possible to replicate that experience in Tokyo. This is what led me to hijack the four main monitors at Shibuya’s Scramble Crossing — arguably a defining landmark of Tokyo.

We reached out to BizReach because we needed support to premiere the piece at Shibuya — without media support we couldn’t use the monitors for just showcasing artwork. Since BizReach was also interested in reaching out to more arts and design companies and investing in the creative field, it was truly a perfect match. So we drew up a proposal and got to work with BizReach to make this event happen. 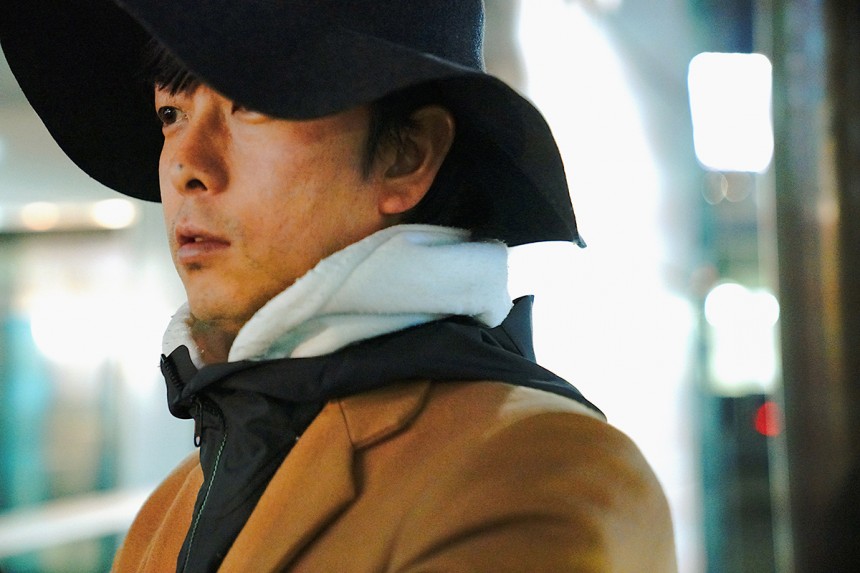 Voir la mer is about a group of people living in Istanbul, Turkey, who — despite being surrounded by the ocean their whole lives — have never seen the ocean in person. The piece touches on themes such as poverty and classism, issues which perhaps do not apply as much to those living in Japan. I thought this subject was interesting because as residents of Japan, we live in a ‘galapagos’ which makes it difficult to relate to those who have never seen the ocean. Thus, I wanted to create an opportunity for Japanese people to question what it means/or feels like to be like the individuals in the film.

The reason why we aimed to premiere this piece at midnight (12-1AM) was because we thought it would gain more recognition. Unlike the chaotic buzz that usually surrounds Shibuya during the day, the city becomes noticeably quieter near last-train. With most of the billboard lights dimmed during this hour, we found that midnight was the perfect time to hijack the screens and capture the audience’s attention. Honestly, I didn’t think that many people would show up since we hardly did any press or SNS postings about this project.

Yet when I showed up on premiere night, I was blown away by the sheer number of people gathered at the crossing. As the countdown started, a hush fell over the crowd as roaring sounds of waves crashing on the shore rang through the intersection. A majority of the audience looked up in awe, some clutching their cameras while others began to cry. A few called their boyfriends/girlfriends to relay the experience. Sophie was one of them. I realized that a lot of the attendees hailed from Sophie’s Hara Museum exhibition, and among them were notable figures such as legendary architect and photographer Hiroshi Sugimoto.

I’m glad I got to take part in this pivotal experience as it pushed the envelope in terms of what it meant to create and produce art. It’s interesting to see the audience react to the work in live time, as opposed to simply exhibiting the piece in a museum, as it adds to the whole experience of production. To observe their confusion and awe for the project fulfilled my desire to create work which evokes inexplicable emotions out of people. I want to produce art which makes people question what it is they’re seeing — to make them understand that there is no correct answer to what they’re experiencing. I want people to feel uneasy and emotional towards my art.

Especially in the age of digital media, ‘sharing’ is a vital component of spreading one’s art. I strived to produce a piece which allows people to easily share art — to make ‘shareable’ pieces. I think this is important not only for recognition but in order to open people’s eyes to the inevitable issues we will face as a society. Japan will no doubt face numerous issues in the future but many remain ignorant of these problems. So, along with BizReach’s goals, I created 30-something messages/copies to attach at the end of the film — one being “creating to change.”

I genuinely hope to continue projects like these in order to inflict change to society. Japan has an impressive history of creating art, but continues to lack spaces to create and showcase these works. In summation, Japan needs to invest in production, focusing on how to exhibit and produce experiences to appreciate art. Although there is a growing trend in events as a form of promotion, I think there is still a gaping hole within the film industry for producers. Thus, I hope to do more projects like Sophie’s video installation and gradually change the discourse in production in Japan.