Take Me to Habana

At Cafe Habana Tokyo, fusion to write home about from across the puddle

The news dropped nearly two years after I moved to Japan from New York City: Cafe Habana, an NYC staple with lines snaking around the block and Mexican-Cuban fusion to write home about, had joined the ranks of New York eateries that have hopped over the puddle and set up shop in Tokyo.

Harumpf. The pride of being a long-time New Yorker revved up. Why try to overextend a good thing? It wouldn’t be the same in Tokyo–and it definitely wouldn’t be as good. 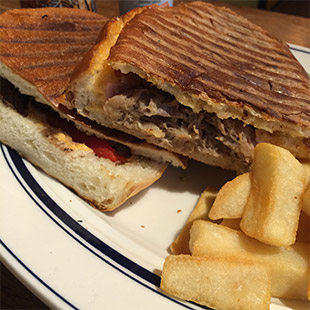 Cafe Habana’s famed grilled Cuban sandwich, with citrus-marinated roast pork, sweet ham, swiss cheese and a thinly sliced pickle, was voted one of the best sandwiches in NYC. I once waited in line for two hours to get my hands on one. And when you’ve waited that long to eat at a place, you almost hope that it won’t be as good anywhere else.

Armed with a skeptical attitude and a long-nursed hankering for a Cuban sandwich–any Cuban sandwich–I wound through the backstreets of Shibuya and arrived at Cafe Habana Tokyo for a late lunch on a Sunday.

There was no line outside the brightly painted building. I walked right inside to see strings of hanging lights and a painting of Che Guevara on a mustard colored wall. It felt like an outdoor BBQ in a neighborhood park. And against my every instinct, I liked the fun vibe.

But of course, the real test is the food. I wanted to maintain my pride. I wanted to feel smug. I did not want to like it.

But I did. I really, really did.

I regret to report that the Cuban sandwich (¥800 for a half) is just as satisfying as its NYC counterpart. The pork is tender and citrusy, the pickle crunchy, the grill marks are still fresh on the thick and crusty bread. This sandwich sounds simple, but the satisfying salty-sweet fusion rockets you out of Japan and into the Caribbean.

The grilled steak torta sandwich (¥900 for a half) packs a lighter, simpler flavor. Grilled red peppers taste fresh against the hearty steak, and a light layer of chipotle mayo keeps it all together. These sandwiches are big–try half a Cuban and half a torta to keep your taste buds on edge.

Between bites of sandwich, nibble on a side of salty tostones (¥600), deep-fried plantains that hit the crispy-on-the-outside-soft-on-the-inside jackpot. Dip them in the tomato-based chipotle side sauce and throw in a couple drops of Marie Sharpe’s hot sauce (included on the side) for an extra kick. 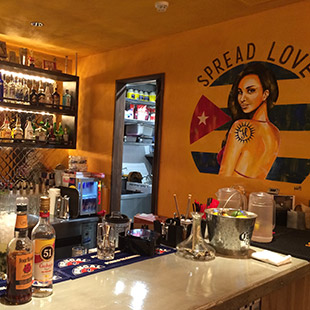 If you’re feeling adventurous, you can chase it down with a Chocobanana Cuba Libre or Marshmallow Fizz (both ¥1,000), but I suggest going for a good old beer. With this food, you’re going to want to guzzle, not sip. The Day of the Dead Porter (¥800) is a nice step up from the draft, and the smoky flavor is still light enough to wash down your grub.

And don’t fill up before also getting a taste of the Mexican grilled corn (¥600). Salty Cotija cheese coats the piping hot cob, and a sprinkling of chili powder leaves a satisfying bite. Squeeze on some lime for a little zing.

Skip the dessert menu and order the sweet plantains (¥500) to top off your meal. This order runs on the small side, but a few tastes of the nearly-caramelized fruit will be the cherry on top.

After my meal, I gathered up the pieces of my pride and reluctantly admitted that Cafe Habana Tokyo soared past my expectations. Only one question remained: at such a great place, why wasn’t there a line? If Tokyoites knew what was good for them, they’d be lining up around the block to eat at this joint.

Near 5 o’clock, I finally stepped outside. Clusters of people milled around the entrance, eagerly waiting for their names to be called.

Johanna Mayer is a freelance writer and English teacher living in Shikoku.