For those who do go chasing waterfalls

The list of rules was staggering: “No photos,” “No underwear,” “No bath afterwards,” “No talking to and from the site,” “No third party tours” … and, perhaps most surprising, “No sex.” In fact, we were reminded of the last rule quite a few times—even at dinner. Upon seeing us, a couple, we were admonished with: “Remember, no sex!” Apparently takigyo, the ancient Japanese waterfall ritual, was more complicated than just a quick splash.

Takigyo, also called misogi, involves the cleansing of the mind and soul through a Shinto purification ritual. The “cleansing” occurs under a powerful mountain waterfall, which clocks in at a mind-numbing 10 degrees Celsius: a pain meant to evoke pleasure. The ritual is led by a Shinto priest who directs participants in a series of warm-ups, songs, and chants meant to cleanse oneself in front of the Gods and release impurities. Male participants perform the ritual while wearing a fundoshi (an undergarment akin to a diaper), while females sport a short white robe, leaving much more to the imagination. Afterward, at home base, a short ceremony is performed and a hot breakfast is eagerly consumed. 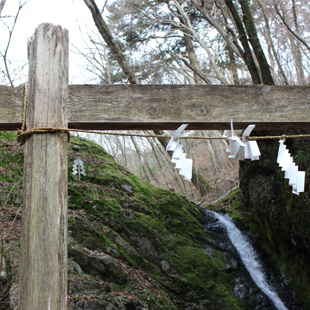 While few priests offer takigyo to the general public, 59-year-old Baba Yoshihiko has been providing courses since 2000 from Mount Mitake, a popular hiking destination west of Tokyo. Yoshihiko manages Komadori Sanso, a guesthouse close to Mitake Shrine that has been open since 1776, often accommodating hikers and pilgrims. These days, however, the guesthouse is seeing more visitors, especially foreigners, who are interested in the exhilarating chance to experience takigyo. Yoshihiko leads the ritual, in both English and Japanese, almost every day of the summer, and once or twice a week during the other seasons, depending on demand.

Yoshihiko himself received his one-week takigyo priest training back in 2000 on Mitake, taking part in a cleansing every morning and evening. His love affair with water spans a lifetime. An avid water skier when he was younger, he actually tried takigyo for the first time at the age of 19.

“Water makes my heart feel good,” he told me after we finished the training. And I’m not surprised: Yoshihiko is the 17th-generation member of his family to practice takigyo. So it seems that it’s not only in his heart, but also his blood. 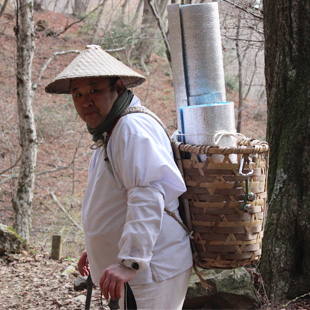 Our own training started at 5am. Upon making my way out, the lady of the guesthouse pulled me aside and dramatically whispered in Japanese something to effect of, “Seriously, no bra. No panties.” They mean business!

Before we left, Yoshihiko informed us of an additional rule: “Don’t look behind you on the way to the waterfall.” Instead, we were instructed to walk in silent meditation and only focus on what’s ahead. With plastic bags in hand, we set off at dawn, treading along quietly for 30 minutes as we solemnly anticipated the waterfall’s inevitable temperature. The only sounds were bird calls and Yoshihiko’s hiking bell, which is meant to ward off bears. Considering we weren’t allowed to look behind us, perhaps the bell was a wise investment.

Upon arrival, we split up to our respective areas to change. Being the only woman, I was directed to a private tent around the corner before rejoining the now mostly naked group of men. We spent about 30 minutes warming up. I chanted “haraedo no okami” (“God which serves to clean the body and heart”) over and over. I yelled at the mountain. I shook my hands and sliced the air, symbolizing this and that. 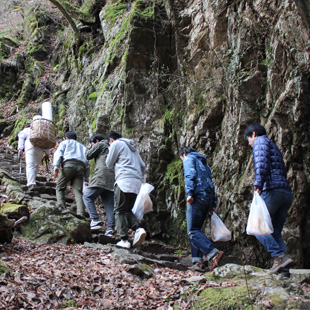 I don’t want to give too much away, but the actual waterfall part was definitely a shock to the system. And it’s a shock you experience three times, as per ritual. Clothing becomes see-through, but being in survival mode, no one cares. The cold, deep in my bones, was felt for hours.

Though I don’t need to experience takigyo again, I can understand how Yoshihiko reaps benefits from such an energizing early morning stimulation—much stronger than coffee. And even with an absence of sex, photography, or adequate clothing, the experience is certainly one for the books.