Tokyo designers find inspiration from the likes of Godzilla and Ultraman

Tokyo street fashion has been feeling a little bit too peaceful these days. Photo-hunting tourists, believing that they’re on safari, have chased away much of the talent from Harajuku, and mainstream tastes for norm-core are limiting the extremes, even while the overall standard stays high. With that in mind, it’s worth remembering there are those fighting back and making the case of fashion for fashion’s sake, a means of transcending the everyday and living, albeit temporarily, as someone—or something—else.

The world of tokusatsu (Japanese special effects films), and its offshoot kaijū (monster films), is at the heart of Japanese popular culture. Yet until recently, it has remained relatively under-explored in fashion, a fact made more remarkable by remembering that there was always a human tucked away inside Godzilla—someone was already wearing Godzilla. And while I can understand that even Tokyo isn’t ready for a fashionista clomping their way through its backstreets channeling Godzilla verbatim, the beast of fashion, always hungry for inspiration, has been slow in realizing this aesthetic in reality. That is, until now. 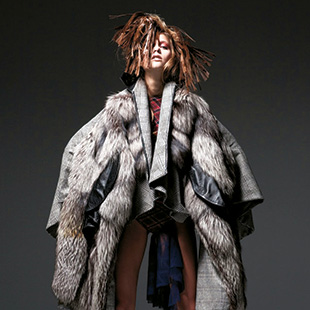 Arguably the first proponent of the tokusatsu fashion genre, Takashi Nishiyama shot to fame straight out of the Coconogacco fashion school, winning the coveted “Fashion Collection of the Year” from ITS in 2010 with his very first collection, inspired by the popular video game Monster Hunter. From there, the monsters kept getting bigger and bigger; and while he did toy with his own takes on heroes by offering a biker take on Ultraman, it’s the sinister, mutated, or gargantuan that the diminutive designer advocates.

Core to the young designer’s style are heavy-set shoulders with long hanging layers that actually blend well with the tastes for hip-hop style seen everywhere in menswear right now. His Godzilla-inspired output takes this to its logical conclusion, with a fanged hood, huge rounded shoulders, and heavy hanging layers all rendered in a tangle of distressed leather, ripped denim, and glossy nylon reflecting the scales of the beast perfectly.

With those high-profile success stories and funding behind him, Nishiyama moved away from the grimy end of the monster spectrum and started working with luxurious materials to achieve the same effects. His recent experiments in fur, exotic leather, and top-of-the-range silk all explore different aspects of the monster aesthetic, without compromising the scale of his vision. Interestingly, he insists that every item from his collection can technically be worn, with robotic shields turning into clutches, and alien heads unzipping to reveal that they are bags in disguise.

With every step, Takashi Nishiyama gets closer to getting his work worn by fashion civilians, and now that he has kickstarted a whole wave of others to follow in his path, it might just catch on faster than you think. 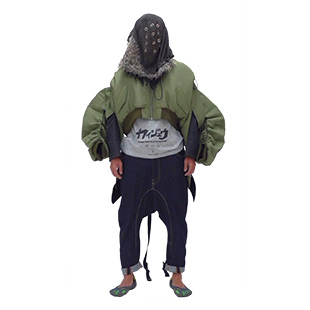 Following in the lineage of Takashi Nishiyama, young designer Sugimoto Chiharu was also inspired by kaijū monsters for her graduate collection, winning the 2014 Tokyo New Designer Fashion Grand Prix in the process.

Her recent output focuses more on the idea of mutated humans.

Under the banner of “Tokyo Militia Propaganda,” her gang of masked models’ allegiance is not entirely clear, but are all the cooler for it. 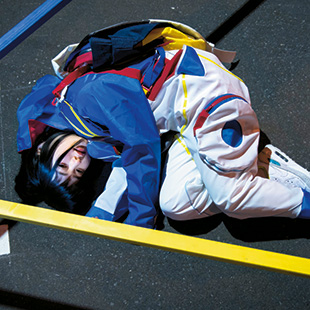 A new entry on the underground scene, Xeno Avatar brings the idea of kaijū right up-to-date with the new wave of feminized anthropomorphization of beasts currently in vogue in anime and manga.

The brand is the work of an entirely anonymous designer … well, I could tell you, but I think it’s better to think that this fashion label just popped out of a glitch in the cosmos. At any rate, the construction and patterning is on another plane of reality altogether.

A Man of Ultra

For those who can’t quite find a place in their wardrobe for some of the more extreme tokusatsu-inspired fashion, a new project from Eiji Tsuburaya’s cult series Ultraman might just be for you.

The “A Man of Ultra” project permits absolutely anyone to create their own fashion or accessory collaboration with the series, in any manner of their choosing, as long as they contact the project in advance online and don’t use any of the imagery from the series entirely directly.

So far a lot of Tokyo talent, including Guild Prime, Jam Home Made, Loveless, and Okayama’s Momotaro Jeans, have gotten involved. And if you want to join them as a fellow Man of Ultra, then you only need apply.