The Mayor of Nowhere

On the last Friday in July 2018, a car with speakers mounted on the roof pulled up to the TEPCO headquarters near Hibiya Park. At a little past 5pm, the utility’s employees began streaming out of the building and, as they glided through the automatic doors, recognition flashed over their faces. As they turned toward the Shinbashi nightlife district, the office workers shot sour looks at the man in the blue-and-yellow sash, who stood in front of the car.

“You should take responsibility. How can you just walk by? You are polluting Fukushima’s waters,” he yelled into a microphone, blasting the company for its actions since the triple meltdowns at the Fukushima Daiichi nuclear power plant.

Masami Yoshizawa was running for mayor of Namie, one of the seven cities, towns and villages surrounding the damaged power plant that remain under partial evacuation orders. As part of his campaign, he’d come to TEPCO to deliver a letter outlining his plans to take the company to court for damages and to demand the utility cancel plans to release tons of radiation-contaminated water into the Pacific. 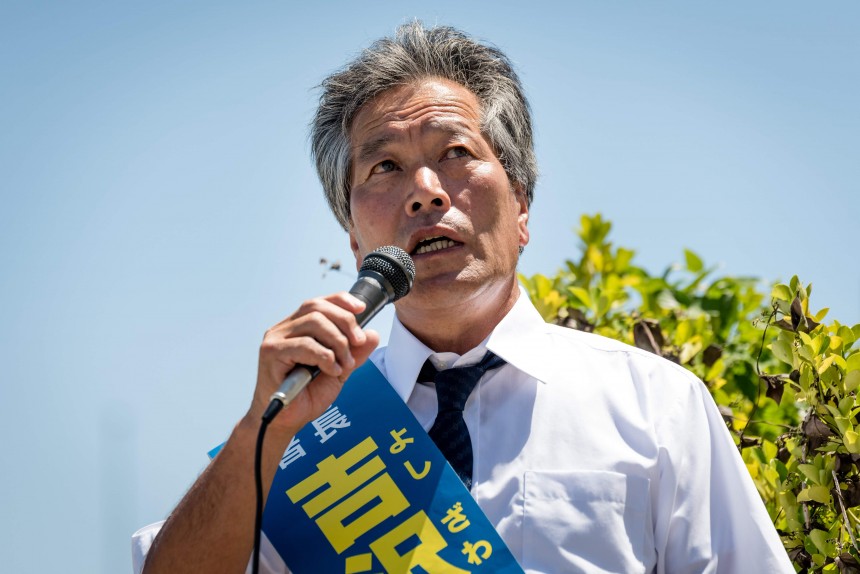 Yoshizawa had spoken in front of the headquarters before. The first time was in the days following the earthquake and tsunami on March 11, 2011. Back then, he’d held out as long as he could on his ranch, 14 kilometers from the power plant. Once it became clear that his herd of 328 Japanese beef cows had lost all their value — the animals had been worth over ¥450 million before they were exposed to the radiation released from the plant — he decided to go to Tokyo to make his voice heard. After driving down, he walked into the scrum of police and news vans that surrounded the TEPCO headquarters and demanded to speak with someone from the company. Though the police seized him by the arms, he didn’t give up until a representative from the utility eventually agreed to listen to his complaint.

After returning to Fukushima, he started visiting his ranch to feed his animals, unwilling to let them starve. Eventually, he decided to ignore the mandatory evacuation order and began living on his land again. In his youth, he’d been part of the Japanese student movement and this experience informed him as he poured his energy into the anti-nuclear campaign: he hauled his irradiated cattle down to the Ministry of Agriculture and made impassioned speeches in Shibuya and Sendai, attempting to raise awareness of the plight of farmers and ranchers around Fukushima Daiichi. His land, which he renamed the Ranch of Hope, became a hub for activists and environmentally-minded volunteers, who came to support him and help take care of the cows.

Then in June of this year, Tamotsu Baba, Namie’s three-term mayor, resigned. He had stomach cancer and, two weeks after stepping down, he passed away in a hospital in Fukushima City. A special election was scheduled for August 5 and Yoshizawa declared his intention to run.

He withdrew his membership from the Japanese Communist Party and created his own group, the Organization for a Hopeful Namie, though his politics retained a radical tinge. He promised to force TEPCO to increase damage payments by 50 percent and to support local farmers by using the town’s contaminated fields to grow rice for use in ethanol. He railed against the Abe administration’s plan to hold the 2020 Olympics in Tokyo and decried the sunnier visions of the recovery effort: in his view, no more than half the town’s residents would ever return. “As a town, Namie is finished,” he often said during his speech, suggesting that the population would dip below 10,000. “In the future, Namie will be a village.”

In some ways, Yoshizawa’s policy positions were less important than his stance toward the recovery effort. Of the 17,791 officially registered residents, only 777 have returned to live in the few dozen square kilometers where the evacuation order has been lifted; thus, being mayor of Namie effectively means being the leader of a town that exists mostly on paper. More than anything, the election was a way of gauging the mood of the voters, most of whom had been evacuated from their home for over seven years.

This was a point Yoshizawa stressed to the TEPCO employees, who were heading out of the office to enjoy their Premium Friday: “We can’t go home! You have houses to return to, places to work. But we can’t return to Namie. Our town is ruined, our lives are crushed.” 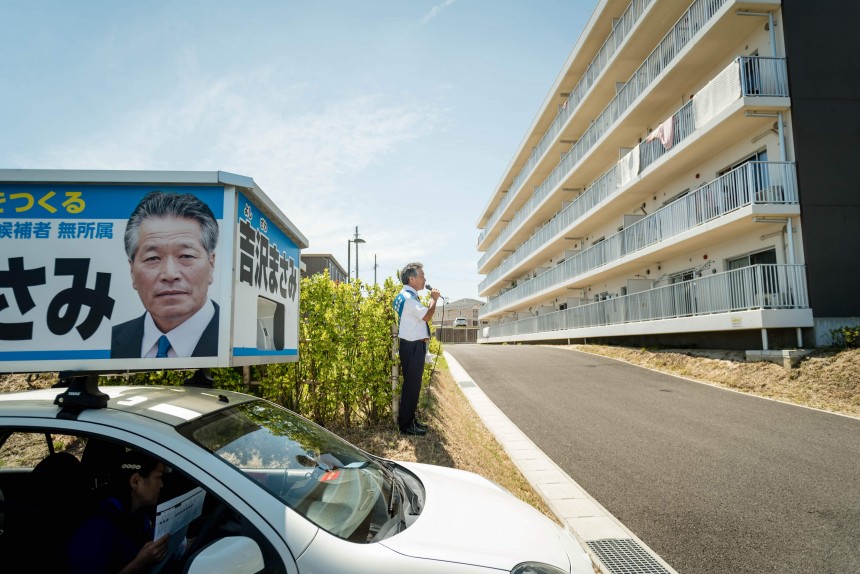 The following day, Yoshizawa campaigned in his home prefecture. After the evacuation, Namie’s residents had been dispersed across the prefecture, with the bulk winding up in Fukushima City, Nihonmatsu, Koriyama and Minamisoma. Evacuees initially lived in hastily constructed temporary housing, but facing the prolonged recovery effort ahead, the prefectural government built “recovery homes” — apartments and blocks of single-family houses — and is now moving the nuclear refugees into these units.

Late in the afternoon, Yoshizawa’s car pulled up to a series of oblong three-story buildings. He stepped out, placed a plastic milk crate upside-down on the sidewalk, and stood on it as he launched into his stump speech.

Three volunteers working for his campaign watched for anyone who stepped outside to listen to him or who happened to be crossing the parking lot as he spoke. If they spotted a potential voter, the volunteers sprinted to them — even if this involved several flights of stairs — and handed them a flyer, asking for their vote.

As Yoshizawa’s rhetoric echoed through one corner of the apartment complex, a white van pulled up to the opposite corner, and a man with a bullhorn got out. Kazuhiro Yoshida had been the head of the former mayor’s support group and was Yoshizawa’s only opponent in the election. Like Yoshizawa, he was deeply tanned, with rough features and a straightforward manner. But unlike his rival, Yoshida’s message was one of continuity: the handpicked successor of the previous mayor, with connections to the ruling Liberal Democratic Party, he promised to press forward with the recovery plans, such as they were. He spoke optimistically about reconstructing Namie and rebuilding a local economy based on agriculture and fishing.

Yoshida’s quasi-incumbent status was confirmed by the sparse nature of his campaign. He had no flyers or banners, not even a business card to hand out to inquiring media-types. No volunteers flanked him, and, if you removed the references to disaster and recovery, his policy proposals could’ve been meant for any struggling town in Tohoku: create a safe and secure environment, support the elderly and so on.

These contrasts were not lost on the handful of voters who spilled out of the apartment blocks to listen to campaign speeches. One former store owner in her 60s planned on voting for Yoshida, and was realistic about the future: “I think I won’t ever go back… Still, I want them to make a town where it’s easy to live again.” A middle-aged man from the coastal district of Ukedo said his vote wasn’t decided, but that the most important thing for him was stability.

Meanwhile, many of Yoshizawa’s voters were more inclined toward extremes of optimism or despair. Yoko Konno, who had owned a salon in Namie’s Gogendo district, wasn’t planning to move back, as her children had relocated and she needed to be near a hospital so she could get treatment for her heart condition: “There’s no one left in Namie.” By contrast, Shiba, the head of the residents’ association in a different public housing block, said, “I want to go back. We need to make a new plan though.” 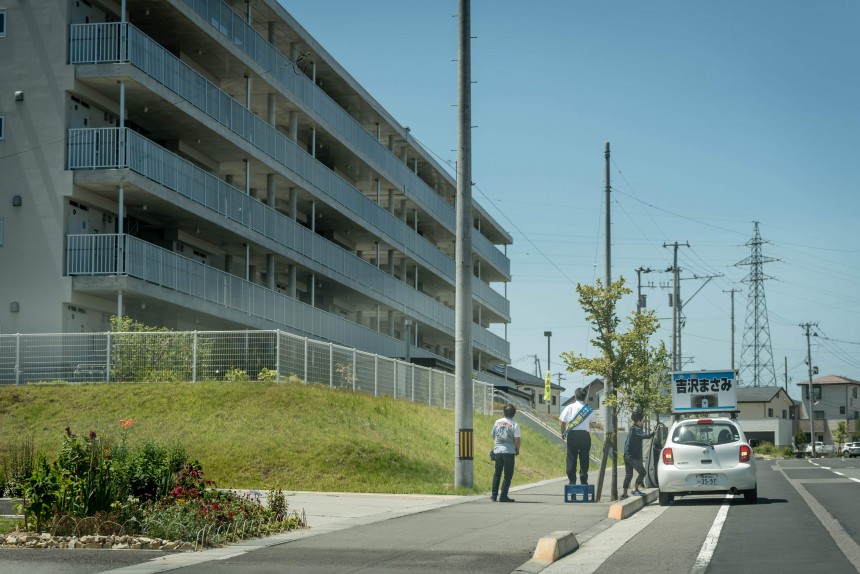 Yoshizawa’s volunteers were a collection of journalists, animal lovers and activists. The campaign was a kind of traveling, temporary family, and, as with any middle-class Japanese household, lunchtime was likely to find them in a family restaurant, as was the case two days before the election, when they stopped at a tonkatsu (fried pork cutlet) place in a residential neighborhood of Koriyama.

Most of the team was drawn from Ranch of Hope volunteers, like Masakane Kinomura, a photographer for the Asia Press Front, who had first learned about Masami Yoshizawa and the Ranch of Hope through a fellow journalist. He pointed across the table with his chopsticks at a volunteer named Monguchi, “I was coming back from the ranch and she picked me up in her taxi in Tokyo.”

She brushed a braid of dyed red hair behind her shoulder. “When I picked him up, I thought he was just some tired middle-aged man. But then the way he talked about caring for these 300 cows. I couldn’t see his face, but I could tell he was a good person.”

Originally from Osaka, she had never volunteered until the Kumamoto earthquake damaged her grandmother’s house. After her first experience, she wanted to do more to help, but Kyushu was too far. She had always loved animals — a quality which helped her connect with pet-owning voters — and the chance to be close to the cattle led her to the Ranch of Hope.

Next to Monguchi was Ohamazaki, an outside political consultant and the only paid member of the campaign staff. With the sleeves of his dress shirt rolled up and his tie pulled away from his collar, he exuded a sense of business. “I’ve worked with the Liberal Democrats, Communists, Independents. Over 200 elections.” With his help, he believed Yoshizawa could win as many as six in ten voters, though turnout would be low. In the previous mayoral election, over half of Namie’s residents had voted, but he believed the percentage would fall in the summer’s election. “People have moved here and there, so it’ll be closer to 40 percent.”

On this point, Ohamazaki proved right, as 43 percent of residents went to the polls. However, the result of the election would fall against his client, with 80 percent of voters opting for the stability offered by Kazuhiro Yoshida. Despite all they’ve been through (or perhaps because of it) Namie’s voters weren’t interested in a new, more confrontational approach. In some ways, the story of this mayoral election in the exclusion zone, echoes one of the problems facing the Japanese political left as a whole: an inability to show voters — even those who are disenchanted with the status quo — how a narrative of resistance and change will impact their lives for the better.

In the weeks since the election, Masami Yoshizawa has returned to his ranch, where he herds his irradiated cattle over the green hills of Fukushima. Namie Town heads into its eighth year of recovery, its future suspended in uncertainty, with no end in sight. 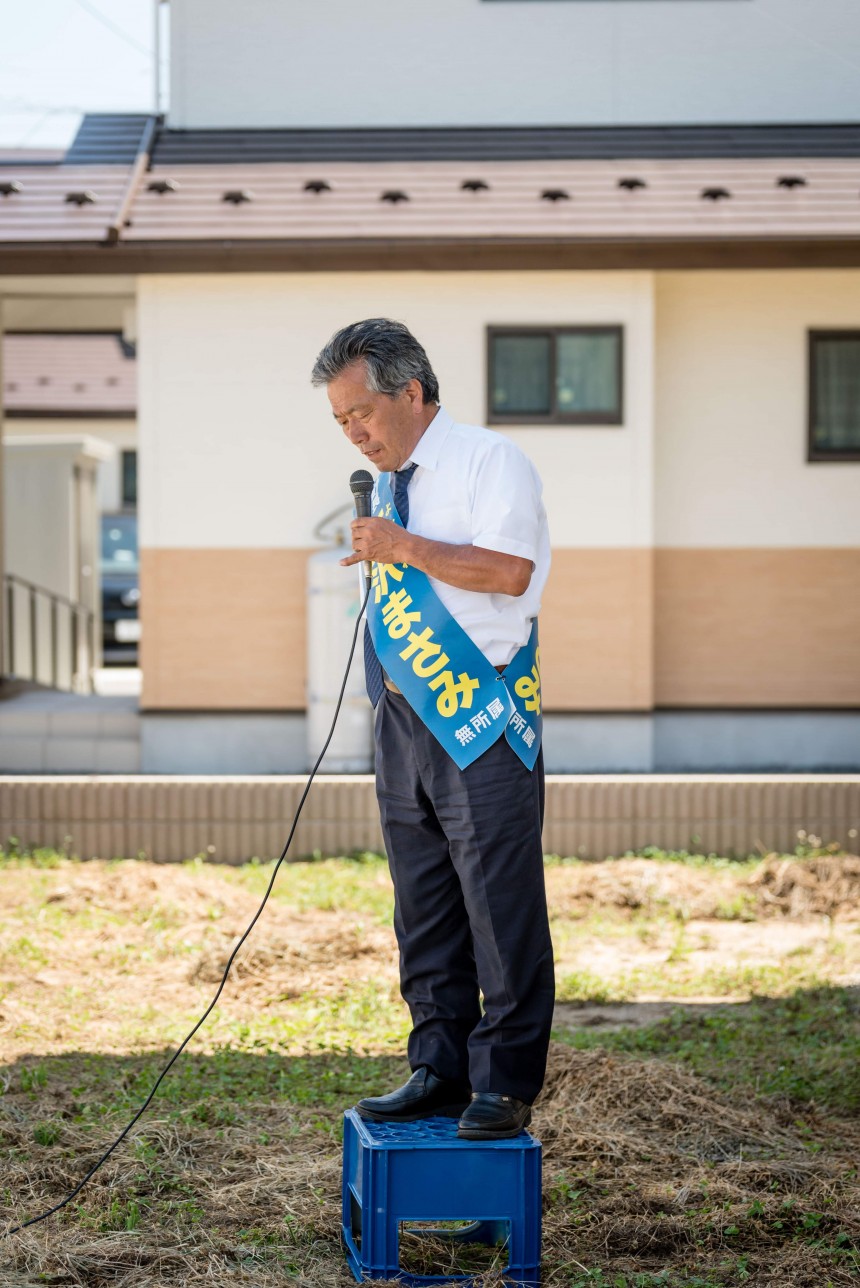 Michael Larson completed his MFA in Creative Writing at the Ohio State University. He is currently working on a nonfiction book about the experiences of survivors of the Great Tohoku Earthquake and Tsunami titled When the Waves Came. You can read more of his work at mwlarson.com.