During my COVID-19 gap year from Yale University, I worked as a priestess at a Japanese shrine. Okay, it isn’t as dramatic as it sounds, but “priestess” is the best translation I can think of. More specifically, I worked as a miko-san. From selling omamori amulets to dancing at important ceremonies, my role was to help out with tasks around the shrine. I’ve seen English writings refer to miko-san as “shrine maidens” before, but I shy away from this translation as it seems to place emphasis on the youth and purity of the miko-san, and although this historically holds true, often times the modern miko is just a college girl who has a vested interest in shrines and Shintoism. 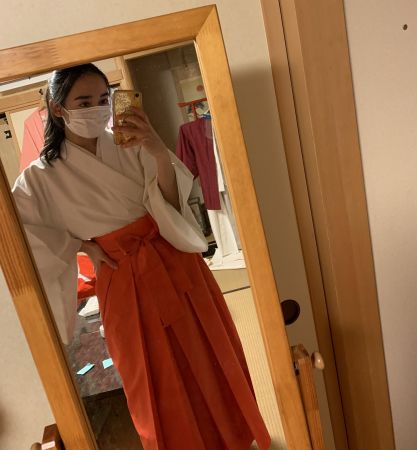 Me in the miko hakama circa January 2021

This is embarrassing to write on paper, but my original interest in becoming a miko-san actually stemmed from its apparel. I wasn’t raised in a very religious household, and I didn’t know the deep-rooted values and customs of Shinto shrines. Besides, I was technically Catholic. Was a miko-san something I could just be out of interest? So, like any great researcher, I Googled it. Sure enough, shrines in Tokyo looking for help popped up. One of them, the Akagi Shrine in Kagurazaka, only a few stations away from where I was staying, stood out to me. With a grand marble staircase leading up to the glass-walled building of the shaden (the main shrine where the God is housed), I’d never seen such an architecturally modern shrine. They also had a cafe. Figuring I had nothing to lose, I sent them an email. They responded within the day. I went in for an interview that week.

On my first day, I had no idea what to expect. The head miko, Udagawa-san, taught me how to get into my hakama straight away. I felt like I didn’t really have the right to be in uniform so soon. I tied my hair in a low ponytail and looked at my reflection, and for the first time I realized: I looked, well, legit. But what if a visitor asked me a question, thinking I’m a seasoned miko, and all I can do is look at them with wide eyes and frantically call for help?

I didn’t really have anything to fear, though; the first tasks I did as a miko were simple. As it was mid-fall, the stairs were covered in yellow leaves from the painstakingly trimmed trees. Udagawa-san pressed a bamboo broom to my chest and sent me on my merry way. I did a lot of other small tasks, like making goshuin, a sheet of paper with stamps and calligraphy that serves as proof of one’s visit to the shrine, selling amulets and guiding visitors during ceremonies. The guji-san (head of the shrine) told me to constantly observe, and to learn through watching. I loved watching the ceremonies – I would stand in the corner of the shaden with my hands lightly clasped in front of me as the guji-san would ward off bad spirits and pray for the patrons in carefully practiced movements. I even got to beat the wadaiko drum sometimes, to mark the beginning and end of each ceremony. 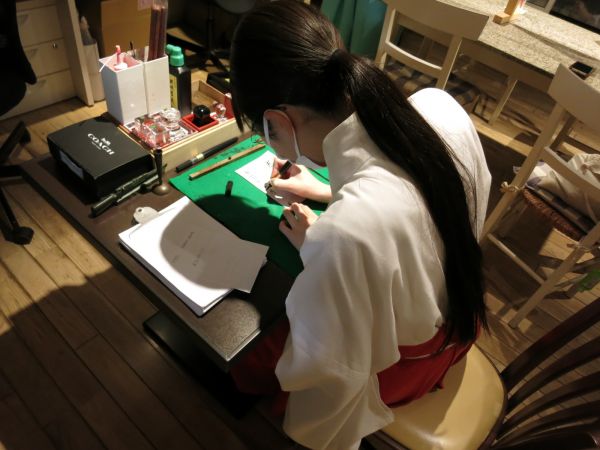 Because the main god at Akagi Shrine is the god of fire, a lot of the big events I helped with centered around passion, love, and success. I watched parents bring their infants to their hatsumiyamairi (rite of passage for newborns), companies come as a team to pray for good business and even fancy cars that still smelled like the factory being brought in to be purified for safe driving. I helped at weddings, where the bride and groom in their pristine marriage kimonos walked to the dissonant, eerily beautiful music of the Japanese bamboo flute. I even attended a “big hit ceremony,” where the cast for a soon-to-be-released movie came to pray for box-office success, journalists and cameramen recording the whole event. Even though he never really said it, I had a feeling the guji-san liked having flashy events take place at his shrine.

The guji-san, a gruff yet humorous man with a tendency of giving out gifts to everyone around him, was born into Shintoism. His grandfather became the guji at Akagi Shrine, after samurais found themselves jobless. It wasn’t like the guji-san was chained to his fate as the head of the shrine; although they often are, the guji doesn’t have to be connected by bloodline. In fact, after passing an exam (not unlike the MCAT or LSAT), truly anyone can become a shinshoku, a priest allowed to conduct ceremonies.

The guji-san has outwardly told me he’s not particularly devout but invested in the preservation of Japanese traditions. And he doesn’t hide the fact that running a shrine is often like running a business. Unlike Buddhism or Christianity, Shintoism doesn’t openly ask for donations, and even though it is the national religion, Japan doesn’t currently offer financial support for struggling shrines. The guji-san often worried about less-popular shrines that didn’t have a steady stream of guests and told me that in coming years, many smaller shrines may be forced to close down. He would often task Udagawa-san with technical jobs, like responding to emails and heading to the bank.

Unlike the guji-san, Udagawa-san wasn’t raised in a Shinto family, but always loved shrines. In her fourth year of college, she found herself at a loss for what she wanted to do after graduation. While job hunting, she happened to come across a job posting for a nearby shrine.  Realizing working at a shrine was a possible career path, she dug deeper. After some research and feeling a connection to their approach to shrine visitation as something accessible and interesting, she reached out to Akagi shrine. The rest is history. 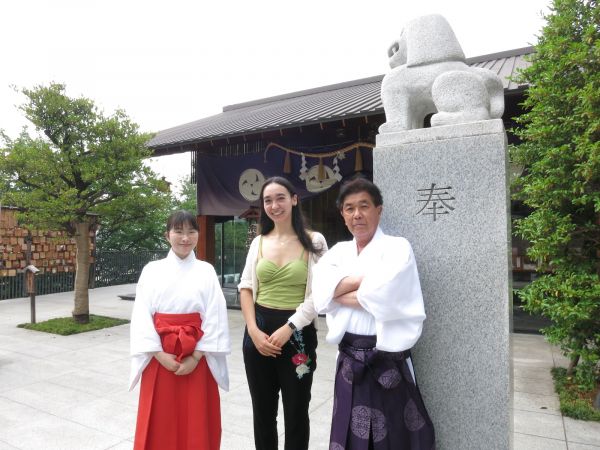 Udagawa-san (L), the guji-san (R) and me in front of the Akagi shrine shaden

Observing the friendly service Udagawa-san and the other miko were capable of, I quickly realized a big part of the job as a miko-san was being an accessible (and not as intimidating) resource for patrons visiting the shrine. From asking where to place donations, to whether there was a bathroom they could use, visitors often feel awkward bothering shrine officials. The miko-san, however, who are young women with an open demeanor, appear easier to talk to. At several ceremonies, guests would look at me with apologetic “help me” eyes, not knowing where they were allowed to sit, and I’d gently guide them.

For the New Year, the biggest holiday in the Shinto tradition, I ended up working at Otori Shrine. As the clock struck midnight and the calendar year moved from 2020 to 2021 – or, if we’re being thematically appropriate and referring to years in Japanese eras based on the Shinto emperor, from two to three – I was selling amulets and hamaya (New Year charm in the shape of an arrow) to a crowd of shrine-goers. The patrons were mainly respectful, but I was politely amused by some rowdy visitors, drunk from their New Years parties, and a little shocked to deal with a couple of straight-up rude guests, who outwardly complained about how slow we worked. I laughed under my breath at their audacity; even if they didn’t think me intimidating, they were in the presence of a god. If anything was a bad omen, it would be bad-mouthing a miko-san on New Year’s Day.

When my shift ended, I got out of my hakama, shivering from sitting by an open window all night. I helped a girl who had never worked a part-time job before, let alone as a miko, into her hakama. She was 16 and bright-eyed, and so short that the white kimono top that would rest on my shins dragged on the ground for her. I shortened her top by folding the cloth at her waist, already feeling like a senpai.

I worked a few more shifts at the shrine that year, but as the busiest Shinto holiday came to a close and my other obligations picked up, my time as a miko-san met its natural end. For now. 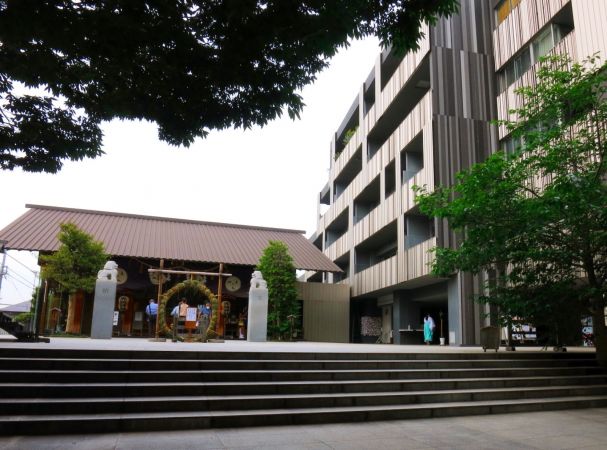 The Akagi shrine on a July afternoon

Shrines always had a special place in my heart, but after my time as a part-time priestess, my love for shrines is less pin-pointed but all over. Whether because of the inexplicable, sacred energy or the respectful hush that falls over its grounds (I have an inkling it’s a combination of both), shrines instill in me a feeling of reflection and calmness I don’t experience anywhere else. But Shintoism has always been inextricably imbued in Japanese culture, imbued in me, way before I started working as a miko-san. Simple things like saying itadakimasu before a meal, or taking off your shoes inside a house as a sign of respect are the epitome of Shinto morals.

I won’t pretend I’m an expert on religion or Shintoism, because I’m not even close. There are centuries of history and traditions I couldn’t possibly learn it all in the span of a few months. If you think about it, the Declaration of Independence wouldn’t be written for another 500 years at the time Akagi shrine was built, and it’s not even a particularly old shrine. I may not know what all the words mean during a ceremony, but my experience as a miko-san lives within me in my instinct to bow when entering a shrine and in the muscle memory in my fingers when tying a hakama. So the next time you see a shrine, whether it’s tiny and wedged between brand new office buildings, or grand and historical like Meiji shrine, shoot a smile at the red hakama-wearing miko-san working behind the counter – they’re really not so different from you.

When You Wish Upon a Star

Guide to Hatsuhinode and How to See It

Nikko: Its Legends and Lefties