The Mysteries of Aviation

Haneda Airport is often seen as a destination in itself with its newly remodeled international terminal, Edo-style village restaurants, and random indoor attractions. (Planetarium, anyone?) Yet, another gem lies just within the airport’s boundaries, which is both free and worth the journey along the Tokyo Monorail.

Operated by Japan Airlines (JAL) and led by former pilots and flight attendants, the JAL Factory Tour Sky Museum gives participants the rare chance to learn about the history and internal organization of their airline, as well as visit working hangars. Whether you yearn to live out childhood fantasies or simply admire what’s behind the scenes, the tour has much to offer. 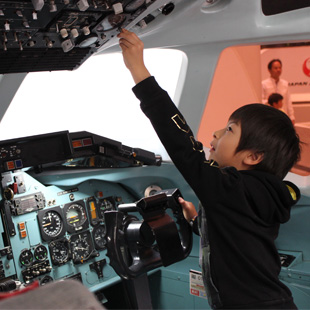 Lasting around 100 minutes and operating twice a day, the tour begins with free time in the squeaky-clean Exhibition Area before officially commencing. Covet the vintage JAL accessories, including travel posters and flight pins, or admire your favorite colorful flight attendant uniform worn by a line of mannequins. For kids—or kids at heart—sit inside a model cockpit and marvel at the 10,000 buttons and levers, or pretend you’re a marshaller and wave to park a virtual airplane. There’s also the opportunity to try on an official JAL pilot or flight attendant uniform for a great photo op.

Interactive entertainment complete, participants then watch a short video and 25-minute lecture. As the tour is kid-friendly, the presenter makes sure to carefully explain technical terms and provides a lot of surprising graphics. Did you know a Boeing 777 engine weighs as much as an elephant?!

Finally, after a short break to comb through the museum once more, participants are led to the maintenance hangars, helmets in tow. 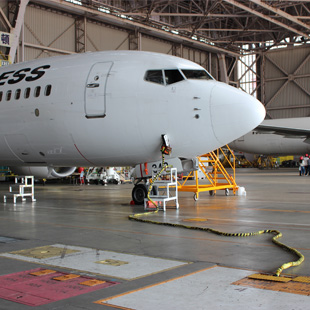 A quick march down a hallway and suddenly you emerge into an immense space shining with metal and brimming with activity. Despite the presence of a large tour group, the maintenance operations carry on normally. Engineers are busy at work, popping open the nose of an aircraft or carrying parts to a wing. The tour spends about 30 minutes on the floor, as the guide continues to deliver interesting insights. It’s difficult to pay attention when the hangar door allows prime real estate for gawking at departing planes.

Although the tour is conducted entirely in Japanese, an English tour booklet can be provided. In addition, most of the staff speak limited English. Note that as the tour is extremely popular, advanced reservation is necessary.

The Sky Museum makes for a pleasing morning, even for participants who have no particular interest in the subject matter. It may be one thing to fly on JAL, but few get to understand the orchestrated teamwork that keeps them in the air.