The Sound of Speed

We’re in Nakano — a patchwork quilt of disparate subcultural influences and paraphernalia, from animation and collectible character figures to sleazy, underground music venues and cosplay. It’s a hot Sunday afternoon and just out front of Nakano Ward Office a group of kids and parents are skateboarding in an enclosed space (in a once a month arrangement with local officials). The jarring sound of skating permeates the whole area and older locals look on disapprovingly from the street outside this makeshift skatepark.

Parents with dreadlocks, tattoos and skatewear sit quietly chatting while sipping beers and soft drinks, others have a picnic, while kids — as young as two years old — skate without care over ramps and half pipes. Looking on, and intermittently coaching these youngsters, are two giants of the Japanese skate scene: Akinori Hagiwara from Fatbros and Takahiro Morita from FESN (Far East Skate Network). 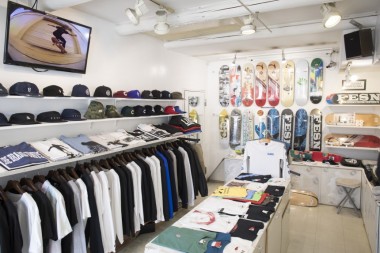 Both Hagiwara and Morita have their own skate shops in Nakano and there’s a thriving skate culture here. The two men, long time friends and skaters, have a cult following amongst domestic and international skateboarders, with fans as far flung as Europe and America who often make pilgrimages to their two stores. It becomes clear that skateboarding isn’t a sport as such — it’s a community with strong ties to other activities. “I think skateboarding is not really a sport, as such. It’s so much more, such as artwork, DVDs, music, apparel and everything else. It’s like a lifestyle and an experience,” says Hagiwara, who has run the Fatbros store for 24 years. 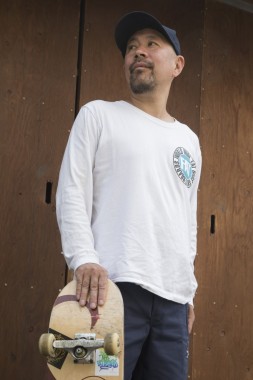 They’ve been skating for years and have experienced major shifts in the culture. Hagiwara says, “When I was younger I listened to hardcore and rock music. At that time the popular music for skaters was rock. In the ’90s and 2000s hip-hop became more prominent. Sun Plaza (a famous Nakano landmark) was a good skate spot. I used to skate there every night. And good local skaters would come there too. In those days skating wasn’t so popular compared to now. It’s becoming more and more popular maybe because of the Olympics. The Sun Plaza security, in those days, wasn’t so strict but nowadays they get angry when people skate near there.”

Tokyo-based Laurence Keefe, a pro skater for the Evisen brand and team manager for Adidas skateboarding in Japan, explains the reason for skateboarding’s uneasy history in Japan. “Skateboarding is in many ways a pretty anti-social activity. We skate on private property without permission, make noise, scratch ledges, argue with authority… Especially in a country like Japan where it’s the norm to follow the rules of society we can really stand out and get a lot of resistance. I don’t think it’s changing much yet, but when the Olympics starts and everybody’s watching, whoever is competing for Japan going for a medal on TV, they might start to have a different view of the kids they see out skating on the street.”

The brainchild of FESN went on record a few years ago, in an interview with Kingpin magazine, stating he had been “saved” by skateboarding. “You know how in school education, they always try to make you compete by comparing students?” explains Morita in an interview with Metropolis. “For an easygoing person like myself, that was pretty tough. In my student days, I couldn’t do a lot of things well and it hurt my feelings quite a lot. But skateboarding taught me that it’s okay to not compare myself to others and to just enjoy skating for what it is. I’ve been injured a lot through skateboarding, but that helped me understand the pain of others. I’ve learned simple things like helping others when they are in need of help. Do unto others as you would have them do unto you. Skateboarding is fun alone, but it’s even better if you get as many people to skate as one. The skating videos I’ve made are a testament to this.” 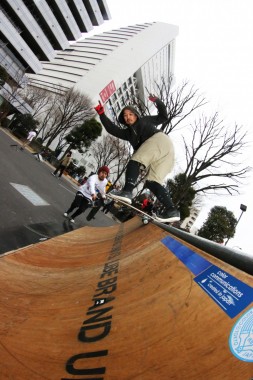 It can be a dangerous sport with skaters accumulating a ridiculous array of injuries and permanent scars. This, however, never seems to be much of a deterrent as skaters routinely take to the Tokyo streets at night (to avoid security and police) to speed through stations and streets doing tricks against rails, stairways, public art and architecture. Skateboarding, on some levels, can be seen as a synergy with the physical environment — something it shares with Parkour — another “subversive” sporting activity. Keefe explains the highs and lows of skating in Tokyo. “It’s a fun place to skate. The skate scene is really active and there’s a lot of really interesting architecture here. Tokyo night footage always looks amazing as well. Some of the downsides are the lack of places you can skate without getting kicked out, the police, security, and general hate from passersby.”

To avoid such continuing struggles with authorities, Hagiwara is in talks with Nakano ward officials regarding the possibility of a new Nakano skatepark. Tokyo is unfortunately bereft of such parks with only a few dotted around in places such as Mitaka and Odaiba. Nakano, naturally, would be a perfect spot for a skatepark as it’s seen as the spiritual hub of skateboarding. “Nakano has a street style,” says Hagiwara. “It’s real with normal people. It’s a good place with good people and community. I’d ultimately like to have a public skatepark in Nakano. I hope in three years or so that we can get a park. We’re in negotiations with the local government about this so hopefully we’ll find out soon. I also have the Nakano Skateboarding Association. Me, Morita and local skaters.”

Morita shares Hagiwara’s enthusiasm for a skatepark. He has, however, a more metaphysical explanation: “Skatepark? Of course I want one! I really want one, but before that we skaters need to establish a firm footing in Japan. If we skaters can be recognized as good guys, then skateparks will come naturally. The reason why there are so few skateparks in Tokyo is just because there aren’t many rich guys in the community and we aren’t respected by society. 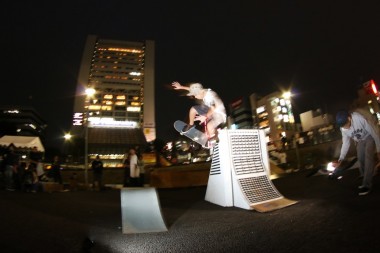 That’s why we try hard to get people to realize ‘skating is great, and we need skating to make the world a better place’ by opening skateboarding schools and coaching local kids for free. We skaters enjoy everything we do. We’re never pessimistic. The world is filled with joy, and skating brings even more joy. To everyone who’s reading this, I hope you give the easy and convenient sideways-facing ride a shot. You should sometimes let go of all the deadweight you’ve accumulated in your life and be free. In this sport, status and pride are mere nuisances. Let your spirit ride freely.”

Morita, then, embodies Czech novelist Milan Kundera’s belief that, “The degree of slowness is directionally proportional to the intensity of memory. The degree of speed is directionally proportional to the intensity of forgetting.” Forget the troubles of youth and middle age, the baggage, paranoia and debris which attaches itself to life. Skate like you’ve never skated before as you push yourself through the streets of Tokyo, sirens wailing, lights blurring, crowds dissipating as you go faster and faster.