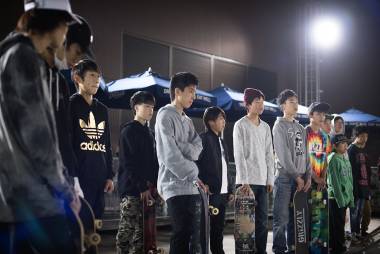 One night in November, a group of teenage skaters gathered at H.L.N.A, a rooftop skatepark in Odaiba. Some congregated in small groups and chatted, boards under their arms, while the rest glided freely, trying tricks on different obstacles. They jumped down gaps and grinded ledges and carved lines through the park.The air was cool, and the clear night lent the skaters an unobstructed view of Rainbow Bridge and the Tokyo skyline beyond.

In other words it was a familiar scene, one that can be observed anywhere in the world where there are skaters—ordinary skateboarders doing what they do at an ordinary skatepark. But these skaters were a little different. They were gathered there not just to practice tricks and to enjoy each other’s company, but for school. The skaters at H.L.N.A. that November night were the student body of a new school in town. They, along with their parents and teachers, were on that rooftop in Odaiba to celebrate the inauguration of that school: a high school for skateboarding.

When it opens for class this April, Vantan Skateboard & Design will become Japan’s first-ever high school with a curriculum centered on skateboarding. If skateboarding and schooling seem at odds with each other, that’s because it usually is, at least to Nobuhiro Hosoi, the director of the program. According to Hosoi, teenagers who pursue skateboarding at a serious level often do so at the expense of their schooling. They commit more of their time at skateparks than in classrooms, chasing the elusive dream of becoming professional skateboarders.

“The kids who really skate, who want to be pros, they tend to spend all of their time skateboarding and often drop out of school,” said Hosoi. “A lot of pros don’t have high school degrees.” 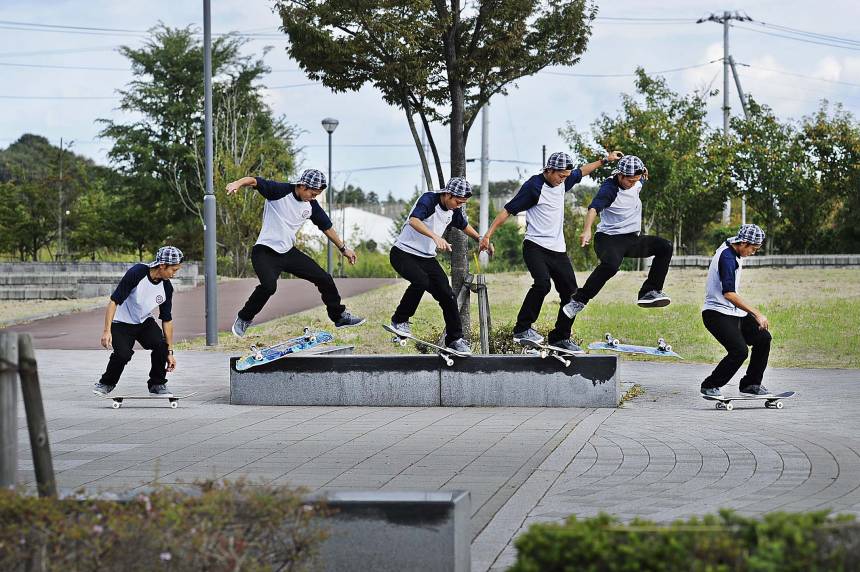 The program aims to attract such students who are serious about improving their skateboarding. Hosoi hopes to help these skaters realize their dreams by providing them with the necessary training as well as equipping them with other skills and a high school diploma.

The Skateboard & Design program is part of Vantan Institute, an educational institution that started as a fashion and design school in 1965. The school has since expanded to include a wide range of courses, covering many disciplines from animation to video game programming to culinary arts.

Courses for high school students at Vantan Institute started in 2010 with the introduction of a culinary school and a beauty school. As with Skateboard & Design, these programs are more like a trade school than high schools. The programs have a technical focus rather than an academic one, and students earn their high school diplomas through correspondence.

But the program takes advantage of the design school heritage of Vantan Institute by training the students in relevant disciplines. Along with skateboarding training, students learn video production, fashion design and graphic design—providing a flexible skill base for those wishing to enter the skateboarding industry.

“The idea here is to produce graduates looking to get into the skateboarding industry,” said Hosoi, “whether they become part of the industry as skaters or as creatives getting involved with skate brands as filmers and designers.”

The faculty embodies this intersection between skateboarding and the creative fields. The teachers selected to head the school are individuals who excel in both skateboarding and the arts, including professional skateboarders Hiroki Muraoka, a painter, and Shinichi Ito, who runs his own brand called SLD Skateboards.

At least for some of the more skeptical parents who were at the inauguration event on that rooftop in Odaiba, this multidisciplinary aspect offers them peace of mind for an otherwise unconventional approach to education. For Sayako Saito, whose fifteen-year-old son Hayato will move from Aomori Prefecture to attend the school, her initial apprehension was offset by the program’s focus on other skills. 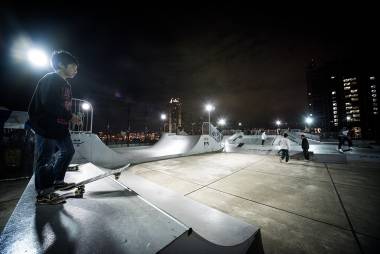 “Becoming a professional skateboarder isn’t guaranteed,” said Sayako, “and I wasn’t initially sold on the idea, but knowing he will have the opportunity to learn other transferable skills helped me agree.”

Other parents, however, seemed to not need any convincing at all. Takuya Abe, who himself was a skater when he was young, supported his nephew Toru’s decision from the beginning. “To be honest, I wish this school existed when I was a kid,” said Takuya. “I would have gone for sure.”

Hosoi believes that the timing for a school like Skateboard & Design is ripe precisely because of parents like Takuya, who were also once skaters themselves. “These people, who long ago grew up skateboarding, have become adults now with children of their own,” said Hosoi. “While it may not have been possible for such a school to exist when they were kids, these parents are helping the sport grow by encouraging their kids to skate. The industry and the skate scene is big enough now, that there is demand for a school like Skateboard & Design.”

And perhaps this is true. As the old skaters have grown up, skateboarding itself—the tricks, the industry—has advanced as well. It has come a long way since the days the wooden toy was used by surfers to imitate surfing when the waves were flat, and the industry has grown such that skateboarding has become a legitimate career option.

By some estimates, the skateboarding industry is now worth $US5 billion. Top professionals earn lucrative sums through sponsorship deals with big sports companies like Nike, and skate brands are deeply embedded in youth culture. It captivates a younger demographic more than certain traditional sports, and this appeal played a role in skateboarding becoming an official Olympic sport.

Maybe we’ll see a Skateboard & Design graduate or two at the Tokyo Olympic Games in 2020.