The fatal shooting of Michael Brown, an unarmed black teenager accused of burglary, by white police officer Darren Wilson in Ferguson, Missouri, this August continues to spark global outrage. Furthermore, the grand jury’s decision in November not to persecute Wilson was met with nationwide protests that brought to the forefront the issue of police brutality and violence against black people in the United States. 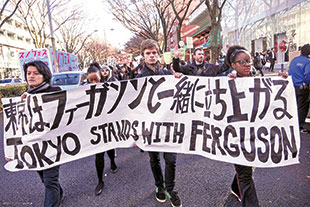 On December 6, Tokyo-based African American Youth Travel Program (AAYTP), a non-profit organization providing underprivileged African American youth new experiences and opportunities through travel, responded to the verdict by organizing a peaceful demonstration, with the support of the Tokyo community. Participants rallied to show support for the Ferguson protests and raise awareness for prejudice faced by black people stateside at the hands of law enforcement.

“I was absolutely devastated by the verdict of the past trials of children being murdered and culprits being let free,” says Amber Richardson, president of AAYTP.

“In times like this, when you are far away from home, you can feel so helpless. We all wanted to make a contribution to send support to all allies, ending police brutality and demanding an end to racial discrimination that exists in our policing system.”

Carrying bilingual signs that read “Don’t shoot!,” “Black lives matter” and “I can’t breathe”—referring to Eric Garner, who was choked to death by a police officer in New York this July—while wearing black, over 100 protesters of various nationalities, as well as cultural and ethnic backgrounds, marched from Yoyogi Park and through the Shibuya and Omotesando areas. Aisha, one of the organizers, opened the march with a rendition of “Amazing Grace” while fellow AAYTP member Ebony Bowens worked with Tokyo police to ensure everything proceeded smoothly.

Richardson explains that the demonstration helped open eyes to existing racial inequality in a country regarded internationally as a melting pot. 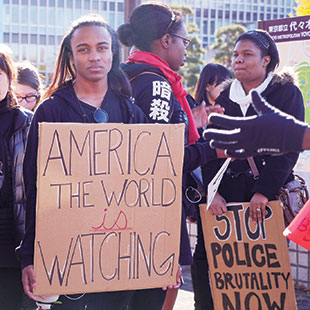 “The initial incidents themselves did not gain much attention in Japanese media,
and also the fact that the history of discrimination is something that is not necessarily talked about in Japan,” she states, explaining that Japanese coverage of Ferguson was minimal until the verdict of Wilson’s non-indictment. “Most people who are unaware of the cultural differences are shocked that we still suffer discrimination in the USA.”

For some of the participants, racial prejudice is something that has been witnessed and experienced first-hand.

“Having grown up in St. Louis and for a short while attending school in Ferguson, I experienced just how racially segregated the community there is,” says AAYTP member Niaya Harper, adding that the issue is not unique to the city. “The sad thing is that it is not isolated to just Ferguson, but this is a problem that people can witness all across the USA.”

However, Harper expresses appreciation for the amount of support coming from the community in Japan.

“I am grateful for all the people around the world who are bringing to light the injustice that we as African Americans face on a daily basis. It is also very admiring to know that, in Japan, people can openly feel and understand these issues—and want to also help to make a change.”

For fellow AAYTP member Dayo Adeshakin, prejudice persists on a larger scale than in the mere confinements of cities and communities: “Discrimination is something that cannot be contained to a certain region of the world. We are here today to show that we want an end to all forms of discrimination and the full recognition of our human rights.”

Richardson states that it’s possible to help bring change in the U.S. from abroad—through education.

“It starts in using your voice to let people know it’s not OK. Keep talking about issues related to race so people are aware and provide educational outlets to teach people about how to better communicate and engage in a racially diverse society.

“This is one thing the AAYTP has in its mission: To not only educate African American youth on cultures outside the USA, but to also provide a chance for people in Japan to learn about African American culture.”