Garlic has been used throughout history as a way to ward off undesirable visitors. From Korean tigers to Balkan vampires, a wide variety of foes are said to avoid this small but mighty member of the onion family at all costs. But for five days in July, Shinjuku’s Okubo Park Theatre Park hosts a festival that wants to flip the script on the veggie infamously known as “the stinking rose.”

The aptly-named Tokyo Garlic Festival has a solitary focus and an admirable mandate. According to their website, festival organizers were frustrated with the high cost of food and drink at similar events and so sought to establish one low price for all the garlicky goodness they’ve made available. After all, what’s the point of a pop-up marketplace if patrons can only try one or two things? The festival’s solution: a measly ¥500 coin that will let you order anything available within the festival’s garlicky gates. 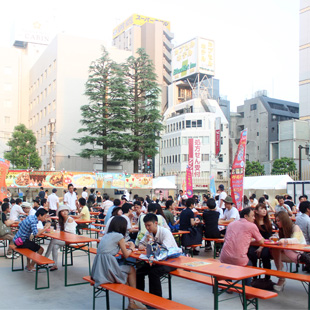 It’s a great idea. But it’s also the festival’s weak point, as while everything’s the same price, it doesn’t hold the same value. A tasty cocktail for ¥500? Not bad! A bag of popcorn or single chicken leg? Not good! Prix-fixe pricing is a great idea that should be carried forward in future installments, but the festival would do well to make sure that they can deliver on their initial dream of good-deal grub.

Some stalls are right on target, though. The “European-style” curry has a nice hint of garlic, and is served up with papadum-type tortillas for sopping up stew, and a pair of garlic shrimp tacos just might be the best bargain on site.

Each vendor’s garlic quotient is also rated on a scale of one to three. This comes in handy if you like the stuff but don’t want to go wild. Or if you’re angling for a little romance later. Because, let’s face it: even if you love garlic, nobody loves garlic breath. 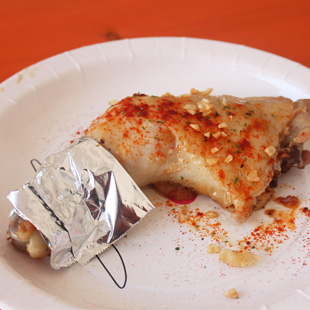 But fear not, as the festival comes equipped with its very own dedicated “breathalyzer test” tent. Patrons huff into a plastic tube that assigns their stinky fumes a score, and awards them accordingly. Prizes include packs of mints from event sponsor Lotte or, for especially vile offenders, mouth-covering masks.

It’s too bad that more clever ideas like these don’t make their way to the menu. Food festivals have a tradition of getting freaky with their fare, and these little experiments are a treasured part of the fun. Spicy meets sweet, savory meets sour, and foods voted “least likely to get along” in their high school yearbooks find themselves inexplicably mixed up in the same unforgettable sandwich.

But at the end of the day, what’s available at the Tokyo Garlic Festival is surprisingly conservative. A lot of the dishes would normally contain garlic to begin with, and don’t seem much different for their everyday incarnations. With a focus as deliciously pungent as garlic, it feels like a missed opportunity. 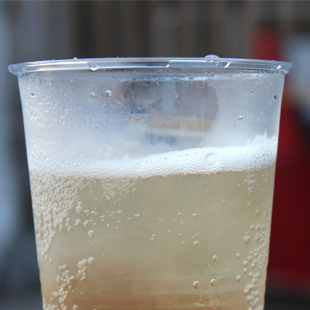 The main exception is a very promising bar menu of garlic beer and highballs, with a thoughtful non-alcoholic cocktail variation on tap for those who don’t want to get boozy. Sadly, the featured ingredient was barely detectable in the highball, which made for a refreshing beverage but didn’t come anywhere close to what you’d expect from such an odd concoction.

Due to popular demand, the event is already scheduled to return in 2017. With a few tweaks, the Tokyo Garlic Festival could easily correct its missteps in value and variety and become a can’t-miss event. Who knows, maybe even a few vampires might risk a visit.

For more information on the Tokyo Garlic Festival, visit http://ninniku-fest.com