“Basically, ‘Tokyo Junkie’ is a love story, starting with the giant construction site that was Tokyo in 1962,” explains Robert Whiting. A Tokyo-based journalist and author of the memoir “Tokyo Junkie,” Whiting originally grew up in a small logging and fishing town in Northern California, where his knowledge of Japan extended as far as badly-dubbed Godzilla films shown at his local movie theater. Coming to Tokyo as a young adult, “Tokyo Junkie” is a coming-of-age novel for both the city and Whiting himself. As we follow the evolution of Tokyo from its gritty underbelly in 1964 to the hulking megalopolis it is today, we also watch Whiting grow from what he deemed as an “immature brat” into a responsible adult and successful author.

To be published on April 20, 2021 by Stone Bridge Press, “Tokyo Junkie” spans more than 60 years of Whiting’s time in Japan. Part “Alice in Wonderland,” part Bright Lights, Big City and Forrest Gump, Whiting recounts his first hand experiences of major shifts in Tokyo, from being a part-time student activist and then maturing into adulthood and the rapidly evolving workforce. Both teen and adult readers alike can relate to Whiting’s story, as we all know the power a young generation can hold to change the world. 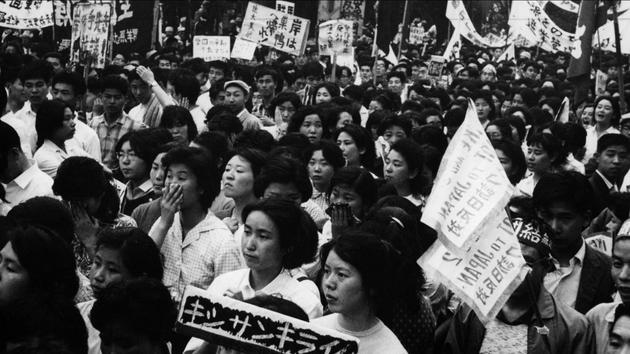 “Protest was in the air.”

Growing up in the 60s, Whiting lived through an era that saw student uprisings around the world, including the civil rights and anti-war in the U.S. and the cultural revolution in China. In Japan, there were huge demonstrations opposing the presence of the American military, the Vietnam war, the conservative Japanese government and the archaic university system. Whiting’s memoir explains that today’s Japanese youth are not as politically active as they were back then.

“Japanese people have more respect for authority than Americans as they face social acceptability and intense pressure to not bring shame on their family,” Whiting explains. “So change comes more slowly than elsewhere.”

2021: What is the Future of Japanese Literature?

While social activism may be less of a burning issue in the hearts of Japanese youth in 2021, the creation of social media and subsequent overflow of digital information means that protests are now more easily organized with vast crowds of activists joining in — both online and offline.

Back in the 60s though, Whiting was juggling his time in Tokyo between student activism, part-time work and his studies at Sophia University. He goes on to explore the shift that happened in Tokyo after he graduated.

“That is the thing with growing up; people change when they age,” he explains. “People get too busy making a living, building a career and just surviving, especially when kids come along, to think about social justice. People, as much as they are capable, have to take care of themselves. Of course, society has to take care of those who can’t fend for themselves. But that is easier said than done.

“It’s the energy of the place. It just sucks you in.”

“Tokyo is a lot richer now than it was then,” he continues. “The city underwent a remarkable transformation to get ready for the 1964 [Olympic] Games. But what ceased to change was the kindness and selflessness of the Japanese people. Lose ¥100,000 on the Yokosuka Line and it is guaranteed that it will be returned back to you with a kind note from the returnee. Tokyo still remains one of the safest and the cleanest major cities in the world.”

After growing up alongside the city over the decades, what advice does Whiting have for the youth of today?

”Be an expert at what you’re good at and contribute to the world with it, make it your life goal — or at least one of them. It will undoubtedly make you feel good about yourself.”

“Tokyo Junkie” is a dip back in time to a grittier, more volatile Tokyo of the past, but it is also a message to readers in the present to have patience despite the difficulties that life throws at us, wherever in the world that may be. Whiting ends the interview with a quote from Aristotle and Musashi Miyamoto:

“‘Perseverance in a worthwhile goal is the key to a happy healthy life’ and ‘there is more than one way to the mountaintop.’”

You can purchase “Tokyo Junkie” on Amazon
Find out more about Robert Whiting’s work on Metropolis here, or visit his website