Photography in war-torn Afghanistan, workshops in the aftermath of the 2011 Tohoku earthquake and community art in a remote village of Hokkaido seem a far cry from the paintings of big-headed children we usually associate with Yoshitomo Nara. These rebel kids on canvases rocketed Nara to international acclaim in 2001, solidifying him as one of the most important Japanese artists working in the contemporary world. But Nara’s work is astonishingly more diverse and complex than the big-eyed figures who have come to define him.

Yeewan Koon is the associate professor and chair of the Fine Arts Department at the University of Hong Kong. She’s also the author of “Yoshitomo Nara,” a crucial book that traces the artist’s vast career so far and the factors that influenced his highly multidisciplinary oeuvre.

Published in March this year, the book makes it apparent that both Nara and his practice have never been static. When Takashi Murakami coined the term “Superflat” in 2001, many critics began placing Nara at the center of this colorful, manga-inspired movement. Although it’s easy to see how Nara’s simple lines and big-eyed girls could fit here, he never felt his work fully conformed. 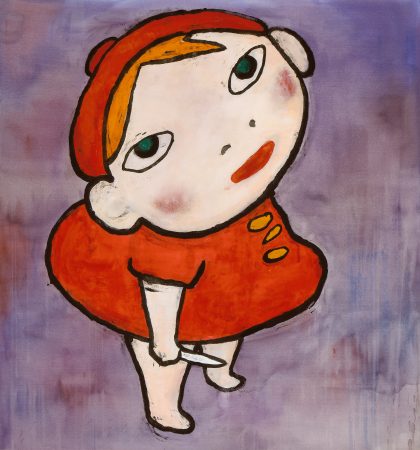 “The Girl with the Knife in Her Hand,” 1991 | Yoshitomo Nara by Yeewan Koon is published by Phaidon (phaidon.com)

While Superflat was primarily concerned with the hyper-consumption of culture in postmodern Japan, often using mainstream, fictional characters, Nara’s art has always been entangled with the deeply personal, spiritual and emotional. His girls are not products of a consumerist machine, but take on their own identities and emotions.

“It is as if I’m confirming my own sense self — as if I am speaking to myself [and sometimes I am] as I paint the face… but at some point it starts to develop its own personality, like something I can’t control,” Nara says in an interview with Neppu Magazine.

The subjects’ kawaii innocence falters when we notice darker cues like knives in their hands or complex emotions in their eyes that should belong to the adult world: anger, threat, defiance. We do not see a “flat” image, but a being whose emotions resonate with us on an empathetic, personal level because, as fellow humans, we’ve all experienced those feelings too.

I gave an art lecture for the students who are interested in art and after that, they showed me their drawings. I believe art as a language of communication and like it. #zaatari

Although the big-headed girls would never leave him, Nara started to grapple with the art world’s perceptions of him and forged into new artistic territories. He began to erase his girls of the past by painting over the canvas and starting anew. His figures evolved from knife-wielding youngsters to older, quieter teenagers and he reimagined them into installations, architecture, billboards, clay sculptures, ceramics and more. He pulled his personal life to the forefront when he recreated his own studio with the Osaka-based design firm graf, and he worked his characters into his passion for punk music by designing cover art for bands like Shonen Knife, R.E.M. and Bloodthirsty.

However, as Koon explores, some of the biggest shifts in his art emerged after the most impactful events to shake Nara’s life. After a trip to Afghanistan in 2002, Nara found himself unable to paint. FOIL magazine had commissioned him to take part in its No War issue, but, as Koon writes, “[h]e found it hard to process his conflicting emotions after witnessing, close up, the after effects of war.”

I found I couldn’t make pictures on a blank canvas, but I found I could confront a mass of clay. I wouldn’t think about it with my mind. I would just attack it, like a sumo, with my body. — Nara in an interview with The Japan Times

Instead of paintings, Nara submitted photographs that captured the daily lives of the communities living with war. “The big-headed girls and cheeky rebels are visible here only as glimpses,” Koon writes. Just as his signature figures stare at the viewer from the canvas, “his photographs show an artist who empowers his subjects. He allows them — he wants them — to look back.” However, Koon explains that what is most prominently highlighted in these photos is how Nara “showed the genuine warmth of a place that, despite its history, persevered,” and how these people connected to their landscapes and maintained a feeling of home.

After the 2011 Tohoku earthquake and tsunami, Nara once again found that he couldn’t translate his emotions onto the canvas. According to Koon, “this time, the pain and confusion underlying his ennui were more personal, since the disaster had affected his hometown of Hirosaki.”

Yearning to help, not through the art world, but via more meaningful engagement directly with the affected communities, Nara hosted various workshops across Iwate Prefecture. He also made costumes with children staying in temporary shelter, bringing them a moment of joy in the chaos surrounding them, and spoke with communities about their experiences. 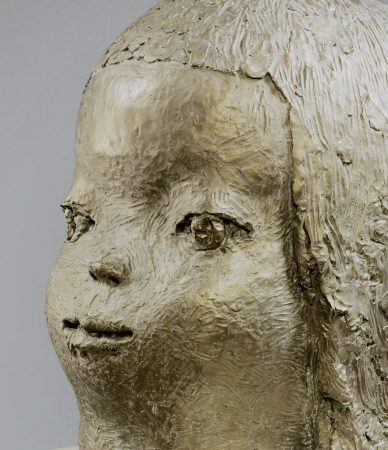 After returning from this trip to the north, he recalls in an interview with The Japan Times that, “I found I couldn’t make pictures on a blank canvas, but I found I could confront a mass of clay. I wouldn’t think about it with my mind. I would just attack it, like a sumo, with my body.” This process resulted in the girl’s head titled “Wicked Looking” (2012). Koon explains that “only then did he feel he was making art that had something to say […] When the final form emerged, he cast the malleable medium into cupronickel, its permanence bringing stability to a world that no longer felt as enduring as it once was.”

Nara’s experience of the Tohoku disaster and his travels abroad have been bringing him increasingly closer to his northern roots, and the communities that live there, ever since. One project that continues to this day is in the small, remote village of Tobiu in Hokkaido. First drawn there in 2016, Naru was enchanted by the sense of community, the village’s relationship with the surrounding nature and the rich history of myths and traditions tracing back to the indigenous Ainu people.

For those who want to delve deeper into the art of Nara, Koon’s book really is the most definitive guide currently available. It is available via Phaidon as well as Amazon.