Magic lives on in the world of children’s theater. Compared to digital entertainment, live theater is unique in that it grants young viewers the chance to be whisked away into a vibrant world of colorful characters and larger-than-life stories, instilling inspiration and a sense of fun.

That’s the motto behind Tokyo Theatre for Children. Since their start in 1974, the non-profit theater group has put on annual English-language productions in Tokyo that encourage creativity and imagination.

“We are a company that creates shows for children,” affirms Kimie Mizuno, a drama teacher and director currently working on TTFC’s fall 2015 production. “The whole mentality is, this is going to be for children, and we’re making it for the children.” 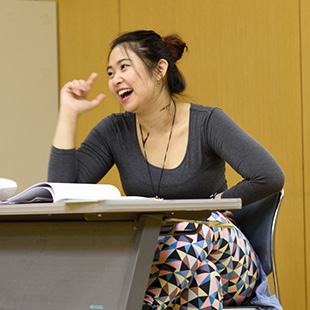 Beyond producing these shows, Mizuno strives to rebrand “children’s theater” as something both beneficial and entertaining to audiences of every age, providing theatergoers a fantastical visual and mental stimulation rarely seen in most other genres.

“I love children’s theater—maybe because I’m a kid myself,” she laughs. “I think children’s theater is just so beautiful visually, and there’s no boundaries. It’s not dumbed down—it’s the opposite: I think it’s very intelligent.

“You’re supposed to keep a kid interested for an hour and a half. You need to make something of good quality to keep children’s attention. So why not have it be interesting for adults?”

As such, the theater group has garnered a loyal following that includes international families as well as Japanese children and parents who are learning English. This is largely due to their unique musicals that put creative, Japan-relevant spins on popular favorites: the 2014 fall production of English folk tale Dick Whittington transported the action to Tokyo, while the 2013 production of The Nutcracker found the toys and dolls battling ninja rats.

Theater also has plenty of benefits for the kids onstage, who get to play and be creative, while working together with adults and fellow children to put on a show for their community. 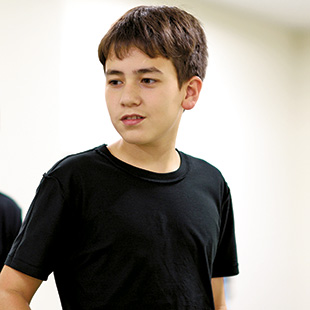 Jun Ito, who plays Mowgli in The Jungle Book
(Photo by Teruaki Ito)

“The performing arts are important for children because they teach children to be open with their ideas. You can create worlds for them, and it’s in your face; it’s so real and they can experience all this,” says Mizuno. “Theater is very visceral, so they can see things, they can feel things, they can smell things, and I think that’s really important in a kid’s upbringing.

“It really challenges [them] to push boundaries, really believe in themselves, create something new, make connections with people … they learn how to work with people. I think there’s just so much you could gain from being involved with theater.”

Currently, Mizuno is working on directing TTFC’s upcoming production of The Jungle Book, a musical by Mike Carter based on Rudyard Kipling’s novel about Mowgli, a young boy who’s raised in the jungle and learns about life from his friend, Baloo the bear. The story finds Mowgli questioning whether he belongs in the jungle with the animals, or back in the village with other people.

While the fun, wild jungle setting added to Mizuno’s decision to direct the musical, she professes that she has a profound connection with the story—namely Mowgli and his search for belonging.

“That’s something I’ve experienced myself, being Japanese but brought up in Australia. When I’m in Australia, I’m ‘Asian’ or Japanese … but then when I’m here, I’m Australian. I think that’s something many people can relate to, especially in Tokyo, with the multiple cultures that are in the city.”

The director hopes that audiences leave the theater with a sense of community.

“I hope that people can leave feeling like they’re not alone, and that people are there to help you. There are always friends and family who want to be there for you—they’ve got you, and you’ve got them.”

Truth in Theatre: An Interview with Sheepdog Theatre

Powerful performances on the Tokyo frontier