Urban Art in the Nation of Tradition

Outsiders within the world of art

A Banksy imposter recently brought art experts and world media alike to the streets of Tokyo, all desperate to validate the work and be the first to say Banksy had graced the Japanese capital. Though it turned out not to be the case, the phenomenon did lead to an interesting result. A large number of locals were incredibly eager about the prospect of living amongst the work of Banksy. The enthusiasm might have struck you as out of place, with Tokyo’s cityscape being as paint-free as it is. Evidently, this was a case of exceptionalism.

Metropolis was invited to attend the opening of French urban artist Oré’s exhibition, “Rocking the City,” which runs until February 17. Oré has had a different reception to that of Banksy — in fact, he contacted dozens of galleries but found that few had interest in urban art. Fortunately, he found a space — Jinkinoko Gallery, owned by Jin Funato, in Daikanyama. Funato believes this may in fact be the sole gallery in this city that is entirely dedicated to urban art. Metropolis sat down with both men to discuss the current environment of Tokyo’s art scene, the obstacles in the way of urban artists in Japan and the potential of urban art growing in the mad city. 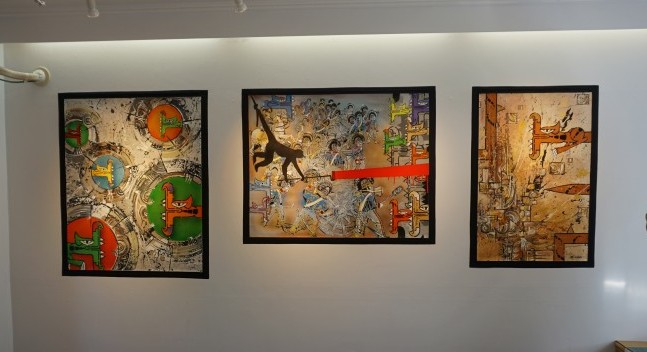 Metropolis: Why did you open this gallery?

Jin Funato: I used to work in the construction industry and there was a company-owned house in Shin-Koiwa. One day a street artist visited me, saying he wants to paint graffiti on it. I said yes and then he stayed in the house for four days and made a 12-meter long work on the wall. Since then, that house has become a popular place among street artists, I’ve had a lot who wanted to leave their mark on the house. Overall, more than 20 artists came to it. They all stayed in the house rather than stay in famous tourist spots in Tokyo. I started taking the artists to galleries, showing them the urban art. None seemed interested in the art. I’d come to know these artists so well and wanted to do something for them — so I quit my job and started this gallery myself. 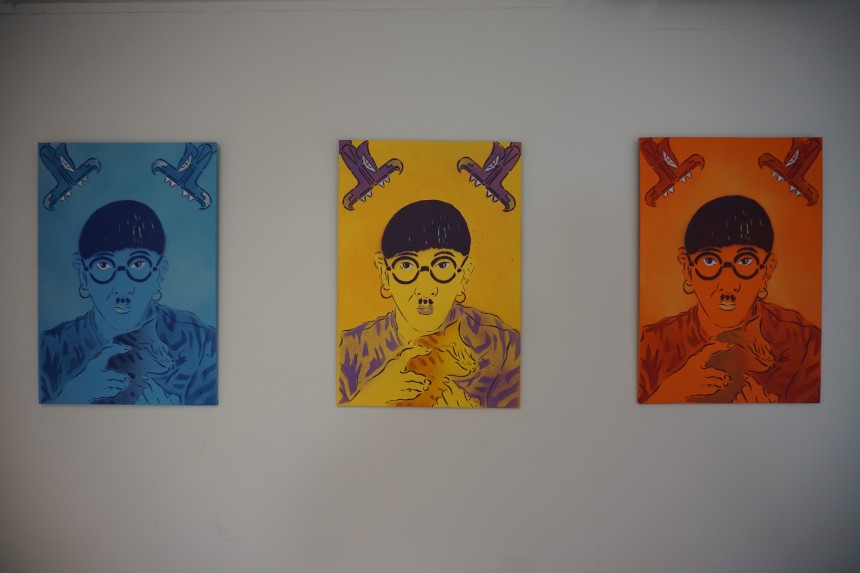 M: Where do you see urban art in the Japanese art scene?

JF: In Japan, spray painting isn’t really considered to be art. If world-famous artists came to Japan and left their murals on the walls, someone would probably get rid of it within a few days. Street art is not yet seen as a proper form of art.

M: Is painting on walls legal in Japan?

JF: Yes, but the property owner’s permission is needed. Basically street artists travel around the world while they paint. When they find a place where they want to paint, they ask whoever owns that place for permission. Once they gain approval, they begin working in the space. The thing is, not everyone [in Japan] speaks English well, and owners and landlords are not necessarily the same people. It usually is such a long process to get permission to make paintings, here. Street artists usually intend for their work to remain a long time, so they don’t do sneaky, spontaneous painting while the town sleeps during the night. That is what might be considered a scribble.

M: Is the Japanese art community open to street art?

JF: Urban art is not mainstream yet in Japan. Although there’s now a huge market in other countries — beginning even more than a decade ago —  it is still niche here. But I feel now is the right time to do a street art gallery in Tokyo. The more I host exhibitions, the more people come to visit us. I’m hopeful that people will be more familiar with it in the next few years.

Oré: There is definitely a gap between Japan and other countries around the world… urban art, graffiti and street art are very trendy and fancy in a lot of places. Society in Europe looks to urban art as a very important art movement, but in Japan it’s totally different (of course). There’s still a very bad image in Japanese society. I think it’s because … the conservative part of Japanese society still sees this art as vandalism. 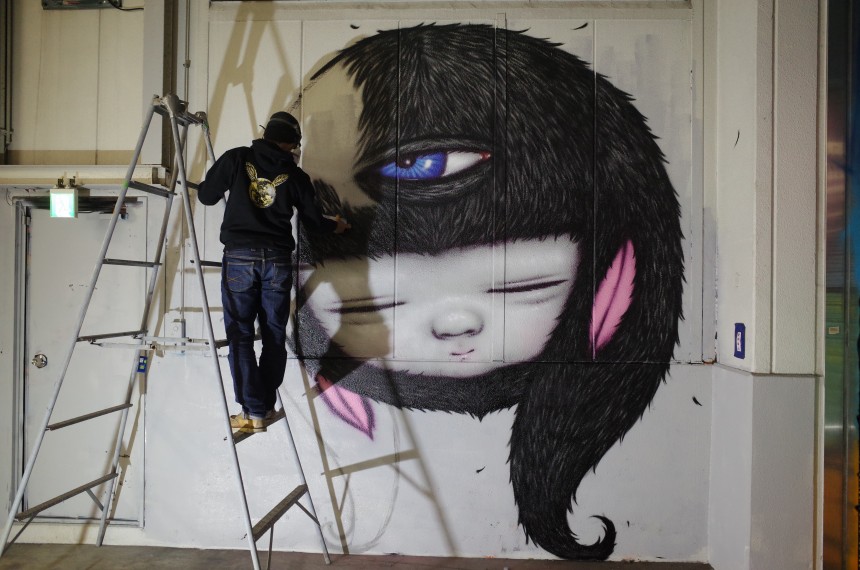 M: Some people might think the idea of a gallery is contradicting the original purpose of urban art. Do you agree?

JF: I don’t think it’s against urban art culture. Again, urban art needs to be seen by the public in this country and the role of showcasing urban art culture is definitely necessary. I personally want to own my favorite paintings and hang them on the wall of my room as part of my collection. I believe galleries are an important part of art culture and purchasing art.

O: I started, in France, to paint walls in 1989, when I was a teenager and it was the beginning of graffiti culture in France. I was among the first in France to paint graffiti … I started to work with galleries around a decade ago. For me, it’s not a conflict between gallery and street. I think it’s a balance. I think good street artists have to work in the streets, [but] there’s no problem with working in galleries at the same time. Just to balance your work and for artists, for sure — it’s very important you work with galleries.

M: How does Tokyo’s urban art community look to you?

JF: Although there are only a few renowned artists’ work in Tokyo at the moment, there are plenty anonymous pieces of work coming up everywhere. If you have a close look at these, you can find connections between these works. Someone [actually] left their friend’s name on their work instead of their actual name. You can find a lot of stories of peoples’ lives on the walls. That’s why I’m so fascinated by this culture. 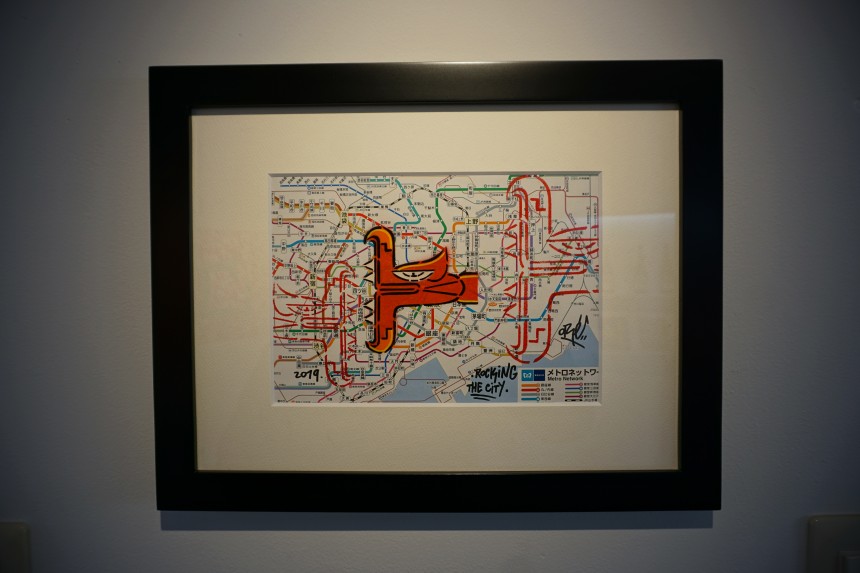 M: Why did you decide to exhibit in Japan?

M: What can urban art bring to Japan?

JF: I’m pretty sure that urban art can help revitalize dead Japanese countryside towns. It would be cool if a whole abandoned shopping arcade was painted — one big mural that draws a huge number of people. Urban art is an art of energy and vitality and I believe that has potential power that fascinates people.