One Saturday in October, members of the Adult VR No Kai group gathered on the fourth floor of an unassuming building in Akihabara. They booted up software on computers while a line formed outside the event space. The people in line were ordinary for this part of town—bespectacled, male, and either stick thin or rotund. On another day, they may have lined up outside Plum Live Shop! on the seventh floor of the same building to buy moe figurines, or on the third floor at Torano Ana to peruse the newest hentai comics. But that day, they were there to see anime characters come to life.

Adult VR No Kai—which translates to “the meeting for adult VR”—is a collective of programmers, sound engineers, manga artists, and illustrators who develop adult games for virtual reality. That Saturday, members had come together to host an event showcasing their latest software. They have hosted such events before, often out of their own pockets, and they will continue to do so, they say, out of a conviction that people need to experience VR firsthand to truly appreciate it. And since they’re not welcome at mainstream VR conventions, they have taken it upon themselves to seek out an audience. 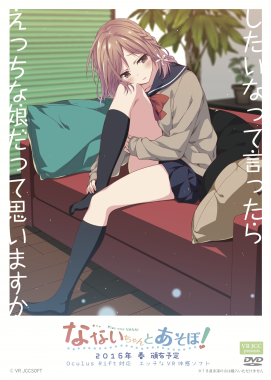 Virtual reality technology has been around for decades, but it has only become affordable for consumers in recent years. The release of VR hardware such as the Oculus Rift, HTC Vive, and PlayStation VR have provided consumers with an inexpensive entry point into virtual reality. And of all the different industries exploring VR, from music to film to pornography, the gaming industry is its public face. This year’s Tokyo Game Show was heavy on VR software, and it is a sign that VR will revolutionize the future of gaming.

Adult games, however, are being left behind. Adult content is often banned outright at mainstream gaming conventions in Japan, and creators of such content lack avenues to bring their games to a wider audience. But if the actions of some of the gamers at this year’s Tokyo Game Show are anything to go by—a booth was shut down due to people groping a mannequin that became an anime character when seen through VR headsets—there is an audience that is at least curious about seeking out such content. 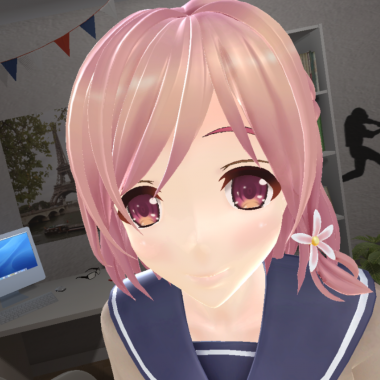 The collective successfully ran the festival later in August, and have since traveled around the country hosting similar events, most recently in Sapporo. And at these events, as was the case with that one Saturday in October, people’s attention invariably turns to one game in particular: Let’s Play with Nanai!

The game is simple. It’s played by wearing a VR headset, which transports the player to a bedroom. Once there, the player is greeted by Nanai, a slender, pink-haired anime character. But instead of using controllers like most VR games, Let’s Play with Nanai! blends physical reality with virtual reality by using surrogate bodies. A smartphone is attached to a surrogate body that controls Nanai’s movements, allowing the player to have seamless interactions with Nanai in VR. Information is relayed between the smartphone and the computer, and the position of the surrogate correlates with Nanai’s. Kaicho says that anything can be used as a surrogate, from sex dolls to actual human beings. “A fan of our game used his wife as a surrogate to have sex with Nanai,” said Kaicho. “He was happy, but his wife apparently wasn’t too thrilled.” 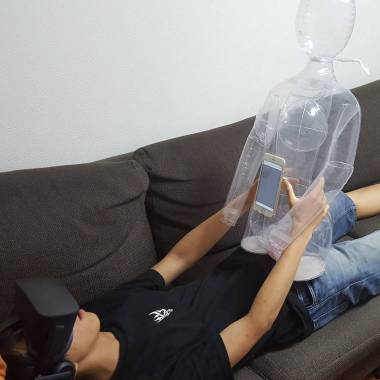 Out of all the software developed by the members of Adult VR No Kai, Let’s Play with Nanai! is possibly the most advanced. The members are primarily hobbyists and come to VR from different backgrounds—Kaicho is a respected Happy Hardcore DJ, while Roba dabbles as a VJ when he is not programming. This is perhaps why there is an undeniable DIY aesthetic to the software they develop, some of them more novel than others. Besides the fact that he uses his birth name, Haruyoshi Waseda is different from the others in that he designs adult games using augmented reality. The game he developed uses cameras on

Besides the fact that he uses his birth name, Haruyoshi Waseda is different from the others in that he designs adult games using augmented reality. The game he developed uses cameras on smartphone to superimpose women in the frame of the shot, using the same technology as Pokémon Go. When the camera is pointed at a sex doll, the phone screen displays a picture of a woman instead of what’s really there. It’s a basic, playful software and Waseda is proud of it. It was time-consuming work, in which he had to manually log the color hues of human flesh, a similar process to chroma keying for green screens. “That way,” he said, “when you grab the breasts of the doll, your hand will be overlaid on top of the image on your screen, so it will look like you’re grabbing the breast of the woman.” This is why Waseda had dyed his sex dolls green, like the Hulk. “They have that over in the US you know, Hulk-themed sex toys,” he said. “Must be the Halloween culture over there. It’s not for me, I don’t get it.” 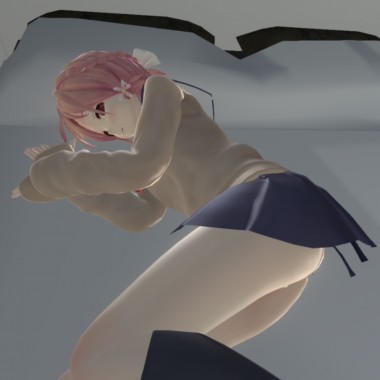 Kinks and fetishes come in all shapes and sizes, there’s no doubt about that. A person deciding to please themselves with an aid resembling The Incredible Hulk is, as far as I’m concerned, none of my business, so long as nobody is harmed or anything illegal is performed. However, as I lay in Nanai’s bed, her soft gaze catching mine, I couldn’t help feeling uncomfortable. Perhaps it was a feeling of uneasiness that came with the knowledge that out there, in the real world, on the fourth floor of an unassuming building in Akihabara, I was surrounded by Robo and Kaicho and the other members of Adult VR No Kai. Nanai moaned in my ear. As I lay in Nanai’s bed, staring up at the ceiling of her bedroom, I sensed eager eyes glued on us as other participants waited for their turn to get into Nanai’s room.

But more than anything else, what made me feel uncomfortable was the fact that I couldn’t shake the feeling that I was taking advantage of Nanai, who, dressed in a school uniform, clearly appears young. The last thing she told me before I disconnected and returned to reality was something she whispered while we shifted positions in bed. She looked back, her eyes averted, and muttered: Ushirokara dato chotto kowai—it’s a
little scary from behind.

But at least for Roba, programming adult games is about depicting the type of content people are interested in seeing. What he creates is not necessarily an indication of what he’s into but rather what his audience seeks out. His biggest challenge, and inevitably his biggest reward, comes from eliciting a very human response from the virtual realities he creates: sexually arousing gamers using lines of code. “I am just a programmer,” Roba said. “I’m not iyarashi—lewd—by nature. I have to constantly engage with people to find out what kind of things they want to see.” 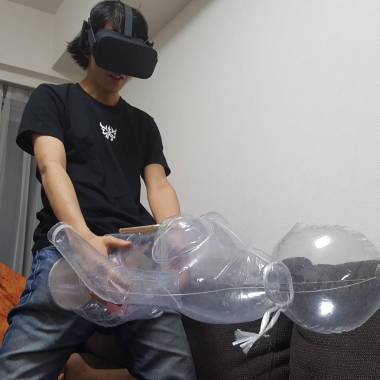 The members of Adult VR No Kai all have a joke about Roba. In the joke, Roba will be sitting at his desk, doing what he does well—programming characters in virtual reality. The year will be 20XX. Faced with a rapidly declining population, humans from the future send a cyborg assassin tasked with saving mankind. The cyborg creeps up behind Roba, pulls out a weapon and eliminates him.

“It will be like The Terminator,” said Kaicho. “The people of the future will send one to kill Roba, because he will be blamed for the fertility problem.” Other members nod their heads in agreement. Plenty of ink has been spilled on Japan’s population woes; a recent survey by the National Institute of Population and Social Security Research of people aged 18 to 34 found 70 per cent of men and 60 per cent of women unmarried—out of which 42 percent of single men and 44 percent of single women were virgins. In a country gripped by a declining fertility rate, could advances in a virtual, immersive pornography platform worsen Japan’s social issues?

Roba doesn’t think so. For him, the fertility issue won’t worsen just because of VR porn—though he wouldn’t mind that, if only he could have a hand in it.

“As a programmer,” he said, “if I can get my games to the level that it affects the [fertility] rate, I would be happy.”