A cozy bistro in Shinjuku

A charming bistro in Shinjuku Sanchome, one of Tokyo’s better-known drinking districts, a location largely populated by watering holes and chain shops? Indeed, it exists.

Wine Shokudo Kirakuni opened in September 2016, and is run by two friendly guys serving up a mish-mash of Western dishes. The orange paint on the walls of the stairwell leading to the third floor entrance hints at the warmth of the place. When I entered on a Saturday night, I heard the relaxed, happy voices of other diners. I was shown to the only available seat at the time: a place by myself at the counter. There was a group of coworkers celebrating a birthday and a couple of other smaller tables of friends. My counter-mates were a pair of girls enjoying dinner and dessert, and a quietly flirting couple. 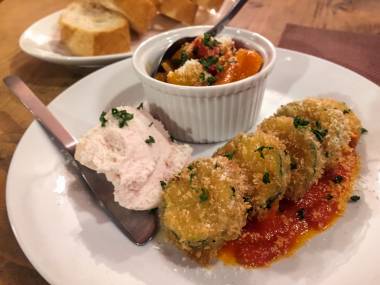 The menu has a good number of appetizers, including ratatouille (¥400), zucchini fritters (¥450), and a roast ham mousse (¥480). There is an appetizer moriawase (combination) available (¥900); any three items from the appetizer menu at slightly downsized portions. I opted for all three of the above items and a glass of Malbec from their rotating seven-bottle wine menu (¥500–700/glass).

I ordered baguette slices with my roast ham mousse, which was a fluffy, buttery spread. A note on the menu next to it reads: “if you’ve come to the restaurant, get this.”
Having tried it, I concur. The mousse paired well with the mild ratatouille. The zucchini fritters were surprisingly light for a fried dish. After my appetizers, I thought I’d go for something green: Caesar salad (¥780) .

I’d been searching each dish for some sort of flavor twist or gimmick: some “punch” or puzzling ingredient the chef had added to inject a sense of newness into what I was eating.

But I wasn’t finding anything. It was when I got to the Caesar salad that I realized what the deal was: everything I was eating was exactly as it needed to be. It was all good, simple, solid food. 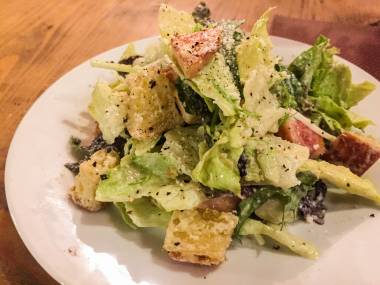 Every single bite of the salad confirmed that. The dressing was well-balanced. The croutons were homemade. When I finished the salad I entered a haze of satisfaction.

Upon the chef’s recommendation (and thoroughly bought into his food at this point), I ordered the chicken confit (¥1,100) and a second glass of red wine. Once again, I got a simple, delicious dish. I ended my night at that point, the cook kindly saying goodbye as I left.
I thanked him with a sincere “It was delicious,” as I headed out the door.

On my second trip (on a Tuesday night), the atmosphere was much more low-key than it had been on the weekend. A Bill Withers album was playing. When I entered, the chef—to my surprise—not only remembered me, he remembered where I’d sat on my previous visit, as well as what I had ordered.

First up this time was a Spanish spinach omelet (¥500) and a glass of South African Cabernet Sauvignon (¥600). Light and fluffy, the spinach flavor was strong but not overpowering, and it blended nicely with pieces of salty potato.

Next came a fresh veggie salad (¥500). Delicious! It was the highlight of this meal. The salad was served with a light yet creamy dressing (white pepper adding a tingly aftertaste, and apple cider vinegar for brightness). There was crispy lotus root mixed in with leafy greens, okra and steamed broccoli.

Lastly, I tried their hamburger in red wine sauce (¥1,180). The sauce is quite strong, so go easy; the sweet-salty flavors may overwhelm the meat. My bill for the night was an even ¥3,000 (with a cheeky ¥2 discount I spotted later).

With a menu incorporating seasonal vegetables, a rotating selection of red and white wines, and simply, thoughtfully-prepared pasta and meat dishes, this bistro is lovely. It would be fantastic for a casual date, a small get-together with close friends, or even a bite by yourself on your way home. The vibe is charming and relaxed, and this is only compounded by the friendliness of the staff. Do yourself a favor and order something with fresh veggies. Wine Shokudo Kirakuni is doing good, honest food. You’ll feel good (and maybe a little more honest) eating with them.