Somersaulting on the Edge

A solitary figure crouches next to a decorated wooden stick, the light glittering on his crystal-studded sleeve. As the music begins, Yuhei Ishikawa gracefully springs to his feet and works the expanse of the spring floor with fluid, expressive movements. His dexterous handling of the stick makes the complicated twirls and impressive aerial catches seem effortless before launching into a series of round-offs, one-handed cartwheels, and complicated somersaults, all while maintaining a hold on the stick. From his striking black-and-silver competition outfit to his innate ability to express his emotions through music, it is impossible to take your eyes away as he moves from one element to the next. 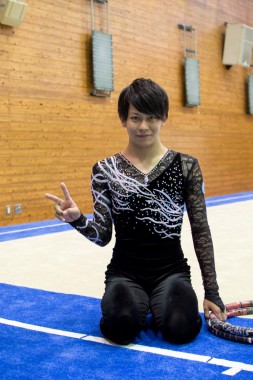 Men’s rhythmic gymnastics (MRG) is a sport born in Japan nearly 70 years ago. Although many in Japan (and increasingly abroad) are familiar with team MRG (synchronized routines by top Japanese high school and university teams have been viewed over 30 million times on YouTube and social media), it would seem that individual men’s rhythmic gymnastics is not as well known. However, the current “golden generation” of charismatic gymnasts such as Yuhei Ishikawa is introducing the beauty of this unique sport to the world.

Individual MRG uses four apparatus: clubs, stick, rope and double rings. During a competition, each individual gymnast performs four separate routines, one for each apparatus. Individual performances clock in at a brief 1:15 – 1:30, and points are based a 20-point scale. The first 10-point scale measures composition (difficulty) based on technical value, variety, harmony between music and movements, and originality, while the execution of performance is a maximum of 10 points. The individual scores of all four routines for each gymnast are then added up to decide the all-around winner.

Ishikawa’s expressive individual routines have earned him 5th place for rope at the All Japan Junior Championships in 2013, wins in the Kanto Area Competition in 2015 and 2016, three consecutive wins at the Kanto Championships as a high school student, and 5th place for stick at the All Japan Championships in 2016 (he was one of only three high school students to make the final cut). At the 2017 All Eastern Inter-College Championships, he got 4th for all-around, and 2nd for rope. In addition to choreographing his own routines, he spends a great deal of time choosing music, carefully weighing how his selections will influence the audience’s perception of him and his apparatus (Ishikawa’s favorite is the stick).

As we conduct our interview in Kokushikan’s cavernous gym, there are several simultaneous team and individual run-throughs going on around us. I’m struck by the calm Ishikawa exudes and the thought he puts into his answers. Now eighteen, he started artistic gymnastics around age seven; his mother felt his flexibility made him a good candidate for gymnastics. At twelve, he began studying men’s rhythmic gymnastics with the Kokushikan Junior RG team, graduated to the Kokushikan High School RG Team, and is currently a freshman with Kokushikan University MRG Team, which routinely places in the top three at national competitions and performs abroad.

Performing with an elite university team means a grueling practice schedule after classes and on weekends. “At times I find it difficult to stay motivated to practice,” Ishikawa admits, “But even when I don’t feel like practicing, I try to think of it as a good opportunity. My proudest moment as a gymnast is when I performed my routine without errors and was greeted with wild cheers from the audience, and when fans told me that they liked my performance.” His personal goal for this competition year is to remain among the top eight gymnasts for all four apparatus at All Japan.

Ishikawa reflects that his own strengths as an individual gymnast are his flexibility and clean movements.

“Although there are many gymnasts who are better than me,” he adds modestly, “When I am on the mat at competitions, I want the audience to look at me and enjoy watching me perform, and I think that feeling is stronger than anybody,” he said.

Even as a freshman, it is evident that he will go far. Ishikawa dreams of becoming a performer.

For youth interested in becoming MRG athletes, Ishikawa advises, “When you first watch men’s rhythmic gymnastics, you might think “Oh, it is impossible for me!” rather than “I want to do it!” However, it is not true. Everybody can. I could. So, be brave and have confidence in yourself, and start MRG!”

Ishikawa’s next competition will be 全日本インカレ (All Japan Inter-College) August 15-17 at Morioka Takaya Arena; the event is free. More information can be found at this link (Japanese only).

This interview was made possible with generous support from the following: