As I headed to The Ritz-Carlton Tokyo for our Fox Backstage Pass interview with Megan Fox and Will Arnett, stars of the hit film Teenage Mutant Ninja Turtles, my thoughts were on something else: the Super Bowl. 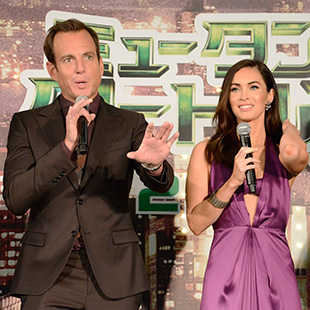 Just a few minutes earlier, I was in the midst of cheerleaders and football fans at the Tokyo American Club’s Super Bowl Party. I left late in the game with the Seattle Seahawks holding what I thought was a commanding 24-14 lead over the New England Patriots.

As I arrived at the interview room, Arnett was standing in front of the TV in disbelief. He put his hands to his head and shouted, “Are you kidding me? It happened on the goal line?”

He was reacting to the incredible ending, which saw the Patriots seal a comeback victory. There wasn’t much empathy from his beautiful co-star, Megan Fox, who ribbed him about the game.

Shifting from football to Ninja Turtles, Fox explained her decision to appear in the film. “I was a fan since I was a little kid, so it was sort of a childhood dream. I have two baby boys that will be teenage boys one day, and I wanted to plant the seed that Mom is awesome so that they never leave me! Oh, that sounds sad!”

“That’s very sad,” Arnett deadpanned. “I have two little boys who were big fans of the animated series, and I want my kids to think that I could help save the world. That’s important. I wanted to create sort of a god complex!”

The stars said the challenges of making a big-budget action film delivered an adrenaline rush. “It’s crazy making a movie like this. It’s really like run-and-gun, and there is no time to sit and take it all in or think about what is happening,” explained Fox. “It is just constant chaos.” 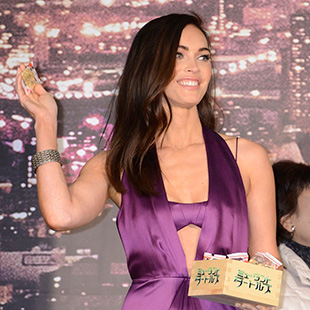 Both said they were happy with the way the film turned out. “I was surprised and really relieved,” Fox said. “It was just so much better than I could have imagined it being. It was light and really funny. I was excited.” Arnett echoed this, saying, “The film has a great message and is ultimately a lot of fun.”

But he had a little more ribbing to come from Fox, who asked her co-star how he felt being an action star. “And don’t lie,” she chided. “Was there any moment when you said, ‘I feel very epic about myself right now’?”

He flashed a broad grin and answered, “Yeah, I would like to do more action films. I’m not getting any younger—I’ll be 30 in a month … sorry, it’s the 15th anniversary of my 30th birthday.” Fox, erupting in laughter, shot back, “That aging window is closing in on you rapidly!”

Though, as it turned out, not as rapidly as the Patriots closed the window on the Seahawks for the Super Bowl victory!