Craftsmanship carried on from the Edo period

While Tokyo stands as one of the world’s most modern metropolises, it’s also home to a wealth of traditional crafts that have been passed down since the Edo period—many of which still thrive today.

Over six days in January, the Tokyo Metropolitan Government will celebrate these traditional techniques at the 58th Tokyo Traditional Crafts Fair. Starting January 21, the 11th floor exhibition hall of Shinjuku Takashimaya will be filled with the skills that have for centuries formed the foundation of Tokyo heritage, as many as 44 of them designated Traditional Crafts of Tokyo.

Visitors will not only be able to make purchases and watch skilled craftspeople ply their trades, but will even have chances to try their hand at making traditional Tokyo crafts themselves. Techniques on display will include everything from woven silk and hand-painted kimono to ornamental samurai armor and hand-forged scissors and knives. You can find hand-painted lanterns and patterned paper for Japanese sliding doors, classical wooden cabinets and woodblock prints, or even get your hands on a hand-made shamisen or koto. It’s a rare opportunity to touch a piece of living history—right in the heart of an ultramodern city. 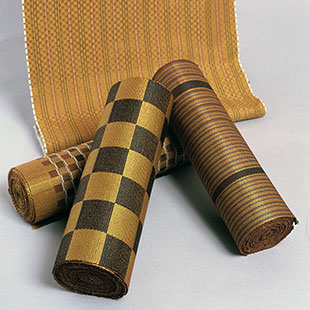 Using techniques dating back to the Muromachi period (1337-1573), the island’s natural plant dyes are used to produce threads of yellow, orange and black, which are woven together to produce the striped and checkered patterns of Kihachijo. The colors of which are said to become more vivid with time. Kihachijo fabric was widely used for everyday wear following the Bunka and Bunsei periods of 1804-1829. 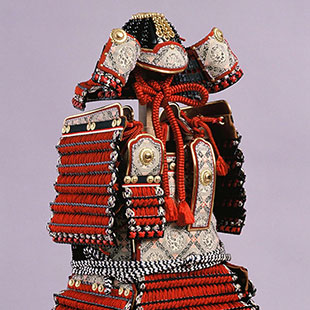 Japan’s Boys’ Day Festival has a history tracing back to the Nara period of 710-794. Around the middle of the Edo period (1603-1868), it became popular to place dolls adorned in military dress in homes on this date, with the hope that male children would grow up strong and healthy like a warrior. Over time, this tradition changed into the practice of simply displaying katchu (sets of warrior armor) in the home, and these sets of armor are still widely produced across Japan.

The shikoro, or nape-guard, begins production with the layering of sheets of washi (Japanese paper). Rows of kozane, or armored scales, are then laid over this backing. The rows of kozane, called kozaneita, are joined above and below using laces of leather, silk or cotton cord. While no longer used in daily life, armor-making remains a skill with deep cultural significance, combining the techniques of metalwork, lacquerware, leathercraft and braiding. 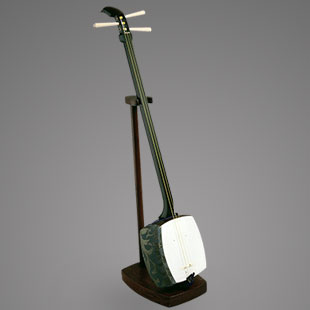 The shamisen came to Japan from China via the Ryukyu kingdom (modern-day Okinawa), arriving on the mainland toward the end of the Muromachi period (1337-1573).

The manufacture of shamisen flourished during the Edo period (1603-1868) as a range of music was developed to accompany kabuki performances and narrative stories. That music now forms the basis of the modern shamisen repertoire.

When a shamisen string is plucked, the distinctive resonance that remains is called a sawari, with the body specially designed to hold these tones. It’s artfully carved using a variety of precision processes, with the pieces affixed using only glue. Aside from the base, the entire craft of the Tokyo shamisen is carried out by a single craftsman. 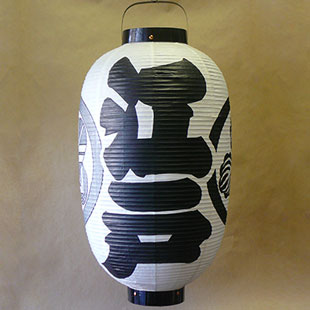 Chochin paper lanterns are a staple of traditional Japanese imagery—but they also illuminate the rich history of the nation’s arts. Characteristically created as a collapsible lantern with a spiral bamboo frame and washi paper covering, and hand-painted with family crests and kanji lettering, the chochin is often present at festive events—while the red variations typically mark the entrance to izakaya.

The lamp’s history traces back to the Bunki era (1501-1504) of the Muromachi period (1337-1573), when the kago-chochin (lanterns within bamboo baskets) used at the time served as the prototype for the conventional chochin. The initial design evolved into a collapsible lantern during the Tenbun era (1532-1555), and later adopted a skeleton using split-bamboo hoops, with the chochin becoming a well-established luminary device by the Edo period (1603-1868). 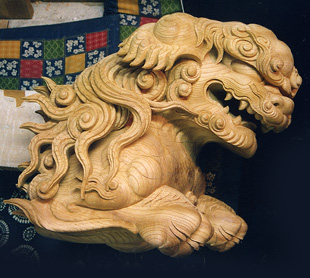 The art of wood carving, or moku-chōkoku, is said to have begun at the same time as Buddhism was introduced to Japan around the sixth century. Buildings and spiritual establishments were embellished with carvings of Buddhist iconography, which appealed to the senses of the aristocracy.

By the Edo period (1603-1868), the trade had evolved: in compliance with the delicacy and simplicity of the Zen Buddhism aesthetic, wood carvings had moved away from statuesque imagery and more into the abstract and decorative. As Japan westernized in the Meiji era (1868-1912), so did the architectural style and, consequently, the carvings.

To produce a three-dimensional sculpture, the design is first drawn directly on all four working surfaces—and the quality of the finished work is as much dependent on these sketches as on the craftsperson’s carving skills. Constructed in the early Showa era, the Diet Building incorporates masterpieces of sculpting that were executed by a team of 300 craftsmen over period of more than three years. 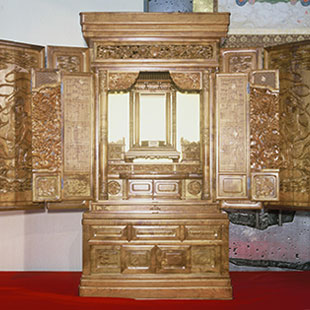 In Japan, spiritual households are often equipped with butsudan, or Buddhist altars. These altars are typically wooden cabinets that serve to display statues of Buddha during religious practices and rituals, keeping the icon enclosed and protected at other times. The miniature shrines also are believed to be the center of spiritual activity within the home, generally used to communicate with and pray for ancestors.

The prominence of the butsudan dates back to the arrival of Buddhism in Japan in the mid-sixth century, although it wasn’t until the Genroku era (1688-1704) that the altars began to be manufactured in large quantities as the Tokugawa shogunate encouraged the strengthening and protection of Buddhism.

Butsudan are typically constructed without the use of nails, employing instead various joinery techniques. The altars are engraved with images and refined with natural lacquer, which is then polished to a gloss. 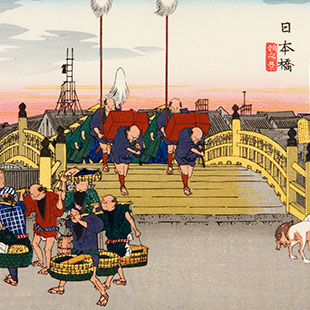 While moku-hanga, or woodblock printing, can be traced back to its use in clothing designs over 1,200 years ago, the art only achieved general acceptance with the ukiyo-e prints of the Edo period (1603-1868).

Each ukiyo-e print represents a collaboration between artist, woodblock carver the printer. The artist first prepares an original black-ink drawing on a thin piece of washi, or Japanese paper. This drawing must be reproduced once for each color to be applied to the final print, and the areas to be colored are overpainted with light vermillion to indicate to the carver which points should remain raised. The carver then carves out the drawing affixed to a woodblock (usually cherry wood), creating a separate block for each color. Finally, the printer sets the paper to the inked woodblock and uses a disk-like hand tool called a baren to apply pressure to and rub the reverse side of the paper.

It should be noted that modern creative hanga prints, in which a single person completes all the production processes, are not considered part of the traditional moku-hanga craft. 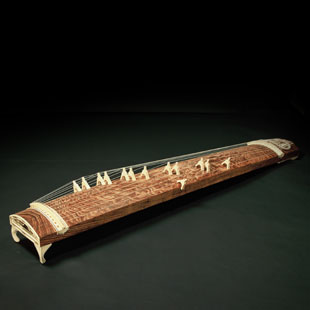 Koto are about 180 centimetres (71 in) length, and made from kiri wood (Paulownia tomentosa). They have 13 strings that are strung over 13 movable bridges along the width of the instrument. Players can adjust the string pitches by moving the white bridges in the picture before playing, and use three finger picks (on thumb, index finger, and middle finger) to pluck the strings, otherwise known as plectra.

The koto, sometimes described as a Japanese harp, is a large stringed instrument adjusted using movable bridges set beneath its 13 silk strings. An evolution of the Chinese zheng, composition for the 13-string koto began in Kyushu with the Buddhist priest Kenjun, who is believed to have lived from 1534-1623—though it was only in the 18th century that music was composed with the koto as the center of attention.

Typically made of paulownia or sandalwood, the Tokyo koto is a slightly shorter and thicker variation of the early instrument with an altered warp, giving it greater volume. A variety of precision tools are used in producing its distinctive shape and the wavy resonance patterns known as ayasugi. 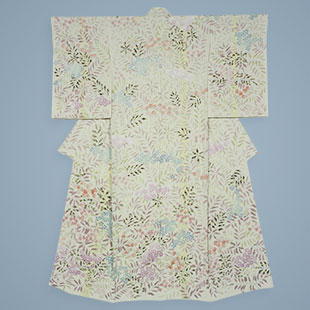 The dyeing techniques of Yuzen-zome (Yuzen dyeing) are said to have been developed in the Edo period (1603-1868) by an artist operating under the name Miyazaki Yuzensai (1650-1736) in Kyoto. The style quickly became known for its light tones and refined designs.

During the Bunka and Bunsei periods (1804-1829), many dyers employed by daimyo lords moved to what was then Edo (now Tokyo), with many becoming established along the Kanda River near what is now Takadanobaba on the Yamanote line. A large number of dye works can still be found in the area to this day.

To produce Tokyo tegaki (hand-painted) Yuzen, preliminary designs are first sketched onto woven silk textiles before dye-resistant paste or wax is applied for resist dyeing. A variety of brushes are used for coloring and the painting of designs, while crests are applied either by brush or with paper stencils. These tasks are carried out in a continuous operation from conceptualization to completion, bringing a sense of beauty and elegance even to garments of a single color.

How to apologize for cultural appropriation

Shamisen, haiku and taiko to go with your bento