While most people dip their toes into the waters of any new industry, Hidetomo Kimura — ornamental fish expert and designer of the annual Art Aquarium project — dove right in. After enjoying a successful career selling coveted aquarium fish to stores throughout Japan, Kimura took a sudden break from the business world to pursue a deeper passion: art. 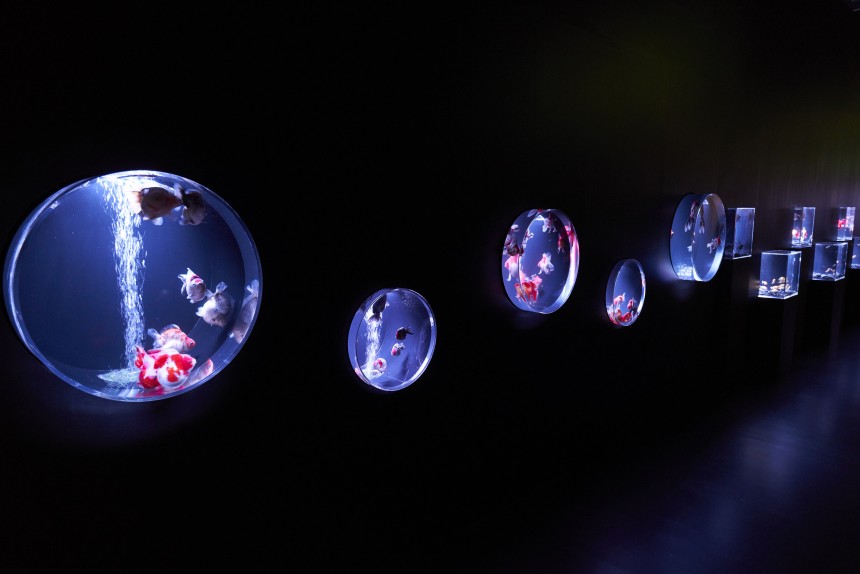 “That was a great business, but the one thing it lacked was creativity,” Kimura says. “You procure something from nature and give it to somebody who wants it. While traveling throughout the world, I realized that there were no spaces in which these fish were being showcased to their fullest potential. The idea of fusing art, entertainment and design with aquariums simply did not exist at the time.”

Armed with years of marine knowledge and a clear vision of filling this void, Kimura created the first-ever “Art Aquarium” — a dynamic exhibition that arranges thousands of colorful, fluttering fish into aquatic wonderlands throughout the country, with recent iterations going as far as Milan and Shanghai. For almost a decade, Coredo Muromachi’s spacious Nihonbashi Mitsui Hall has housed the popular event, which has drawn over 9.45 million visitors worldwide. 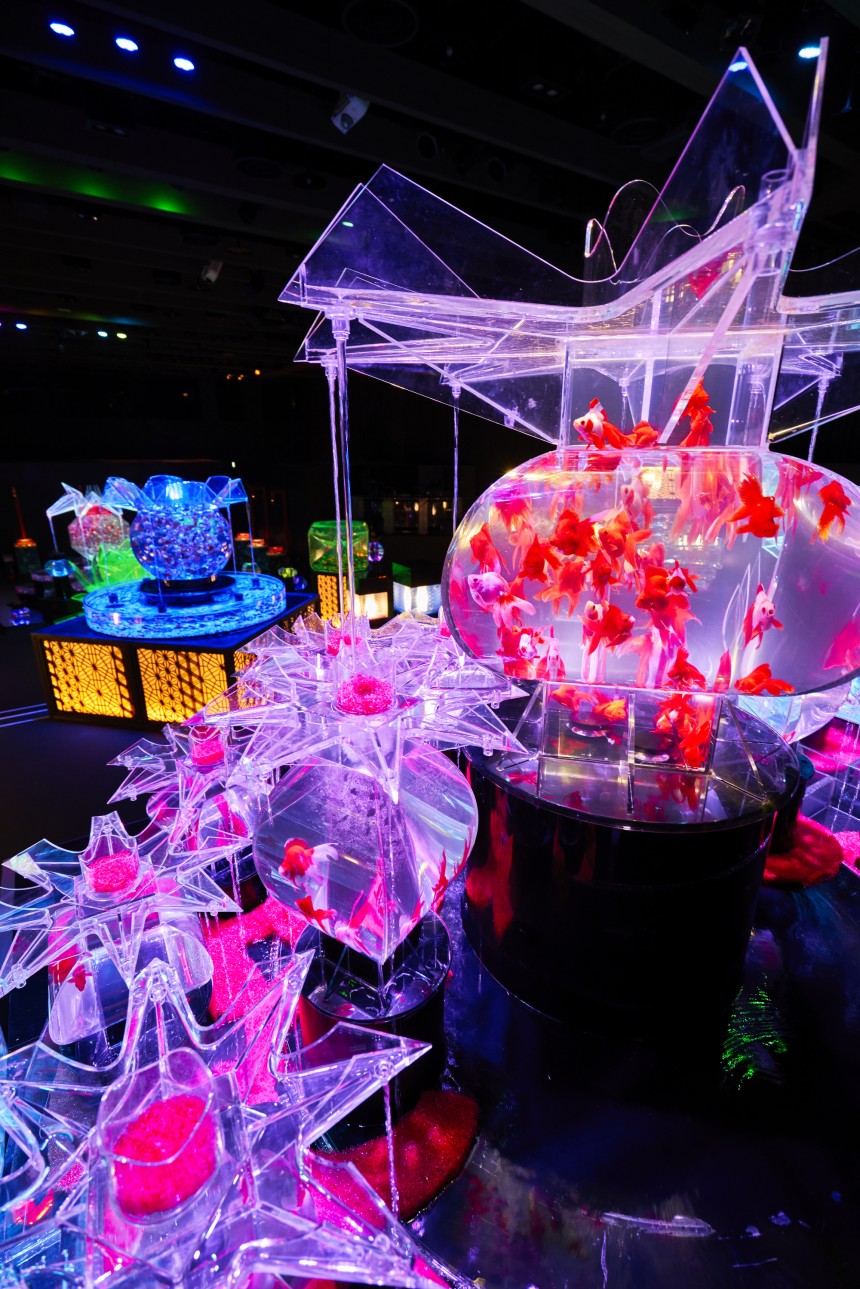 Of his various curations, Kimura’s kingyo (goldfish) series is the most popular. Set in the historically significant Nihonbashi district, the installation titled “Edo: Coolness of KINGYO” does more than shine a trendy light on the brilliantly colored carp. Imported from China in 1502 during the Muromachi period, goldfish were originally an extremely luxurious item that only castle lords or daimyo had a chance to see. It wasn’t until the Edo period that they trickled down to the common household, and Nihonbashi is said to be the birthplace of this goldfish boom.

Today, kingyo are a national symbol of summer in Japan, inherent in most childhoods as fond festival memories or first pets. By imagining new, imaginative spaces to showcase their beauty, Kimura strives to “revive the world of the ‘stylish’ goldfish bred in the Edo period, and to usher them into the modern era, reborn in a new form,” as stated in the program notes. This year marks the final run of the series in Nihonbashi. With over 10,000 goldfish on display, it’s also the biggest Art Aquarium yet. 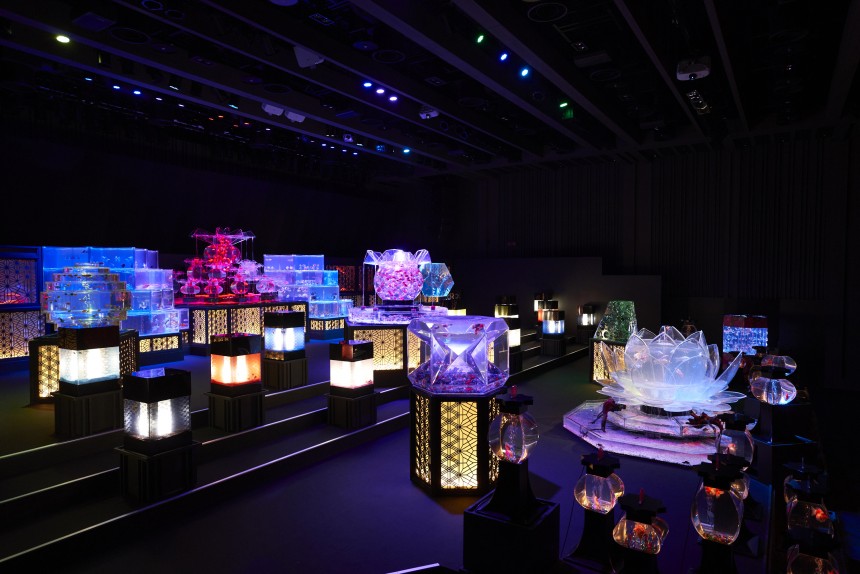 The result is a visually enthralling exhibit whose innumerable subjects, neon lighting and soothing trance music come together to induce a delightful, otherworldly experience. Art Aquarium’s three signature pieces — “Oiran,” “Ohoku” and “Super Oiran” — are on display, along with a new flower-shaped “Lotusrium” installation. Various types of goldfish, including the rare Ranchu breed (the “king of goldfish” in Japan), swim in bright, geometric tanks embedded throughout the darkly-lit venue’s walls and ceilings, creating a totally immersive and even psychedelic environment.

“I wanted these fish to leave a more spectacular imprint in the world,” Kimura says, recalling his merchant days, when most aquatic life amounted to mere transactions between shops and their customers. “People come, take pictures and think ‘wow, this is beautiful.’ In this way, they make a lasting impression. They become a memory.” 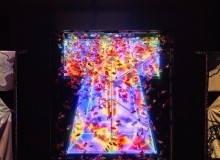 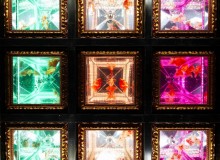 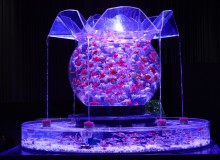 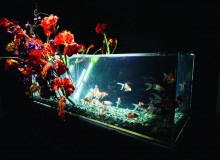 It’s a stunning display, perfect for family outings, romantic dates or a relaxing solo visit. At night, the mood shifts and the bass goes up a notch as the venue transforms into an evening lounge. Guests can sip on original kingyo cocktails, Dassai sake and wine as they mingle and dance among thousands of swirling goldfish. Art Aquarium also runs special events like the Geiko and Maiko night which runs from August 6 – 8, with DJ events on the weekends hosting some of Japan’s top artists.

A thoughtful intersection of history, place and contemporary design, Art Aquarium serves as a singular entertainment hub and dreamy art scene, right in the heart of Tokyo. In correlation with the district’s final iteration of the exhibit, the 12th annual “ECO EDO Nihonbashi” event invigorates the neighborhood with eclectic art pieces and goldfish-themed menus at nearly 110 local businesses. Both the event and exhibit run until September 23.

Children aged 12 and younger need to be accompanied by an adult.