Back in Time at Kawagoe

Many travelers flock to Tokyo and its picture-perfect landscape of neon and chrome, vibrant with urban activity and modern convenience. However, north of the capital lies Kawagoe in Saitama Prefecture, a portal to a bygone era that abounds with timeless Japanese charm. 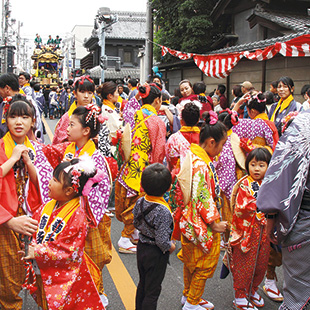 Perhaps what’s instantly striking upon arriving at Kawagoe is the sense of nostalgia embedded in the area’s distinctive warehouse-style architecture. Although Japanese houses were typically made of wood, this former merchant town’s thriving commerce allowed for the construction of low-rise buildings with grey or white clay walls and black clay roof tiles. This was done in part to protect the city from further fires, after several broke out in the 1800s and burned down Kawagoe’s buildings—the most catastrophic being the Great Fire of Kawagoe in 1893, which destroyed nearly a third of the area. But once rebuilt, Kawagoe was indestructible.

Kawagoe’s vintage vibe is most abundant in Kurazukuri Street—the unofficial nickname for culturally-rich Nakacho district—which would make a visitor feel as though they’ve stepped into a Ghibli movie. A fifteen-minute walk north from Hon-Kawagoe Station, Kurazukuri—which translates to “building a warehouse”—comprises several blocks housing more than 200 structures in the iconic warehouse style. Many of these homes have been converted into stores selling traditional crafts and delicacies, and the aroma of Japanese barley or green teas wafts from some of the storefronts. Many of these houses line up along the main street of this district, Taisho Roman Dori; occasionally, locals dressed in kimono and other traditional attire roam around.

Kawagoe’s most iconic landmark can be found here: the Toki no Kane clock tower. As history has it, the majestic tower was built in the mid-1600s, toward the start of the Edo Period, and was rebuilt four times following several outbreaks of fire in the city. The bell, which now functions mechanically, chimes four times a day: at 6am, 12pm, 3pm, and 6pm.

The several museums scattered around Kawagoe are comprehensive enough in documenting the city’s rich history to satisfy the curious visitor.

The Yamazaki Art Museum, located by the outer edges of Nakacho, features artwork from local artists. The pieces are few but provide a quaint look at how artists viewed the world around them, and getting to see the interior of the warehouse gallery is a plus. (Adults ¥500, students ¥350; 4-13 Nakacho, Kawagoe-shi, Saitama Prefecture.)

The former residence of an Edo-era tobacco salesman, the Museum of Kurazukuri, across the street from the clock tower, delves into Kawagoe’s history of fires with its display of photos of the city’s beginnings and artifacts from the fire and old-style firefighters. (Adults ¥100, students ¥50, children free; 7-9 Saiwai-cho, Kawagoe-shi, Saitama Prefecture.)

While not a museum, the Osawa House has its share of stories to tell. Built in 1792, the Osawa House is the oldest storehouse in Kawagoe and one of the few remaining storehouses from the Edo Period (1603-1868).  (1-15-2 Motomachi, Kawagoe-shi, Saitama Prefecture.)

For lovers of color and confectionery, the Kashiya Yokocho—or “Candy Alley”—offers treats for all the senses. Tucked away to the side of the main path, Candy Alley retains the retro vibe of the Meiji Period (1868-1912) when its first candy shop was opened, and shortly thereafter blossomed into the candy-filled backstreet it is today. Mom-and-pop candy stores line the streets selling homemade confectionery utilizing candy-making methods of yore. Toy stores are also sprinkled throughout, where guests can stop and play with Japanese tops, yo-yos, and a myriad other fun gadgetry from a simpler time.

Quiet 1960s Japan-type coffee shops are also nearby for a quick repose from wandering around.

Kawagoe’s popularity peaks every third weekend of October, when the 360-year-old Kawagoe Festival draws in tourists from around the country with its lively percussive music and accompanying dance, and massive floats ported around. Off-season, images from and information about the festival, which has become a symbol of the city, can be found at the Kawagoe Festival Museum (2-1-10 Motomachi, Kawagoe-shi, Saitama Prefecture).

While much of Kawagoe is accessible on foot, the most convenient mode of transport is the Koedo Loop Bus, which can be taken from Kawagoe, Hon-Kawagoe, and Kawagoe-shi Stations. The bus route goes through a majority of the popular sightseeing destinations, including those in Kurazukuri Street and other nearby sites such as Kitain Temple and Honmaru Goten. The bus comes around every 30 minutes.

Exploring one of the oldest shopping districts in Tokyo

Tracing the history of Tokyo’s cuisine