As the music begins, six gymnasts spring to life in flawless synchronization before launching into an explosive series of backflips across the spring floor…

Sports anime has been popular for decades; there’s a series for nearly every sport imaginable. Recent Fuji TV anime Bakuten!! (Backflip!!) introduces freshman Shotaro Futaba and his teammates from the Ao High Men’s Rhythmic Gymnastics Club as they work to make the inter-high school championships.

Set in Miyagi, Bakuten!! is one of three projects from the Zutto Oen Project 2011 + 10 in remembrance of the 2011 Tohoku earthquake and tsunami. Animated by ZEXCS, directed by Seishiro Nagaya and Toshimasa Kuroyanagi with character design by Robico and Yuka Shibata, Bakuten!! had assistance from the Aomori Yamada High School Men’s Rhythmic Gymnastics Club. Former club director Sakae Arakawa supervised the technical aspects of the show, including men’s RG terminology as well as checking animated sequences for accuracy. A number of top high school and college gymnasts and men’s RG performance groups BLUE TOKYO and BLUE Athletes participated in the motion capture for the show’s eye-popping 3D rotoscoped routines.

Bakuten!! viewers may be surprised to learn that this powerful, expressive sport was invented in Japan 70 years ago. Japanese men’s rhythmic gymnastics combines toshu, or freehand exercises like handstands and balance, with tumbling and acrobatic elements. Bakuten!! does a great job of explaining the rules, required skills, and men’s RG scoring in an approachable manner without being overwhelming. The sound design and use of camera angles is electrifying; you really feel like you’re soaring on the spring floor with the gymnasts.

Music plays a crucial role in rhythmic gymnastics. Bakuten!! composer Yuki Hayashi (Haikyu!!, My Hero Academia) is a former men’s rhythmic gymnast who started out composing his own musical accompaniments in college. “Without music, the athlete’s performance would be inadequate. It is an important element that can amplify the brilliance of the performance many times over,” Hayashi says.

His favorite track from Bakuten!! is “Make It Yourself.” “Many of my former classmates are now teaching men’s rhythmic gymnastics as schoolteachers. I’ve seen them struggling and suffering every day to spread this sport, and they are working together with their students to achieve their dreams. So I wrote this song in praise of their efforts,” Hayashi says. “I hope that people from all over the world will watch Bakuten!!, and that this sport, which is only performed in Japan, will spread all over the world.”

There are around 1,500 men’s rhythmic gymnasts across Japan. And the sport is making inroads abroad: several top Japanese college teams have been featured at exhibitions in Europe and the United States and have even performed at the Olympics, while Cirque du Soleil features Japanese athletes and artists from a variety of disciplines including synchronized swimming, figure skating, dance and gymnastics. Cirque first debuted men’s RG in Michael Jackson: The Immortal World Tour in 2011.

According to Cirque du Soleil casting director Pavel Kotov, men’s RG is a very strong fit for Cirque’s performance style of “high-precision sophisticated acrobatic elements and artistry executed in perfect synchrony.” To create perfect choreography, Cirque artists are actively involved in a show’s creation process. Like Bakuten!! team routines, the men’s RG acts in Michael Jackson ONE (2013) and Drawn to Life (November 2021) “illustrate a perfect synergy and precision of movement.” 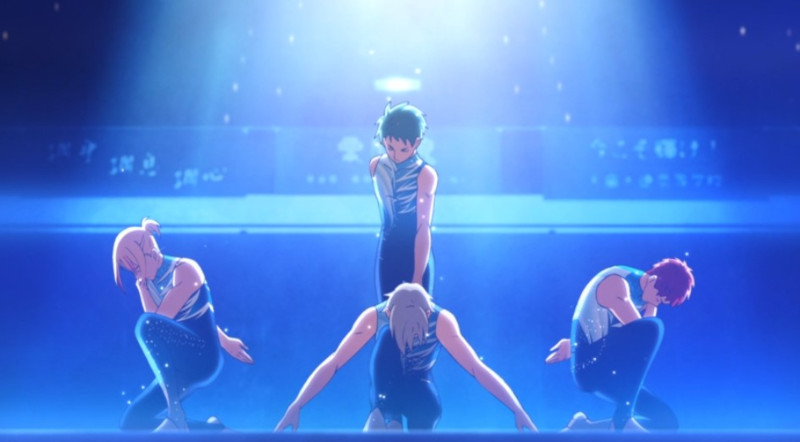 Drawn to Life artist Wataru Ito is a national all-around champion and has performed men’s RG since he was three. Ito writes about Bakuten!! in English and promotes the sport through his blog and SNS. “Although the sport is called ‘rhythmic gymnastics,’ what we do is totally different from what women do,” Ito explains.“ There are a lot of people around the world who do amazing tumbling, but only men’s rhythmic gymnasts can do synchronized tumbling and crossovers. I think that’s the reason why we create a strong impression on audiences abroad. If someone who knows the sport watches our show, they’ll know it’s men’s RG at first sight.”

Aomori University gymnast Takumi Shimizu spent a year abroad as an exchange coach at Boston Rhythmic. He taught men’s RG basics to American boys while studying English. “After returning to Japan, I wanted to keep spreading men’s RG all over the world to take advantage of this experience. “I hope the sport of men’s rhythmic gymnastics will become more familiar and that more boys will raise their hands to do it.” Shimizu produces English-language men’s RG videos to help internationalize the sport.

Through shows like Bakuten!! and international performances, Japanese men’s RG is reaching global audiences and inspiring a new generation of men’s rhythmic gymnasts. Perhaps Takumi explains it best: “I would like the world to know what is beautiful by doing or watching men’s rhythmic gymnastics,” he reflects. “It means skill, body and heart. It is Japanese culture. That is very simple but very important.”

Bakuten!! is available on DVD and Blu-Ray; there is also an upcoming movie in the works. Overseas, Backflip!! can be streamed with English subtitles from Crunchyroll.