Interview with the UK’s no. 1 competitive eater

Adam Moran’s existence seems like a juxtaposition. The UK’s best independent competitive eater, he earns his living by getting in front of the camera, then eating. And eating… then eating some more. He eats so much that he’s mesmerized hundreds of thousands of viewers on his YouTube Channel (BeardMeatsFood) and has gained massive followings across the social media board. Yet, he’s an incredibly fit man who clearly follows a strict regimen to keep in shape and maintain his health. In fact, he manages his diet on a level some would consider extreme. But his health (and success) posits a challenge to countless modern diet trends and he serves as a foil to so many “healthy living” gurus and influencers, an important reminder that there is more than one way to be healthy. As part of our food issue, Metropolis spoke to Moran about his history and lifestyle.

Metropolis: How did you begin your career as a competitive eater and Youtuber?

Adam Moran: Long story short, I’ve been into health and fitness since my early twenties. I did this really long diet just over four years ago now, just to see how lean I could get. There are actually a few pictures online of me in that condition if you google me. After I was done with that, my fiancee Lindsey said she’d seen a local food challenge at a restaurant which she thought it would be fun for me to do; as like a cheat meal or whatever you’d like to call it. If I recall it consisted of twelve burgers, a pound of fries and two pints of milkshake. Anyway, I finished it, thought it was a lot of fun, so I did a couple more across the country over the next few months. Soon after that I started my YouTube channel as kind of a hobby at first. After a little while I gained momentum and now it’s my full time job. Funny old life, isn’t it?

M: When you first decided to become competitive, did you have any fears or concerns? Were you afraid for your own health?

AM: Not in the least. I know enough about health and nutrition to understand the acute and chronic effects of certain foods on the body. When people watch my videos they sometimes forget, amongst the madness, that ‘competitive eating’ or whatever you’d care to call it, takes up about one hour of a 168 hour week. The rest of the time I’m eating meticulously well, following a rigorous strength training program and staying active. I get quarterly blood checks too just to make sure everything is ticking over as it should be.

M: Eating large proportions of food at one time seems to be uncomfortable. What are some of your strategies and techniques that help you avoid discomfort and other issues after eating? What motivates you to keep going when you’re full?

AM: It really depends on the scenario. If I’m shooting a video at home just for my channel, then there’s no real motivation other than blowing people’s minds with what I can put down. If I’m taking on one of these ‘eat it all and eat for free’ restaurant challenges then I’m just motivated by doing something most people can’t. Actual head to head professional contests that I do occasionally in America are different still. Generally, eating contests where you’re trying to eat as much as possible in ten minutes, you’re competing for prize money in addition to athletic pride. At the elite level, professional eating is really similar to other sports in that regard. You compete because it’s fun, but because it’s a talent or a skill, however absurd people might find it, and you wanna do well because it’s fun and rewarding to compete. 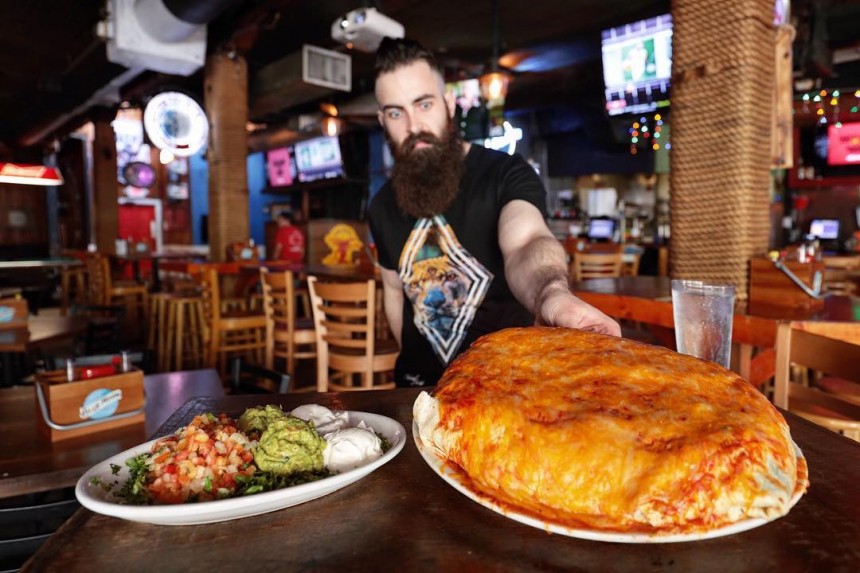 M: How do you train, when you’re off camera and not competing, for your eating sessions?

AM: Again it really depends on what I’ve got lined up. Given the length of time I’ve been doing this now, I look at my week to week activities kind of like training. Of course it’s fun for people to watch me try to eat 8lb of pancakes or 12lb of cereal, or whatever it may be, but at the same time it’s like practice for me. If I have a contest on the horizon on the other hand; for example right now, I’m about to head out to the Calle Ocho World Croqueta Eating Championships in Miami, then training looks quite a bit different. Generally, it entails trying to improve eating speed and drinking a lot of liquids to make sure your stomach is well prepared for rapid expansion in a more speed-eating format.

M: You’ve been doing this for a long time now. Do you still enjoy it?

AM: Haha. Yeah sure. I mean the day I don’t enjoy it, I’ll stop. Honestly, I think of the eating as almost circumstantial. I’m passionate about creating video content that makes people laugh, that families enjoy together, just like a TV show. I don’t think I would’ve amassed over 500,000 subscribers on my channel if I just sat down and ate food for example. It’s more about creating fun entertainment. It just so happens that the ‘talent’ that allows me to do that is being Britain’s biggest eater. There are occasions where I think ‘what on earth am I doing here,’ but I suppose that’s true of all kinds of jobs, and to be frank I enjoy what I do now a great deal more than what I used to do for a living, and that was working as a manager at a retail stockbroker.

AM: I think everyone is different. There are some elite eaters like Molly Schuyler who once ate something like 200oz of steak in 20 minutes, so clearly has a real love of meat. There are others like my buddy Wayne Algenio who’s a Guinness world record holder for most Carolina Reaper peppers eaten, that specialise in spicy foods. Personally, I find carby stuff easiest and most fun to eat. Give me pancakes all day long. Typically, the hardest things to eat in large quantities, for me at least, are high sugar things. Things like chocolate, cake, ice cream can be really rough to eat when you’re putting down over 10lb. Not to mention they tend to have the most severe after-effects too.

M: What is your favorite food?

AM: I get asked that question a lot and honestly, I don’t really have one favourite food. It tends to depend on what kind of mood I’m in. I think maybe if I had to eat one thing for the rest of my life it would probably be french toast.

M: Are you allergic to any food?

AM: No. Fortunately I’m allergy free.

M: You must have an incredible amount of knowledge about nutrition and keeping a healthy diet. What advice would you give to the general public about eating and maintaining their health?

AM: Read, haha. That would be my advice. There’s such a glut of misinformation out there about dieting, weight management, exercise etc. that people tend to forget that we’ve understood for a very long time the basic mechanics of how a human body works. People might see me eating 10,000 calories in a sitting and think “how can a person do that and still be in shape,” but it’s just basic mathematics. I know my body well enough that I know I need to take in roughly 3,000 calories a day to maintain my bodyweight. But you needn’t compartmentalise your calorie requirements into a 24 hour period. I know that I need 21,000 calories a week to stay the same weight, so if I eat 10,000 calories on a monday, then I could just eat 1800 calories a day for the rest of the week and hit the same grand total as if I’d just eaten an even 3,000 every day. It’s all about basic calorie management. It takes some practice, and I’m not saying everyone should do it, but if you like a bit of a binge on a Saturday night, there’s nothing to stop you applying the same principles as I do. Just undereat for a couple of days around that one ‘bad day.’