Experience hanami in one of Tokyo’s stunning traditional gardens

They have arrived. Despite snow on the first day of spring, cherry blossom buds powered through the freezing rain and will be blooming throughout the city over the next couple weeks.

Boozy and food-fueled hanami are the standard celebration for many, but there are plenty of alternative ways to take in the beauty of the fleeting sakura season. If you’re looking to avoid the Ueno crowds or the Yoyogi rowdiness, consider a more sophisticated strolling hanami through one of Tokyo’s many traditional Japanese gardens.

The Tokyo Metropolitan Government is hosting its annual Tokyo Great Gardens Spring Campaign, which includes longer hours, free English guided tours and traditional musical performances in Japanese gardens throughout the city. To take advantage of these events (running March 17 – April 15) and enjoy cherry blossoms a different way, take a look at our rundown of the best Japanese gardens in the city for sakura sightseeing.

These renowned grounds once belonged to a famous feudal lord, but in recent decades have gained a reputation as one of Tokyo’s finest traditional gardens open to the public. Perhaps best known for its fall foliage, in spring it draws visitors for its stunning shidarezakura (weeping sakura tree). At 15m tall and 20m wide, the trees petal-lined limbs are dramatically lit every evening after sundown during sakura season. To facilitate the full sakura illumination, Rikugien is extending its hours from 9am – 9pm every day from March 21 – April 5. Located in Bunkyo-ku, Rikugien is within walking distance from both Sugamo Station and Komagome Station. 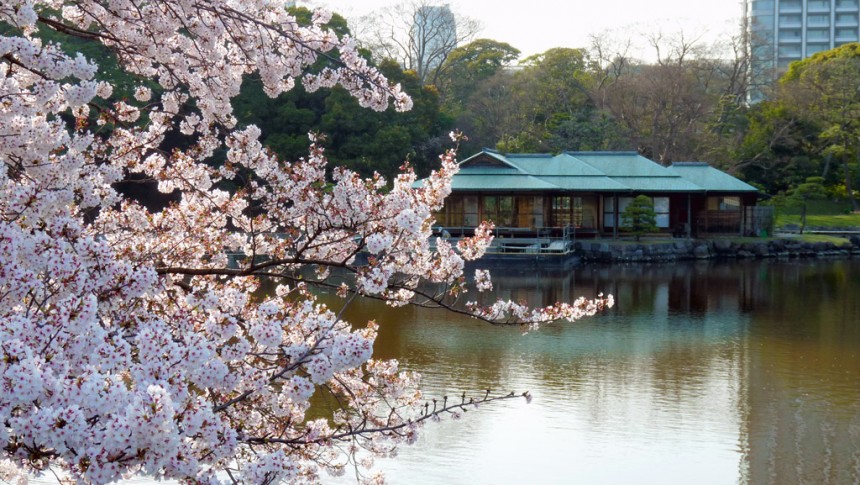 Located on the edge of Tokyo Bay and within walking distance from Tsukiji fish market, this former detached imperial palace may be popular year-round among tourists for its seasonal flowers, but is often underlooked by Tokyoites during cherry blossom season. Hama Rikyu does not have the striking wall of sakura of say, Ueno Park. However, the garden includes rarer varieties of sakura in addition to standard cherry blossom fare. These diverse flowers including the yellow ukon zakura and the pale green gyoiko-zakura. Free English guided tours of the garden grounds and its unique seawater tidal pond will be available at 11am on Saturdays and 10:30am on Mondays during the Great Gardens Spring Campaign.

Another former imperial garden, Kyu Shiba Rikyu is much smaller than the other gardens on this list, but it often noted as one of Tokyo’s most beautifully designed gardens (with elegant rock work) and one of its oldest (dating back to the Edo period). Adjacent to Hamamatsucho Station, the garden is located on the eastern edge of Minato-ku near Tokyo Bay. During sakura seasons the grounds are host to a series of traditional musical performances. 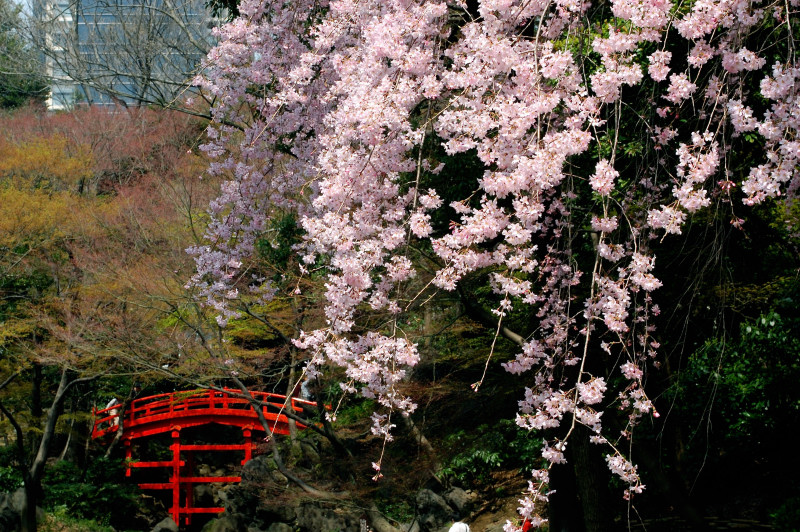 Perhaps Tokyo’s most respected traditional Japanese garden, Koishikawa Korakuen is an early Edo institution once owned by the Tokugawa family. Like most gardens from this period, the grounds are designed for strolling and arranged to imitate famous Japanese and Chinese landscapes. During cherry blossom season, the garden is home to the most robust number of sakura trees on this list, including a few smaller weeping sakura trees. The garden will have extended hours from March 17 – April 5th from 9am – 6pm (last entry at 5:30). Located next to the Tokyo Dome complex in Bunkyo-ku, the grounds are easily accessible from Korakuen Station and Iidabashi Station.