Yumi Katsura: Beyond East and West

Delighting our senses with opulence and glamor, Japanese fashion designer Yumi Katsura held an exquisite runway show in the ballrooms of Akasaka Palace, the first time a fashion event has been allowed to run in this splendid location. Titled “Beyond East and West”, the collection was designed to showcase Japan’s innovative craftsmanship with a seductive fusion of old and new. As the name suggests, in “Beyond East and West”, the fashion of two cultures intertwine in a display of haute couture at its best. 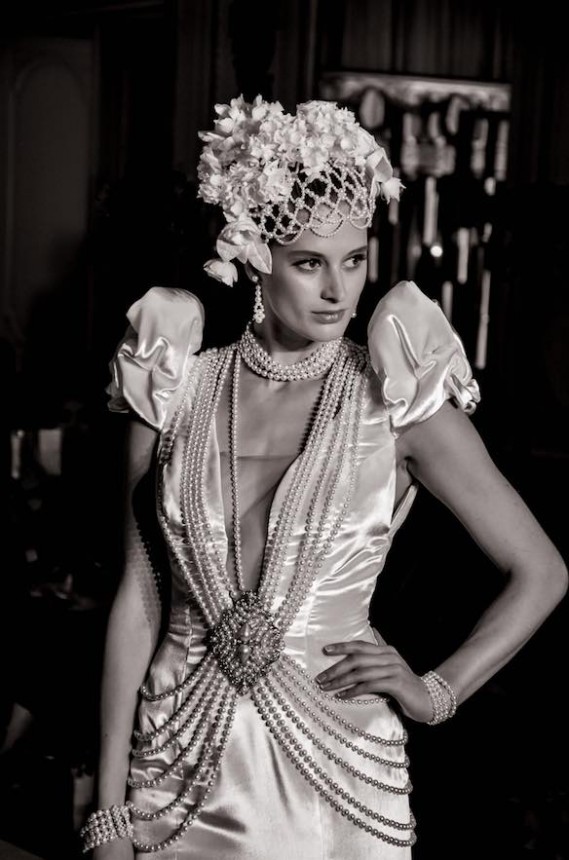 Yumi Katsura’s career began some 53 years ago as Japan’s first fashion bridal wear designer and through the years it became her personal mission to preserve traditional Japanese textile crafts such as yuzen, shibori and intricate weaving techniques. Although she has a deep knowledge of Japanese aesthetics, her style is all her own with a pursuit of ‘unpredictable beauty’ that leaves the viewer with a sense of surprise.

Rinpa painters of the Edo period, such as artist Hokusai’s Great Wave, in collections that have been shown in Tokyo, Paris, New York and Rome over the years. Her unique approach to modernizing the traditional aesthetics of the Japanese kimono with a contemporary flair is creative and bold. Her Mount Fuji ball gown is a feast for the eyes as is another gown with sumo wrestler motifs embroidered onto silk silhouettes. Likewise, the Nishijin woven peacock tail train dress is a visual masterpiece.

The menswear collection and traditional wedding kimonos were a kaleidoscope of color and artistry, preserving traditional Japanese techniques into the modern day and introducing Japanese beauty to the world.

With an inquisitive mind, a creative spirit and a camera in hand, Louise is a self proclaimed Global Citizen who is inspired by her colorful life of travel and adventure. Louise has embraced her entrepreneurial skills and created her own women’s fashion brand, designing luxurious Japanese Obi and Kimono embroidered bags and accessories. She has also established herself as a fashion and portrait photographer in Tokyo and aims to create beauty, truth and artistic expression in her images. Now part of the Metropolis team as a Fashion and Lifestyle writer and photographer, she shares her vast knowledge, fabulous inspirations and insights with the readers of her regular features. Follow her for the latest on Instagram @edenthecollection