With everyone from Gwyneth to Kylie Jenner photographed sipping almond milk matcha lattes or brandishing matcha whisks and other chadō (tea room) paraphernalia, Japan’s iridescent green tea powder has dominated the country’s tea export scene in recent years. Ragingly high in antioxidants, with a color akin to the Ninja Turtles, caffeine levels that provide a class-A energy hit, and a novelty ceremonial preparation technique make it easy to see why green tea has garnered such a cult following worldwide.

The camellia sinensis plant, from which matcha and other Japanese green teas are cultivated, was introduced to Japan by Zen Buddhist monks in the 9th century, who brought tea back with them from their religious studies in China. Several thousand years before this—according to Chinese legend—the tea concept had been serendipitously birthed by a leaf-carrying zephyr, which dropped leaves into the cup of hot water being sipped on by Chinese emperor Shen Nong. Since then, tea has diversified to include brews of sticks, grains, fungus, feces, seeds, seaweed, flowers, fruit, vegetables, and herbs—each providing unique flavor profiles and health-promoting qualities. And aside from its preeminent bewitching matcha tea powder, Japan has an inventive array of infusions that are worth checking out.

A compound of kombu (kelp) and cha (tea), this beverage is not to be confused with the fermented drink popular in yoga circles, which is not made from seaweed at all. Somewhere along the way, the Japanese term was borrowed—perhaps because of the characteristic thick, slimy-looking growth suspended in liquid of the fermented “kombucha” that resembles kelp in the ocean.

This tea tastes like water scooped from rock pools filled with seaweed that had been warmed by the sun: salty, smooth, cleansing, and distinctly oceanic. It’s less of a tea to have with a mid-morning biscuit, and more a tea to accompany a savory snack such as grilled seafood, a combination found at Japanese festivals; or to satiate hunger, as it’s high umami content makes it a satisfying tipple. Kombucha can be prepared from dried kombu and hot water, or, more commonly, powder. Ume kombucha, a sour plum-flavored version, makes for a slightly more fragrant tipple. 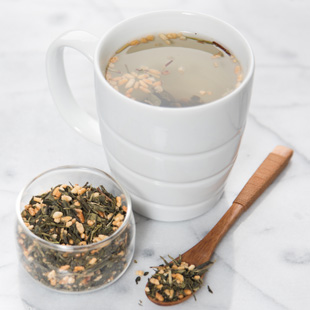 The folk tale beginnings of genmaicha lie with a clumsy ill-fated servant in 15th-century Japan, who dropped rice into the green tea he was brewing for his samurai master, only to lose his head at the edge of a katana as a result. However, after sampling the deliciousness of the new brew, the samurai felt regret over his actions and ordered the tea to be served every morning in commemoration. The true origin, like many culinary greats, was the ingenuity of the less privileged. The historically high price of tea meant rice was added as a filler, making the luxury item more readily available to the masses.

Hōjicha is likely another case of necessity being the mother of invention. The origins of this brew are thought to be with enterprising tea merchants in Kyoto, who began roasting leaves over charcoal as an economical way to make use of residual stems and stalks from tea plants.

This robust tea is for those who like their tea deep and toasty, with caramel, and are after the rich and robust characteristics of black tea, but want to keep things green and clean. It’s also worth noting that the roasting process lowers caffeine levels. 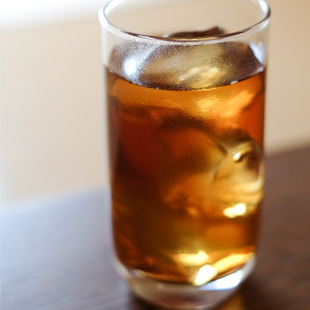 Although mugicha is drunk both hold and cold year-round, cold or iced mugicha is the taste of summer in Japan and, along with cold beer, is regarded as part of a shokibarai (“beat the heat”) regime. Beyond its refreshing nature and light, toasty flavor, the amber-colored tea is antioxidative and antibacterial, promotes good blood circulation, is naturally caffeine-free, and contains melatonin, which aids relaxation and sleeping patterns.

Mugicha is traditionally made from simmering roasted barley kernels in water, although it is now also available in tea bags and features in the standard vending machine bottled beverage lineup.

Kuromame (black soybean) cha (tea) is said to be the “diet secret” of the East, and is a general nutritional powerhouse. It’s high in antioxidants, particularly anthocyanins, which is heralded for its properties that promote anti-aging, cancer prevention, lower cholesterol, and anti-inflammation. High protein and low GI make this tea an alleged weight loss wonder, working as an appetite suppressant.

To prepare kuromamecha, legumes are roasted whole before being steeped, whole or grouped, in a tea bag in boiling water. The result is a tea with an earthy, chocolatey aroma and light, coffee-like flavor.

This tea has one of those “tastes like dirt or old shoes, but in the good way” flavors. Intensely earthy and mushroom-like, gobocha is prepared from gobo (burdock root), a vegetable used commonly in Japanese soups and salads. It’s list of health-promoting accolades, including improving circulatory health, digestive tract health, and skin; treating sore throats and colds; detoxifying; aiding acne, eczema, and psoriasis; and alleviating and preventing gout. And to top it off, it is said to be an aphrodisiac.

Gobocha is available often in a bag of dried gobo shavings, which are also roasted to intensify flavor and boost umami content, but also comes ground further down and in bag, as is the modern way.

Soba (buckwheat) is better known in the form of noodles, but soba cha is the tea incarnation of the healthful flora. There are two main types of buckwheat tea: herbal infusion made by steeping buckwheat leaves in hot water, and soba cha made by infusing roasted kernels or hulls of buckwheat in hot water.

Pale lemon-like in color with a deceptively weak appearance, the tea has a rich aroma and taste that sits between toasted dark bread, butter, and malty beer. Rich in antioxidants that improve circulation, the tea is thought to help the prevention of varicose veins, and have cardiovascular and metabolic benefits.