A fresh perspective on the tired superhero genre

After making a brief appearance in Captain America: Civil War, the Black Panther, aka Prince T’Challa (Chadwick Boseman, who absolutely nailed the James Brown role in Get On Up), returns to his isolated, technically advanced African nation of Wakanda to make a better movie. Oh, and to ascend to the throne.

He is immediately challenged by internal political factions that want to drag the country into a world war. On his side are a CIA agent (Martin Freeman sporting a wonky American accent) and the kick-ass lady warriors of his special forces protection detail. There are no damsels in distress here. 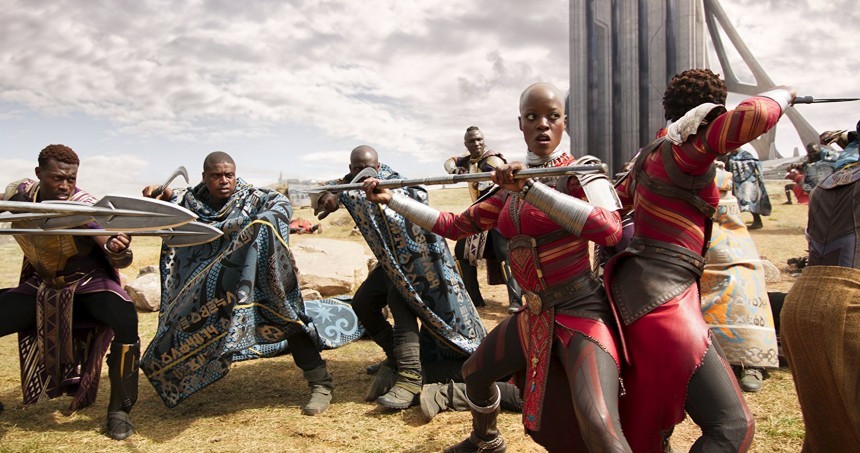 Ryan Coogler’s (Creed, Fruitvale Station) Afrocentric film meets the rigid demands of a Marvel superhero effort (loved the war rhinos) yet manages to remain remarkably grounded and somehow feels fresh. And while it’s visually astounding, it addresses some deep issues and ups the bar for the “Marvel Cinematic Universe” by actually having something to say.

And what a supporting cast! Michael B. Jordan (Creed), Lupita Nyong’o (12 Years a Slave), Danai Gurira (All Eyez On Me), Daniel Kaluuya (Get Out), Letitia Wright, Angela Bassett and Forest Whitaker. And Andy Serkis gets to shed the motion-capture suit (he was Gollum in LOTR, Kong in King Kong, and Caesar in Planet of the Apes) to portray a delightfully over-the-top villain.

This cultural celebration has soul, style and heart, and in places is funny as hell. Usually when you’re least expecting it. Worth seeing for the imaginative set design alone. (134 min)