“In order to build the future, we must face the past,” says punk band vocalist TOSHI-LOW. After the 2011 Tohoku earthquake and tsunami hit Japan, TOSHI-LOW and his band, BRAHMAN, were one of the first artists to head to the disaster site to aid victims. Originally known for their heavy music, sweat-soaked crowds and cold persona, BRAHMAN went from dark rebels to role model volunteers overnight after the magnitude 9.0 earthquake hit the Tohoku region. Clearing rubble, listening to local’s stories and bringing moments of respite from the chaos around through music, were all just the start of a journey of support that continues today.

After the quake, word got out about BRAHMAN’s work, and other musicians began to follow in the band’s footsteps. Despite initial criticism that they were simply aiding the affected communities as a publicity stunt, BRAHMAN continued to support the people of Tohoku over the next ten years to come, and, for the people whose lives they touched, their support has been invaluable.

As the 10th anniversary of the Tohoku earthquake and tsunami approaches, TOSHI-LOW spoke to Metropolis about the past 10 years spent visiting the affected communities and developing the Tohoku Live House Project (東北ライブハウス大作戦), which builds live music venues across the coastal towns destroyed by the disaster.

Artist profile:
TOSHI-LOW: Born in 1974 in Mito, Ibaraki. Founder of Hatagaya Re-birth University (幡ヶ谷再生大学), a non profit organization which intends to support communities and areas affected by serious disasters across Japan. TOSHI-LOW and the other members formed BRAHMAN in 1995. All the members of BRAHMAN also participate in an acoustic music band OAU.

How did the Tohoku earthquake affect you ten years ago?

TOSHI-LOW: I was sort of losing my motivation as I was getting into my mid-thirties. Then the earthquake happened and everything changed. I came to appreciate everything I’d been taking for granted all this time: Being alive, being able to sleep under a roof, being able to perform on stage and fans being excited for our shows. Everything is so special and precious. 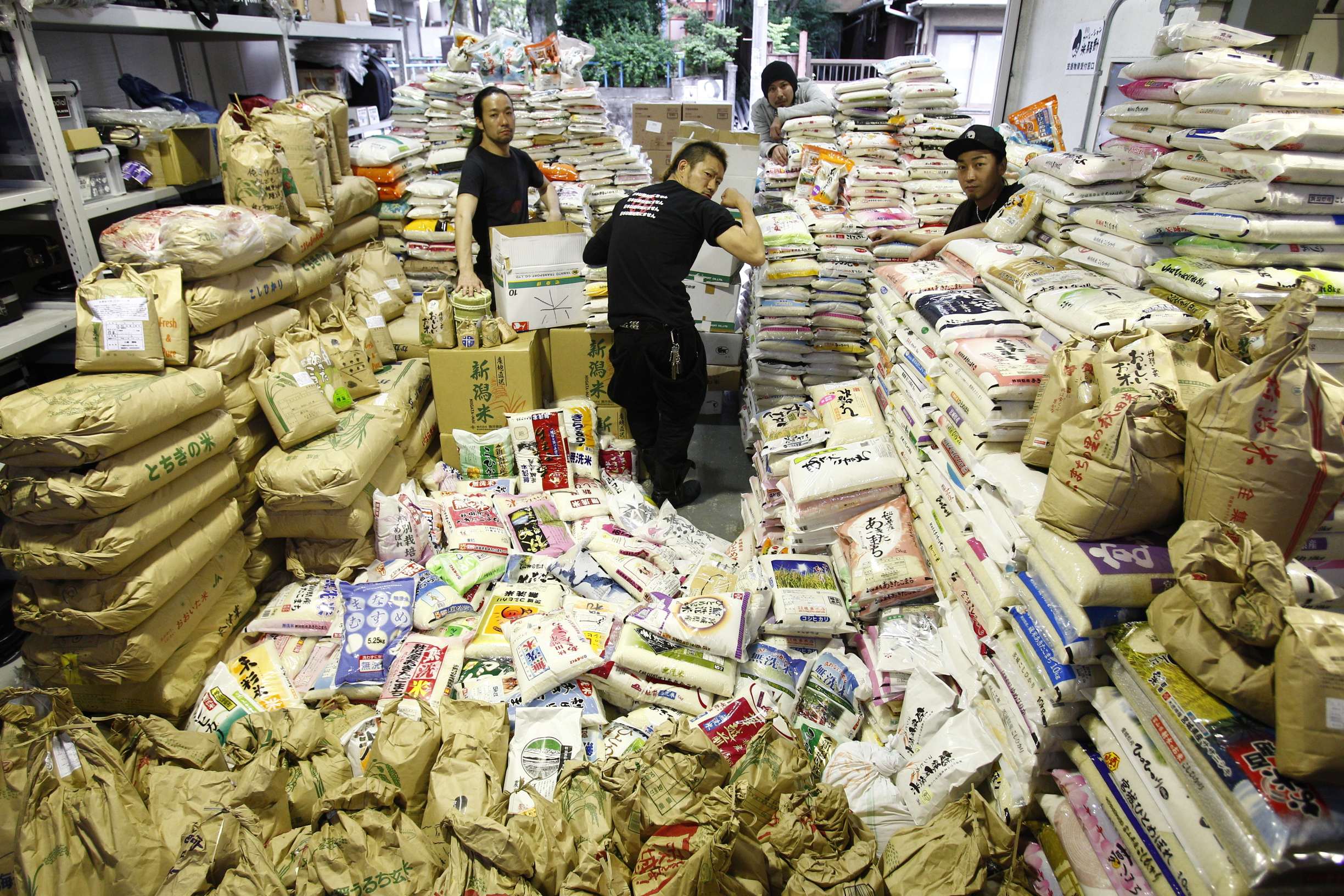 TOSHI-LOW and his band BRAHMAN were among the first bands to head to the Tohoku area in 2011 after the disaster to volunteer. They hosted charity shows and also helped distribute food and clear the debris. At their shows, the band often asked their fans to bring a small amount of food from home — such as a packet of instant curry — to their shows, so BRAHMAN could later distribute food supplies to those in need in the affected areas.

How did the locals react after the disaster when they found out that you were an artist?

When musicians visited Tohoku for volunteer work, we were often criticized as if it was merely a publicity stunt. It was really bad, especially for the first years. But we’re an underground band; we’re not interested in fame and we’re not trying to sell our name by being good citizens. I continued volunteering because I believed in what I saw: real communication with the people in the affected area.

Immediately after the disaster, I was in a badly affected area and someone handed me a guitar. They said “If you’re a musician, play us a song!” I’m ashamed to say it but I actually rejected their request. I’ll never forget their sad faces. At that time, I had this bizarre pride that I’m a member of a band and couldn’t spontaneously play solo like that. Then I thought, “How can I be a professional musician when I can’t even sing a song for people?”

When the Kumamoto earthquake happened in 2014, the same thing happened to me again. Some pensioners at an evacuation site were drinking alcohol and excitedly asked me to sing a song. They seemed so pleased when I sang for them, which made me happy, but I also thought how I wished I could have done this three years ago for the Tohoku people. If you are a proper artist, you should be able to sing and perform at any time and in any place, even without instruments. The stage is not everything.

Before the disaster, it was a trademark style of the band to never speak a word at live shows, only to perform. Now, you often speak to the crowd and make reference to political issues. What changed?

If I look back now, everything I saw and every story I heard was too horrible to keep locked up inside myself. I had to share them with others. I’ve spent a lot of time talking to the people in the affected areas, as well as clearing the rubble. The victims needed someone to listen to what they were going through. They told me their stories, we shared the same feelings and we cried together. Every time I leave, even a decade on, they say to me “Please remember” instead of “See you again” or “Please come back.” For them, March 11 was not just a day which marked more than nearly 20,000 deaths, it was a day when each one lost their loved ones. Like the movie “Remember Me,” the real death comes when people forget about them. I do still talk about the disaster during shows like the local people shared their stories with me, so we can all remember the tragedy.

Why are you still visiting the Tohoku area and hosting music shows ten years after the disaster?

I met many people over the years and want to see them again. There are people waiting for us to come back. The government and media only report the numbers, but statistics can’t even brush the surface of the true tragedy. The people we met opened up to us while visiting them over the years, as we got closer they offered us dinner, then beer and eventually to stay over. Now our ties are strong, like a real family. 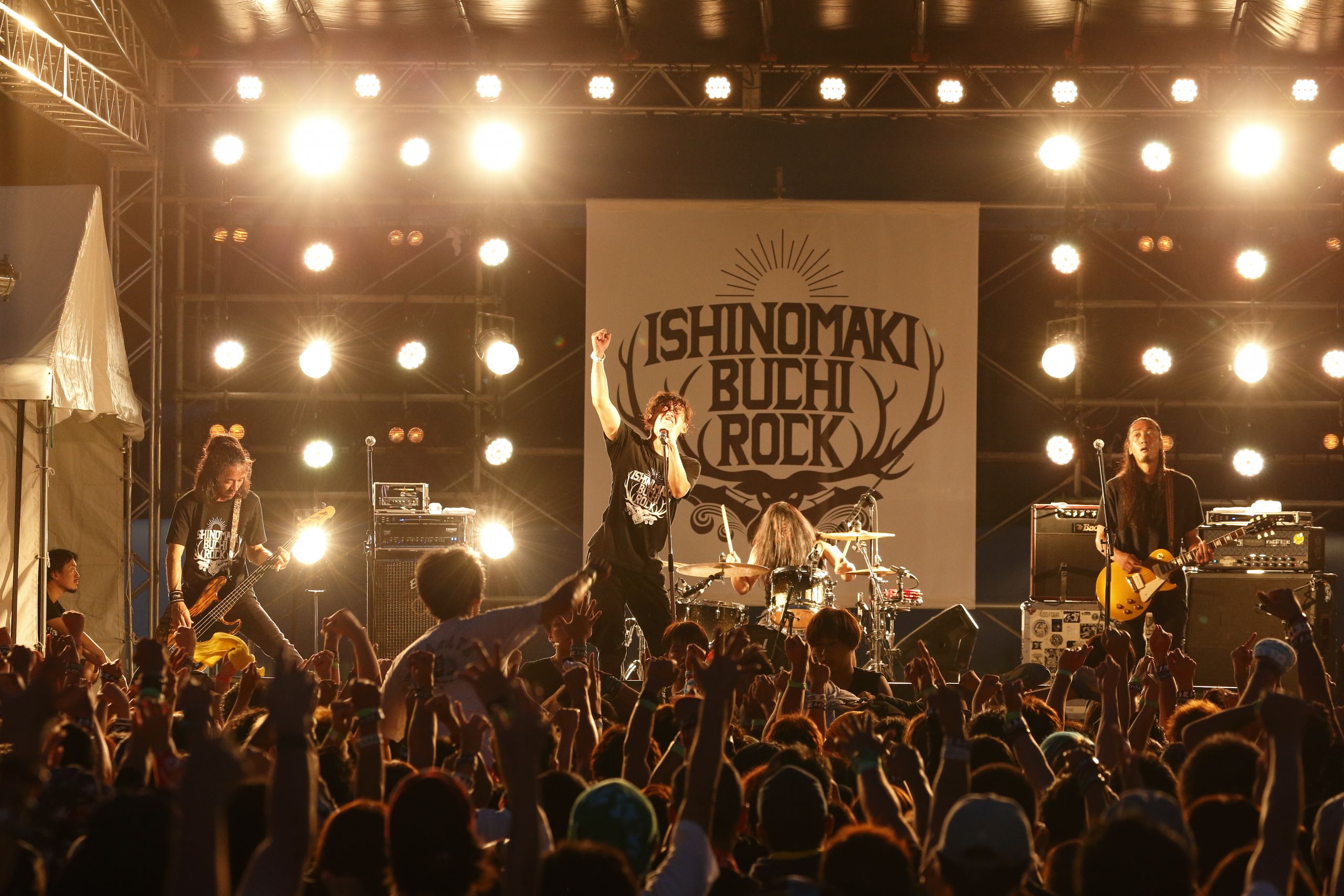 BRAHMAN headlined Ishinomaki Buchi Rock Festival in the summer of 2019 alongside other bands from the punk scene. The festival took place at Ishinomaki’s fishing harbor and intended to showcase and celebrate the city’s revitalization eight years on since the disaster. | Credit: Tsukasa Miyoshi

Along with other bands from the punk scene, BRAHMAN participates in the Tohoku Live House Project. Can you tell us about the importance of those projects for the disaster-stricken communities?

The project intends to build music venues along the coast, so far, we’ve built ones in Miyako, Ofunato and Ishinomaki. If a town has a venue, then a band will visit and more will follow. People from outside the area will also have a reason to return to visit again, helping tourism and industry.

Music isn’t essential like food and housing, but it isn’t just for dancing and fun, either. If you like music, you know music is always by your side, even when you’re having a hard time. We know concert venues are not important to everyone; if someone asks “Why do we need music right now?” they probably never attend live music shows and don’t know how music can save people. We believe in the live houses and know building places like that in the affected areas could at least help people like us, who find them so important for our lives. This project was possibly the best way for musicians to help the affected community in the long term using what we love: music. 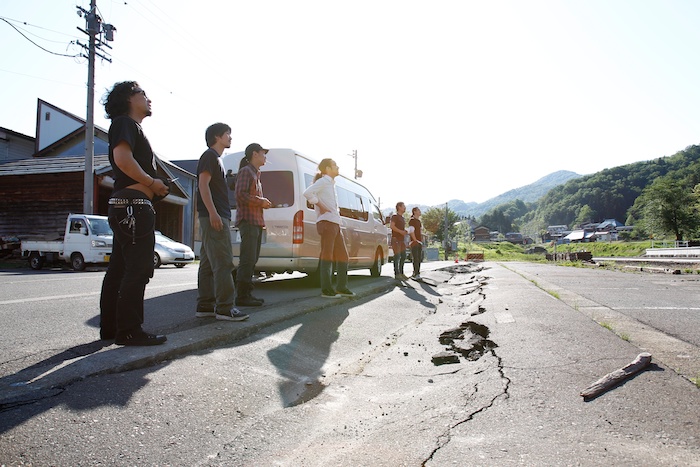 “At times like these, we must put our selfish concerns aside and act for the benefit of the whole community.” — TOSHI-LOW.

10 years have now passed and the affected areas are heading into a new phase of reconstruction. What do you think is the long-term future for these communities?

We still don’t know why so many people had to die and how we could have saved more lives 10 years ago. The official data of the inquest’s post-disaster report has not yet been widely shared with the public. And so, without knowing the real reasoning behind it, they started constructing 12.5-meter-high breakwaters and spent a decade pouring tons upon tons of sand along the coast to raise the land. But I’m not sure if it fundamentally solves anything at all.

A huge earthquake hit the coast of Tohoku in 1896 [the Meiji Sanriku Earthquake]. Historical sites and archives still exist which tell us what had happened, but we didn’t learn anything from the past. What we really need is not 12.5-meter breakwaters that block the beautiful views of the ocean. What we need is a proper investigation to be conducted so that future generations can make the right actions to avoid future disaster. We should put effort into passing down this knowledge from one generation to another or a terrible event will destroy us again. We need conversation about this disaster more than construction. 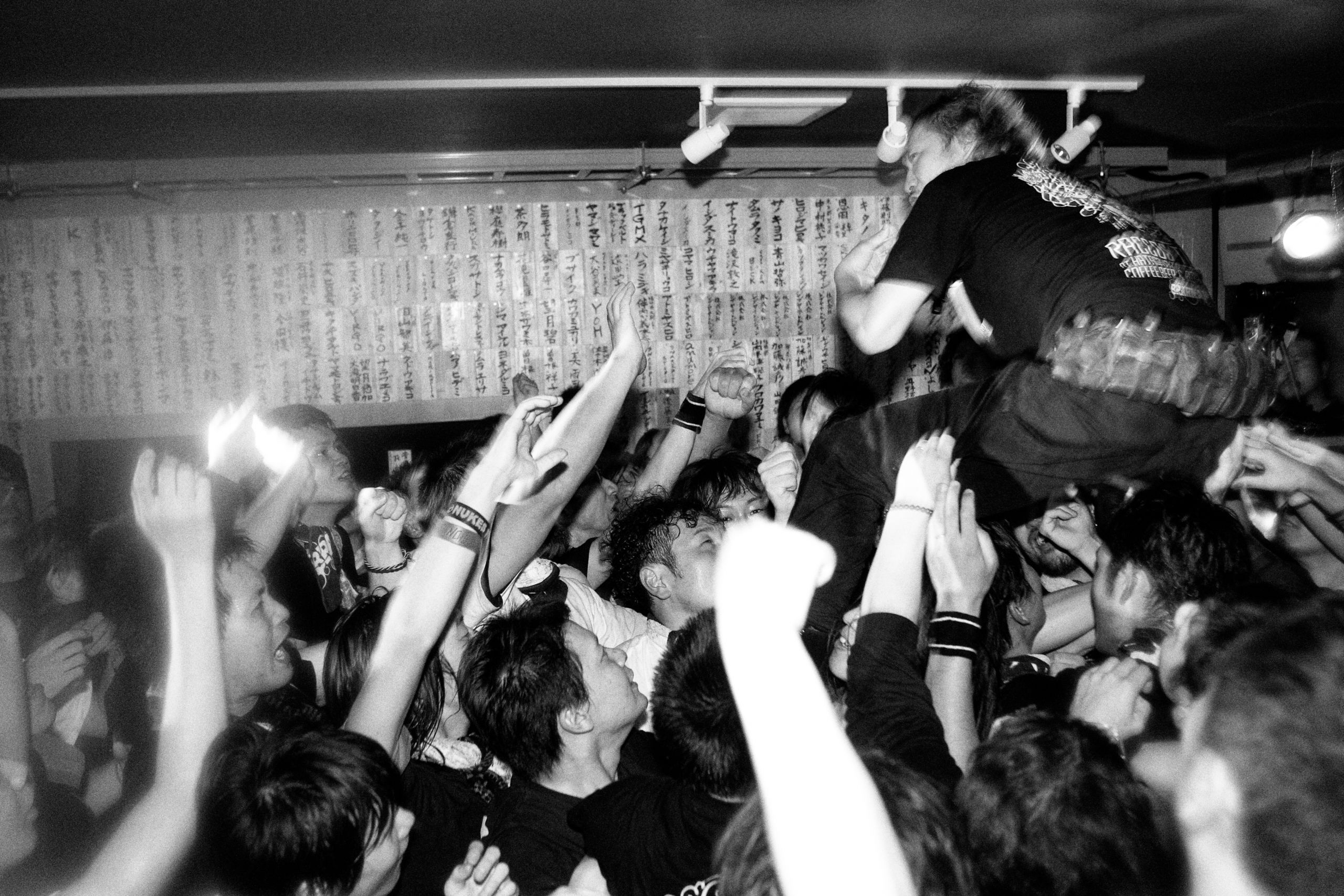 BRAHMAN performing in November, 2012, at Ofunato Freaks — one of the livehouses the band opened as part of the Tohoku Livehouse Project | Credit: Tsukasa Miyoshi

We are making the same mistakes again in this country prone to natural disasters. During this past decade, Japan saw even more disasters across the country and there’s no absolute safe place to be. When we build the future, we have to face the past head-on. There is no room for historical revisionism and glorification of history; no room for discrimination or division between people. For example, after the earthquake many of the small towns battling towards reconstruction and bidding for funding started to dislike each other. One town will ask me why I’m bothering to visit only the next town. It’s really not the time to feel superior over things like how you have electricity in your home while someone in your neighboring town is using candlelight. At times like these, we must put our selfish concerns aside and act for the benefit of the whole community.

What is one memory that you’ll never forget about the disaster and in the ten years towards reconstruction?

One day, I was somewhere in an affected area and it was raining. Rubble was everywhere and huge tanker ships were strewn across the land of the town. It really looked like hell. Then a ray of sunshine came through the clouds and it was so beautiful. Whatever is happening down here, life goes on and nature is amazing. Humans are powerless in the face of nature, but we are still able to feel the beauty of the flowers when they bloom, when the leaves turn red and when snow falls. These elements of nature help us keep going; uplift us and give us power to fight another day. Art gives us hope in a similar way, and it’s a big part of us, just like the blooming flowers.