How Director Keishi Otomo Found Redemption in ‘Beneath the Shadow’

When a six-meter tsunami swallowed the coast of his Iwate home on the afternoon of March 11, 2011, Keishi Otomo was directing a film in Kyoto, unable to do anything except watch the tragedy unfold through the pixels of a TV screen. “I thought about going back to Iwate but my very first independent project had just kicked off and a lot of staff had already started working on the movie, so I couldn’t pause it all and return home,” Otomo recalls. “For the past nine years, I’ve had a sense of guilt because I couldn’t be in Iwate when the tragedy attacked my hometown.” 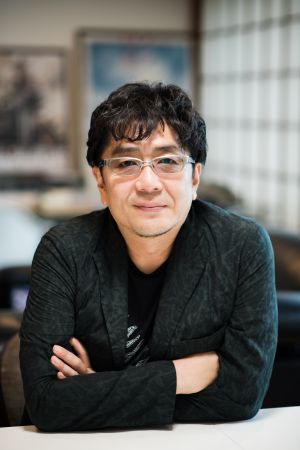 In response to this, he released Beneath the Shadow (2020). Set in the wake of the 2011 Tohoku earthquake and tsunami and filmed in Otomo’s native Morioka, the work was nominated at the New York Asian Film Festival in 2020. Based on the Akutagawa Prize-winning novella of the same name, the film follows the story of Tokyo-born office worker Shuichi Konno (Go Ayano), who forms a friendship with Norihiro Hiasa (Ryuhei Matsuda) while drinking and fishing against Iwate’s natural backdrops. When the earthquake hits and Hiasa goes missing, the protagonist must cope with the unexpected loss and estrangement. “It’s the story of people who were waiting for the return of their loved ones, hoping they are still, somehow, not truly gone,” explains Otomo. Beneath the Shadow is fiction but a lot of real people must have felt like Konno in 2011.”

Otomo’s sense of guilt was finally assuaged when he worked on Beneath the Shadow with the Eiga no Chikara Project, a nonprofit association he founded, which aims to support the victims of the 2011 Tohoku earthquake and tsunami through movies. “If craft beer is beer made from local ingredients, Beneath the Shadow is a ‘ craft’  movie made by people from Iwate and dedicated to people in Iwate. After nine years, I finally had a chance to work on my dream project with my favorite people in Iwate, my favorite actors Go Ayano and Ryuhei Matsuda, and in my favorite place, Morioka. I couldn’t go through the pain together with them in 2011, so I made this movie hoping to give back [to the community].” 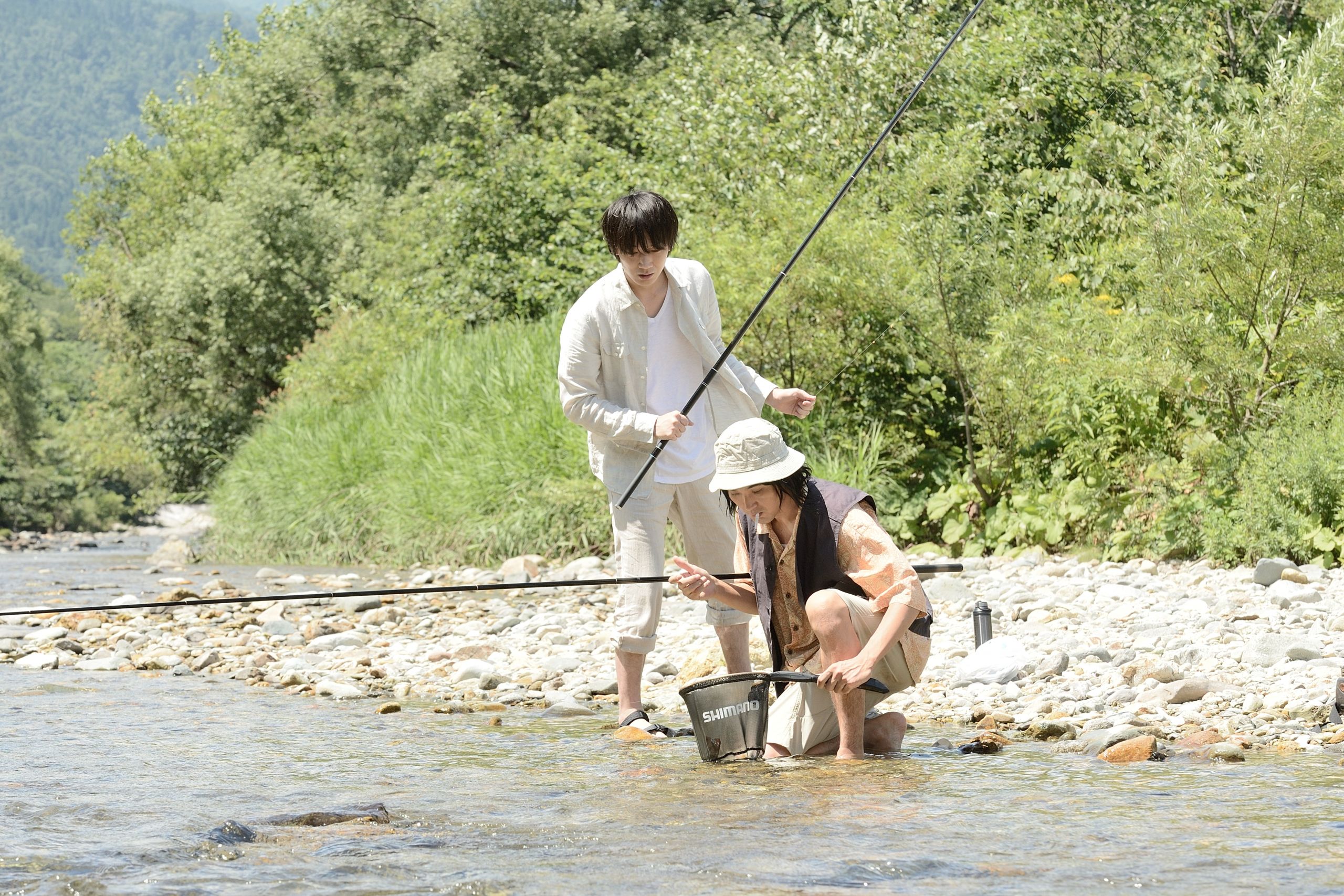 Filmed in Otomo’s native Morioka, Beneath the Shadow is a story of friendship and estrangement in the wake of the 2011 Tohoku earthquake and tsunami. This fishing scene at Kitakami River captures the growing bond between Konno (Go Ayano, I.) and Hiasa (Ryuhei Matsuda, r.) | 2020 Beneath the Shadow Film Partners

For the past nine years, I’ve had a sense of guilt because I couldn’t be in Iwate when the tragedy attacked my hometown
— Keishi Otomo, former NHK director

2011 was to be a year of many other life-changing events in Otomo’s life. Just prior to the disaster, the director made the decision to leave Japan’s national broadcaster, NHK. During his 20-year career there, Otomo worked on various projects, including documentaries and one of NHK’s most renowned historical drama series, “Ryomaden.” Shown over the course of a year in 2010, the series traces the life of the famed 19th-century samurai Ryoma Sakamoto (Masaharu Fukuyama) during the Meiji Restoration. Although Sakamoto, one of Japan’s favorite historical figures, is more myth than man, Otomo’s interpretation of the character is human and down to earth. Often, the director focuses on Sakamoto’s personal feelings, such as his aspiration to change the country, and his perspectives as a low-rank samurai born in the countryside of Japan. 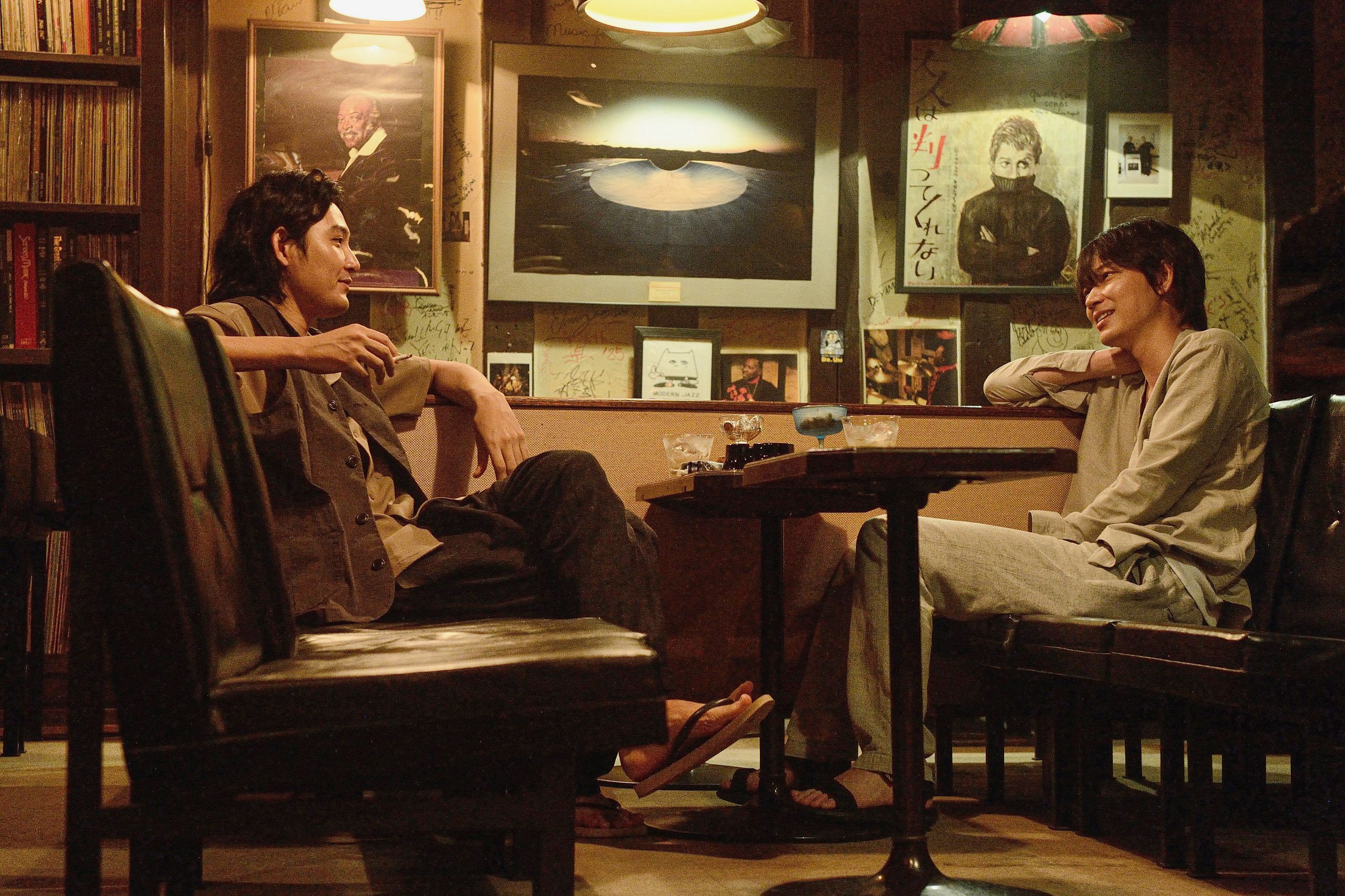 Movie still from Beneath the Shadow featuring actors Go Ayano and Ryuhei Matsuda, whose character goes missing after a tsunami floods his hometown. The film is based on Shinsuke Numata’s Akutagawa Prize-winning novella “Eiri.” | 2020 Beneath the Shadow Film Partners

Otomo’s approach turned out to be a record-breaking success. “Ryomaden’’ earned high ratings and captured the much-needed attention of a younger audience, a welcome shift for a media organization whose main audience for historical dramas is the elderly. Despite this soaring achievement, Otomo left NHK shortly after the series ended, largely owing to his desire for autonomy. “If you are an office worker, your company looks after you almost too well and even files taxes for you. You would never get a sense of managing your own life by yourself. But my job is to direct and manage projects, with staff working for me. I thought I needed to manage my own life first,” he writes in his 2013 book, “Creative Kenka Jutsu.”

His first project upon leaving was the Japanese live-action movie Rurouni Kenshin, based on a popular 90s manga about a fictional wanderer named Kenshin Himura (Takeru Satoh), also known as the samurai assassin Hitokiri Battosai. Set in the Meiji era, Himura wanders the countryside of Japan offering protection and aid to those in need as atonement for the murders he once committed as an assassin. 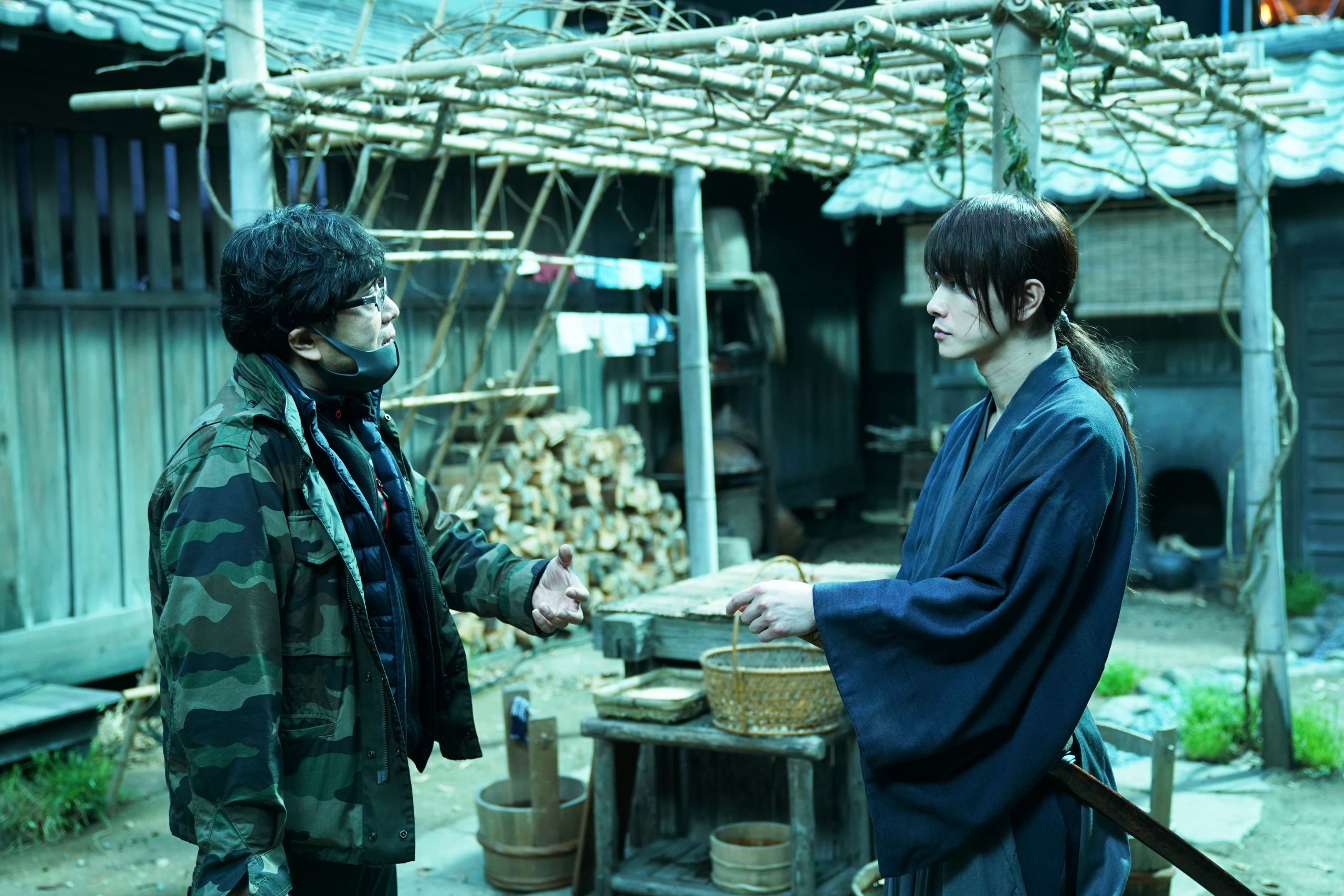 Keishi Otomo and Takeru Satoh on the set of Rurouni Kenshin. A promising young actor, Satoh came on board as the protagonist of the former NHK directors movie debut | Shue Isha 2020 Rurouni Kenshin The Final; The Beginning Film Partners

If craft beer is beer made from local ingredients, Beneath the Shadow is a ‘craft’  movie made by people from Iwate and dedicated to people in Iwate

According to the film’s director, redemption is the core theme of Rurouni Kenshin. “Manga is pop culture, usually for young kids, but redemption is a legitimate theme that anyone can relate to. Himura is a fictional character in this story but surely there must have been people like him, who were living in that era carrying a sense of guilt,” says Otomo. “No matter the genre of a movie, humans are involved in every part: production, story and audience. So our first mission is to capture human emotions regardless of the era, through characters. However, entertaining the audience is another key element, in addition to documenting feelings, because movies are a form of entertainment and the audience pays to watch.”

Otomo even pays homage to his own childhood hero within a climactic fight scene in the third film, Rurouni Kenshin: The Legend Ends. The scene, wherein finally Himura challenges his foe, was inspired by Jackie Chan’s martial arts film Project A. “[It] was a challenge for myself to surpass the movie my younger self was obsessed with,” he says. Otomo’s appreciation for fiction films stems from his experiences at NHK in Akita Prefecture 20 years ago, when he was more often than not tasked with documenting the ‘real’ lives of locals. “Akita was the first place I worked for and I spent four years there learning a lot about the industry alongside meeting local people through the camera lens,” says Otomo. “While making local news programs or filming documentaries, I had a brief look at a lot of people’s lives and everyone I met in Akita had such a wonderful life. I had great experiences of making amazing documentaries but other parts of me also felt editing someone’s life for a 60-minute documentary was not easy at all. “The process of making documentaries is quite simple, as all we need to do is to find someone interesting and film them, but by highlighting one’s life, there are risks of changing their life completely and taking their anonymity away. 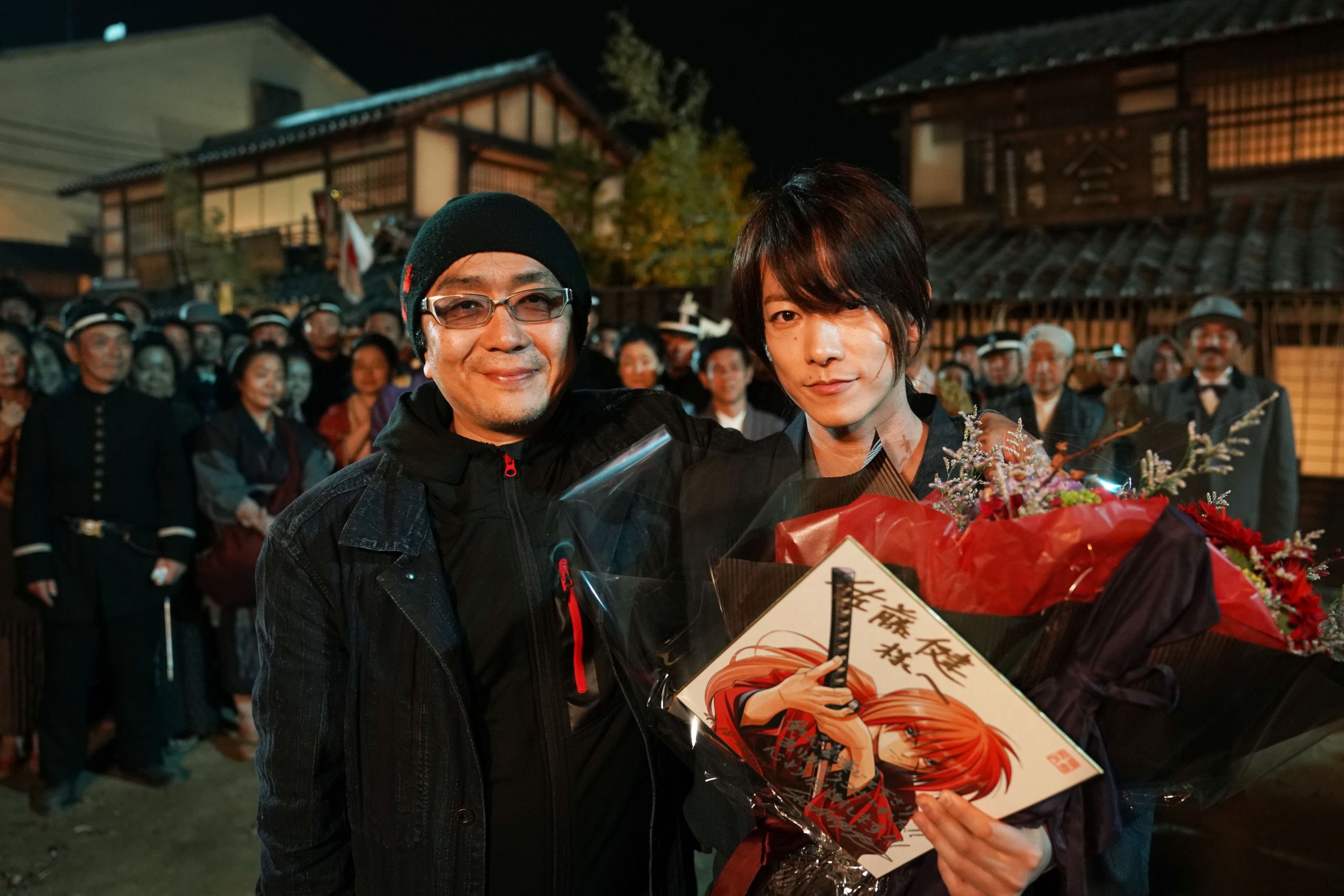 “On the other hand, making fictional movies requires a script to begin with and there is much more to do, compared to documentaries, but I believe fiction can have the same impact as documentaries without sacrificing a person’s life. Obviously Himura didn’t actually exist but Himura’s life is the life of many unknown, nameless samurai who actually lived in that period of time.”

The final two episodes Rurouni Kenshin: The Final/The Beginning have been postponed until 2021 due to the COVID-19 pandemic, but Otomo is already looking to the next phase. “I made Rurouni Kenshin hoping Himura can be a new made-in-Japan hero for kids. I always wanted to be Bruce Lee when I was a kid. The movie series of Rurouni Kenshin had huge success in Japan and then gained a lot of fans even outside of Japan.

“But for my next movie, I’d love to create something the world can enjoy at the same time,” says Otomo, hinting at possible collaborations with international creators in the future.

Born in 1966 in Iwate, Japan. After graduating from Keio University, Otomo joined Japan Broadcasting Corporation (NHK) in 1990. He went to Hollywood to learn script writing and film directing in 1997. After two years, he returned to Japan and directed several highly acclaimed NHK TV series such as “Churasan” and “The Vulture” (Hagetaka). He left NHK in 2011 and worked on the Rurouni Kenshin series including 2010’s Rurouni Kenshin, 2014’s Rurouni Kenshin: Kyoto Inferno and Rurouni Kenshin: The Legend Ends. Otomo’s latest movie Beneath the Shadow, was released this year and Rurouni Kenshin: The Final/The Beginning will be released in 2021.