Brave Blossoms to Take On Maori All Blacks

This Saturday, the Japanese rugby team will have a shot at making amends for delivering such a forgettable performance against the Maori All Blacks in game one of the Lipovitan D Challenge Cup 2014 series. On November 8, the Brave Blossoms will play the second of their two-match series at the Prince Chichibu Memorial Rugby Ground in Tokyo. The first match was played in Kobe on Saturday, resulting in a 61-21 hammering by the Maori All Blacks.

The Maori All Blacks, not to be confused with the New Zealand national All Blacks team, are a New Zealand Rugby Union representative team composed of the best New Zealand Maori rugby players. All players are required to have verified Maori genealogy to be eligible to play.

It’s worth noting that it was the Maori All Blacks that pioneered the black jersey, the silver fern symbol and performing a Haka before kick-off—all of which were later adopted by the All Blacks and other New Zealand sporting teams. For this series, the Maori All Blacks will be performing their own Haka, “Timatanga,” which most rugby fans here in Japan will not have seen before. 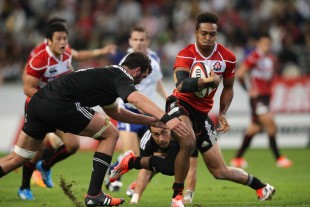 The Maori All Blacks pride themselves in knocking over national sides. The team defeated England and Ireland in 2010, having beaten the British and Irish Lions team in 2005. Japan has met the New Zealand Maori (as the team was known back then) just once before, in the 2008 Pacific Nations Cup, which also resulted in a heavy away loss for the Brave Blossoms.

Japan’s coach, Eddie Jones, will not be pleased with his side’s performance in Kobe, as his players made countless errors that prevented the team from getting any rhythm, ultimately shutting them out of the game. With the Rugby World Cup less than a year away, it seems Japan has a lot to work on, with breakdowns and turning possession over to the opposition being major issues. Defense also needs to be addressed, as the Maori All Blacks were often moving the ball too quickly for Japan’s defensive line to maintain organization.

That said, the 2013-2014 season under Eddie Jones has seen the Brave Blossoms play arguably some of their best rugby to date. They completed a famous victory over Wales in 2013 on the back of some tenacious defending, and again against Italy in June, where the Japan pack dominated the scrums and matched the Italians’ physicality at the breakdown. Japan set a record for a second-tier team by stringing together ten consecutive wins, pushing the Brave Blossoms into the world’s Top 10 team rankings.

It’s a daunting task, but a week is all Japan has to return to the basics: holding onto the ball, getting more numbers to the breakdown, better execution of set-pieces and tackling their hearts out. We saw it against both Wales and Italy, and we hope to see it again on Saturday. A huge crowd turning up to cheer the Brave Blossoms would be a fantastic start.

Japan is very difficult to beat at home when confidence is high and the team plan is well-executed. With the World Cup just around the corner, the Japanese rugby team needs to show the world it can bounce back from a setback and compete with the big boys. The pressure is on. Let’s hope that the Brave Blossoms live up to their name in Tokyo.