Challenging the concept of femininity

A new wave of designers are challenging what it means to be feminine in contemporary Japan, and taking the lead is Higashi Kanae. The young designer has worked with established names such as fashion brand Bodysong and idol group Demapagumi.inc, leading her to hold a runway show as part of Shibuya Culture Festival last
Fashion Week. And her popularity has been on the rise ever since. 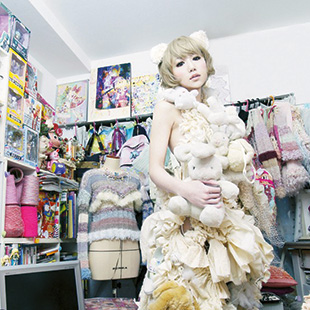 Her muse is Japanese young women—or shōjo: a term that doesn’t translate directly without a significant loss of nuance. You only have to look at the behavior, culture, and fashion that defines Japanese girls and distances them from society, to see that being a shōjo is not a matter of just being young, or being a woman, but a culture in itself.

As a brand, Rurumu seeks to empower these women from within, challenging and celebrating the culture in equal measure, at times encouraging girls to dress for themselves, and at others asking what values have been forced upon them. A reoccurring theme in Kanae’s work is depictions of the Virgin Mary, frequently contrasted against gently eroticized imagery of lingerie and underwear, in essence drawing sharp attention to the “virgin or whore” dichotomy that women must frequently negotiate at men’s behest.

Rurumu’s medium is knitwear, frequently recreating many shōjo fashion staples—maid outfits, the “sailor” schoolgirl uniform, and so on—in delicate knitwear. This has the dual effect of introducing an element of vulnerability into the mix, in that the fabrics are frequently translucent, and also that they are liable to fraying and decay. With this last element, the designer draws attention to the transience of girlhood. The sailor uniform will be grown out of, but not before certain quarters of society has done its best to sully it. There is doubtless an aura of eroticism to the work that can’t be ignored, at once a mirror to how Japanese society perceives girls, but at the same time a reclaiming of their hijacked sexuality. Rurumu acolytes know full well the power they wield, and it is theirs to do with what they please.