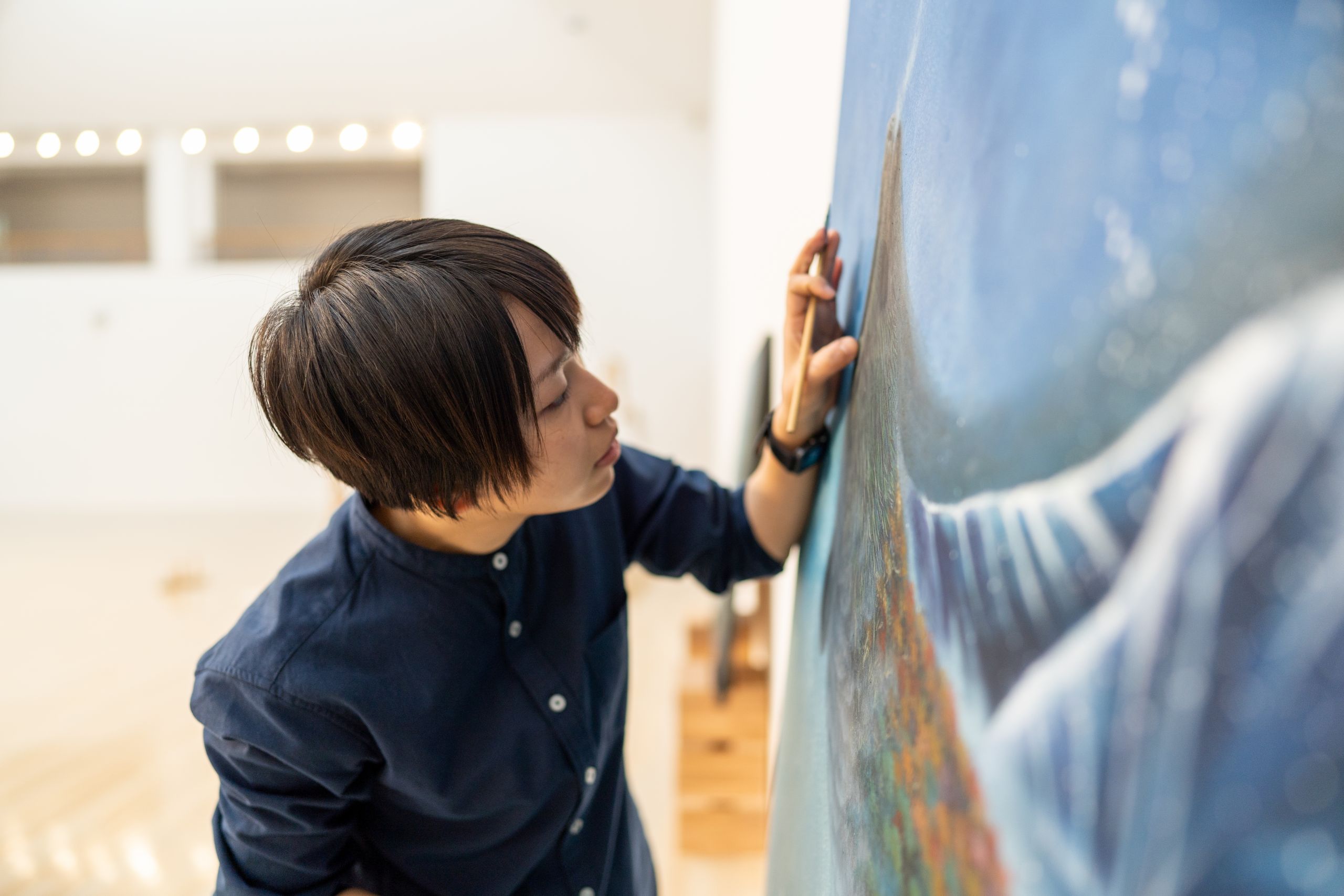 Wilderness: the extremes of nature, free from human conquest and interference. It has long been the subject of depiction in art, and in Japan, has served as a site for experimental, radical creation and discovery. In the 1960s, Matsuzawa Yutaka, known for his principle of the “vanishing of matter” and photographs with blanked-out portions, was at the heart of a movement founded in the Japanese mountains that helped to pioneer conceptual and performance art. Acts like launching an enormous fiberglass egg from the southern tip of Honshu in a representation of liberation, and the near-death performances of Furusawa Taku, who buried himself in the ground with only a tube sticking out for air, captured global attention alongside international conceptual artists like Daniel Buren and Lawrence Weiner.

In the present day, Japan’s most adventurous artists continue to create new frontiers of wilderness art. Mountaineer Bunsho Hattori and photographer Ryuichi Ishikawa explored the daunting Hokkaido winter landscape in Japan’s northernmost reaches, each with little more than a gun and a dog, capturing the moments of their journey via mementos, photographs, and audio recordings.

Meanwhile, rising star artist Aki Inomata has worked on collaborations with hermit crabs, beavers and oysters. Recently, she fused traditional Japanese tie-dyeing techniques and the methods used by bagworm moth larvae to make their nests, working together with the bagworms to create cloth and dye.

Another such artist fueled by the power of nature is Aoi Nagasawa. Her large-scale paintings of forests and animals depict the depths of the Japanese wilderness with an almost mystical quality, from the perspective of one living within it. Nagasawa resides in Yokote, Akita, among the matagi, traditional hunters who hunt and eat deer, bear and fowl. In Nagasawa’s life, which has shifted back and forth between the wilderness of Akita and the urban mass of Tokyo, hunting has become more than just a way to eat, but a form of spirituality and a way of living. 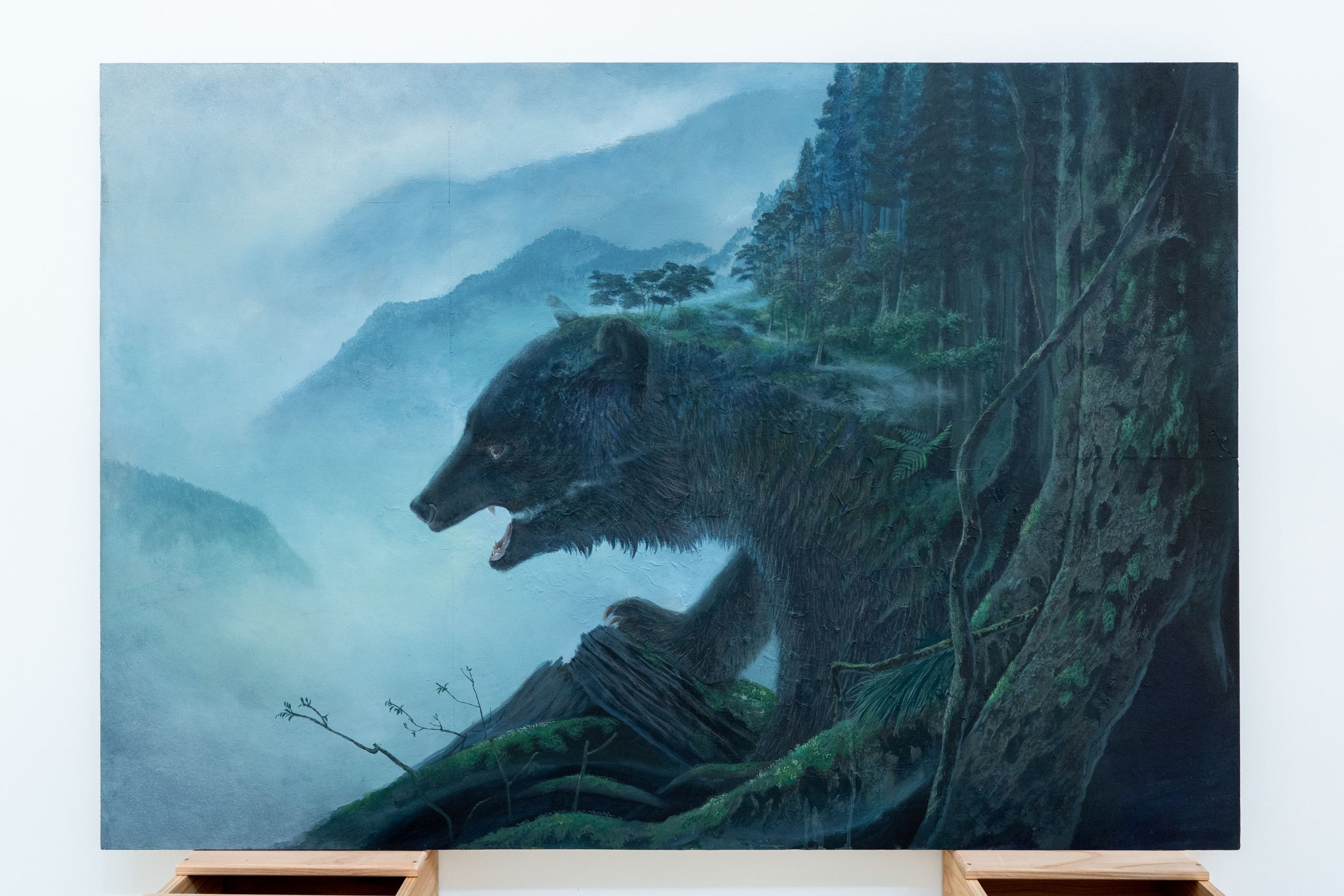 “I feel like I’ve been able to live a bit more honestly,” Nagasawa says. “I’ve started to sense the world more acutely, understanding what I should protect, what I can discard, and how to live my life.” Born and raised in the mountains, Nagasawa grew up fishing and foraging for wild mushrooms and vegetables. However, she never strayed far from the man-made hiking or fishing trails. While she went on to attend art school in Akita, she never felt like she wanted to be an artist, and doesn’t consider herself familiar with the world of art.

Nagasawa decided to move back to Akita three years ago, buying a gun and restarting her life as a hunter-gatherer. The Matagi live in small hamlets in the mountain forests of Tohoku, practicing agriculture during the planting and harvesting seasons, and hunting and gathering in the winter and early spring—sometimes spending weeks at a time in the forest.

“In the process, I’ve had to think about what is life, what is eating—I’ve started to think more deeply about all the essential things,” Nagasawa explains. Her paintings express in visual form the highly personal moments that she has experienced and felt during her wilderness journeys around rural Japan. While Nagasawa creates a mix of commissions and self-conceived works, some of her murals are massive behemoths, stretching up to four meters wide. Different forms of nature overlay, swirl and merge: the cloud-like shadow of a dog blossoms behind autumn forested hills in the shape of a turtle in Aki o Nemurasete. Sparkling streams pour into waterfalls inside the cut-open, forested belly of a bear in Hodokeru Mono. The latter of these paintings is one that Nagasawa takes personal pride in—her first encounter with a bear. “We were dividing up a hunted bear for food,” she says. “We fear, respect and revere bears.

We might treat them as wild beasts while hunting them, but things don’t end there.” The Matagi have a series of rituals to end the bear’s life without suffering. They then cleanly extract the meat and consume the bear meat along with sake, all the while giving gratitude for the sustenance into which it has transformed.

Through her experience eating the bear and taking it in as a part of herself, Nagasawa recognized that the mammal too had the mountain and the wilderness within it. By consuming the bear, she was taking the mountain into her own flesh and blood, with the bear serving as proxy. In this extraordinary painting, the wounds of the hunted bear become the wild mountain, a reverential work pointing to the spiritual practice of the Matagi and the way ancient hunting and eating rituals around the globe connect humans to the plants and animals that we share this planet with. Nagasawa’s paintings express these layers of symbolism within her hunting experiences, infused with an ancient reverence toward nature. She transforms different species of plants and animals into one another, emphasizing the connections among living things and the circle of life.

“I’ve noticed that wild animals only eat as much as they need,” Nagasawa says. “The bears eat only the pieces of meat they want; foxes eat only as much of the rabbit as they want. It’s only humans that make and consume in excess. We have this lifestyle where we need money, we need time, so we hunt a lot of bears, or a lot of birds—more than what’s strictly necessary.” The question of how to live has become essential to Nagasawa ever since returning to Akita. Nowadays, she doesn’t hurry. Sometimes inspiration comes to her in a week; other times, the experiences that turn into her artwork can take two or three years to form. Above all else, Nagasawa’s plea to a hyper-developed Japanese society is to change Japan’s culture of consumerism.

“If possible, I wish people could make what they need for themselves, and then dispose of it so that nature is unchanged from the way it was before,” Nagasawa says. “It’s a way of life that goes along with the flow of nature. A way of life that isn’t over the top.” Even bears have started to live more convenient lives. Some of them in Japan simply forage their meals from human farms and trash. In this way, bears, just like humans, have experienced living both deep in the wild, and in a developed society with convenience at their paws.

“Now is the time to make a decision about how we want to live,” Nagasawa says. Her hope is for a new generation, where bears and humans see and understand both of these worlds, and make the best decision about how to live within them.

Correction: An earlier version of this article and its print version claimed that Aoi Nagasawa attended an art school in Tokyo when she, in fact, graduated from the Akita University of Art.