The Expat’s Guide to Growing Old in Japan: Invaluable Advice for the Long Haul

Getting old is even harder in another culture 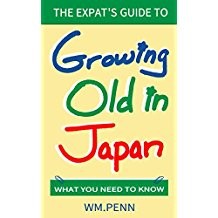 Wilhelmina Penn’s latest book is one that every expatriate in Japan ought to read. Penn, a pseudonym for a writer who has lived in Japan for more than forty years, decided to write The Expat’s Guide to Growing Old in Japan when she began to put her own affairs in order. What she found, though, as she set about her task, was a quagmire of forms, bureaucracy and little information on how to navigate through it.

“For expats here there is very little easy-to-find, easy-to-understand information in English on these topics. Once I started researching the book, I soon realized just how clueless I was,” said Penn, who decided writing this book would be her way of helping others who might find themselves in a similar situation.

Intended to be a kind of starter kit, Penn’s book is broken down into five areas: pensions, healthcare, housing for seniors, funerals, and wills and inheritances. Each section in turn consists of relevant vocabulary in both kanji and romaji, with their definition; ten key points for each topic highlighting what Penn believed would be the most relevant points for foreigners in Japan; the paperwork pile where she lists the relevant forms in romaji, along with their English titles; followed by lists of links to find more information.

“Things happen when we least expect it, and it is good to educate ourselves for the unexpected so we are not floored when things do happen,” said Penn. “That said, I sort of wandered into old age without preparing much, so I thought it was time to get my act together and begin figuring things out. Once I did sit down to write, interesting new information constantly kept popping up, right down to the deadline.”

Written over the course of one Hokkaido winter, Penn’s book is based on years of research and experience in putting her own family’s things in order. In The Expat’s Guide to Growing Old in Japan, Penn brings her skills as a writer and researcher residing in Japan for 44 years to bear. Readers will find not only valuable information that is well-organized, but will find an amicable guide offering tips on how and what to prepare for visits to various offices and organizations. Perhaps most importantly, she advises readers to practice a kind of pleasant persistence as they “ask and ask again” throughout this leg of their journey.

For such a dense, complicated and emotional topic, The Expat’s Guide to Growing Old in Japan is a surprisingly readable and slim volume complete with touches of light humor and cultural insight. Readers are advised to put on their “invisible Sherlock Holmes cap and investigate” assisted living facilities. In the health care section they learn what pinpin korori (healthy until you fall over dead) is and the many reasons it is the preferred way of moving on to the next realm.

Penn also provides information and insight on the current status of the aging and elderly in Japan in relation to each of the five areas. Waiting lists for various assisted living facilities are years long, meaning that families bear the burden of caring for their elders until room opens up. Pensions are paid six times a year only, and can be of such a meager amount that daily life can be challenging to say the least.

“For those who don’t have Kosei Nenkin (Employees’ Pension Insurance System), which is about half the population, Kokumin Nenkin (Japanese National Pension) alone is shockingly small,” said Penn. “I mention in the book that over half the people on welfare in Japan are elderly. It makes me sad to think that the folks who worked so hard to create the Japanese economic miracle are not receiving more of the fruits of their labor.”

The Expat’s Guide to Growing Old in Japan is a daunting but relevant read that is as thorough and clear as the system it describes is intimidating. Getting old, as the saying goes, is not for the faint-hearted, and it is even more true for those who decide to do it in another culture. It will, as Penn writes in the introduction, “put all the cross-cultural communication and coping skills we’ve accrued over the years to the test yet again.” Yet, in these pages Penn offers an excellent starting point for aging as well as “bowing out” gracefully.