Myths and stereotypes around pole dancing

The first time I climbed a pole and hung upside down to attempt the “crucifix,” I was convinced that I would break my neck. With the blood rushing to my head and my thighs struggling to maintain their vice-like grip, it was certainly not a position I ever dreamed of being in. Then again, I frequently find myself in novel predicaments during my weekly pole dancing lesson.

Contrary to what most people believe, pole dancing is not just for strippers. These days, it’s a wildly popular sport that’s shown to improve flexibility, core and upper body strength, and overall confidence. It’s embraced by both women and men, with celebrities like Jessica Alba and Madonna publicly vocalizing its benefits.

As for me, I’ve always been open to new experiences, but the idea of taking a pole dancing class seemed like a joke at first. What could I possibly use pole dancing skills for? A backup career? The hours are flexible, after all.

I decided to give it a shot and booked a trial lesson (¥2,500) at Pole Dance Tokyo, the biggest pole dance studio in the city, with an impeccable reputation.

Celebrating its 10th anniversary this year, Pole Dance Tokyo was established by Lu Nagata, a professional actress, director, and accomplished pole dancer. The studio has 12 poles—enough for every class attendee—as well as champion instructors, some of whom even moonlight as circus artists. One of the best things about the studio is that lessons run every day and late into the evening, so it’s easy to pop in for an after-work session. 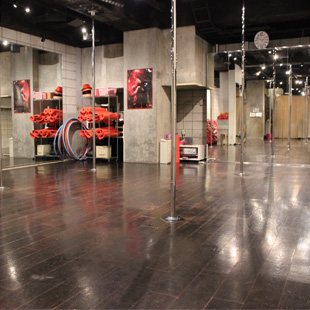 I began in November with a Basic class, being the lowest level; classes are divided into Basic, Beginner, Intermediate, and Advanced. During each 75-minute session, there’s a thorough stretch, followed by mini lessons on walking, spinning moves, and eventually more advanced techniques like climbing the pole and magically hanging off it. Usually the classes culminate in a sexy pole routine, combining the moves practiced in the lesson. After just one arduous class—in which I both suffered and triumphed—I developed a newfound respect for pole dancers, and renounced my negative stereotypes. Pole dancing is insanely difficult. It’s not easy to lift your own weight and arrange your fat/muscle so it doesn’t get pitched, especially with sweaty hands. Add booty shorts and try to smile.

Stubborn by nature, I decided to keep at it. I was determined to make something, anything, look as effortless as the other students do. But damn, the struggle was real.

In April, I “graduated” myself into the Beginner class, where I intend to stay for an undetermined period of time. Though I felt much more confident in the Basic class, I know that it’s better to strive for challenge over comfort. Even so, I sometimes consider demoting myself. I have been introduced to a range of discomfort. The bruises are a guaranteed occurrence; whether you fall, hit the pole at an odd angle, or grab too hard, they appear—sometimes alarmingly fast. Recently, I’ve also suffered from neck/upper back pain—a common ailment in the pole world—thanks to a backwards trick I couldn’t master.

So why do I keep engaging in this masochistic behavior? Well, for every 10 tricks I fail at, I eventually succeed at one. That’s the addiction. Even if I cry during a lesson out of sheer frustration—and I have—that moment when you finally get it is as good as gold. And as purported, I have definitely noticed increased strength and flexibility. Whereas before I could barely hold on to the pole for more than five seconds, I now find myself up there with the instructor pulling me in different directions. Every lesson, I express disbelief in doing a new move, and yet I’ve managed. As for confidence, it’s definitely a challenge to feel sexy when surrounded by smaller, more experienced Japanese women … and every fat roll is up for observation. (Yet they struggle with things I’m comfortable with, and suffer from the same bruises.) It also helps that the instructors are incredibly encouraging and quite literally there to catch you—though mats are on hand, if you so desire.

Pole Dance Tokyo may be a step out of your comfort zone—it certainly was for me—but nothing beats the looks on your friends’ faces when you break out some new moves in Roppongi. Or at a traffic sign.