Beginning to understand the future of Tokyo as a pedestrian-friendly city has two prerequisites: first, you have to know where Tokyo currently stands in regard to pedestrian friendliness, and second, you must be able to pin down what actually makes a city pedestrian-friendly. Anyone who has set foot in Japan’s capital will be able to tell you that it is pleasant if overwhelming place to navigate on foot, but they might have a bit more trouble articulating why. Tokyo is undertaking new projects to reclaim and pedestrianize existing transportation infrastructure to help it grow into an even more accessible and walkable megacity. The future of Tokyo’s infrastructure is looking decidedly human-centric, and I can’t wait for it to arrive.

A useful concept for understanding pedestrian-friendly urban design is the idea of permeability. Permeability refers to how easily pedestrians, cyclists or drivers can move through a city without being restricted by urban forms. A high degree of permeability is desirable. A major road through the center of a city might increase the permeability of cars from that road’s start to its end, but it will decrease the permeability of foot, bicycle and automobile traffic that tries to intersect it. If you spot an interesting shop, park, shrine or sculpture on the opposite side of a street, but you don’t want to go through the pain of crossing, the area probably has poor permeability. Tokyo generally has a high degree of permeability for most forms of traffic due to its major arterial roads and public transit networks being elevated or moved underground to tunnels. This allows pedestrians and cyclists to move freely on ground level. 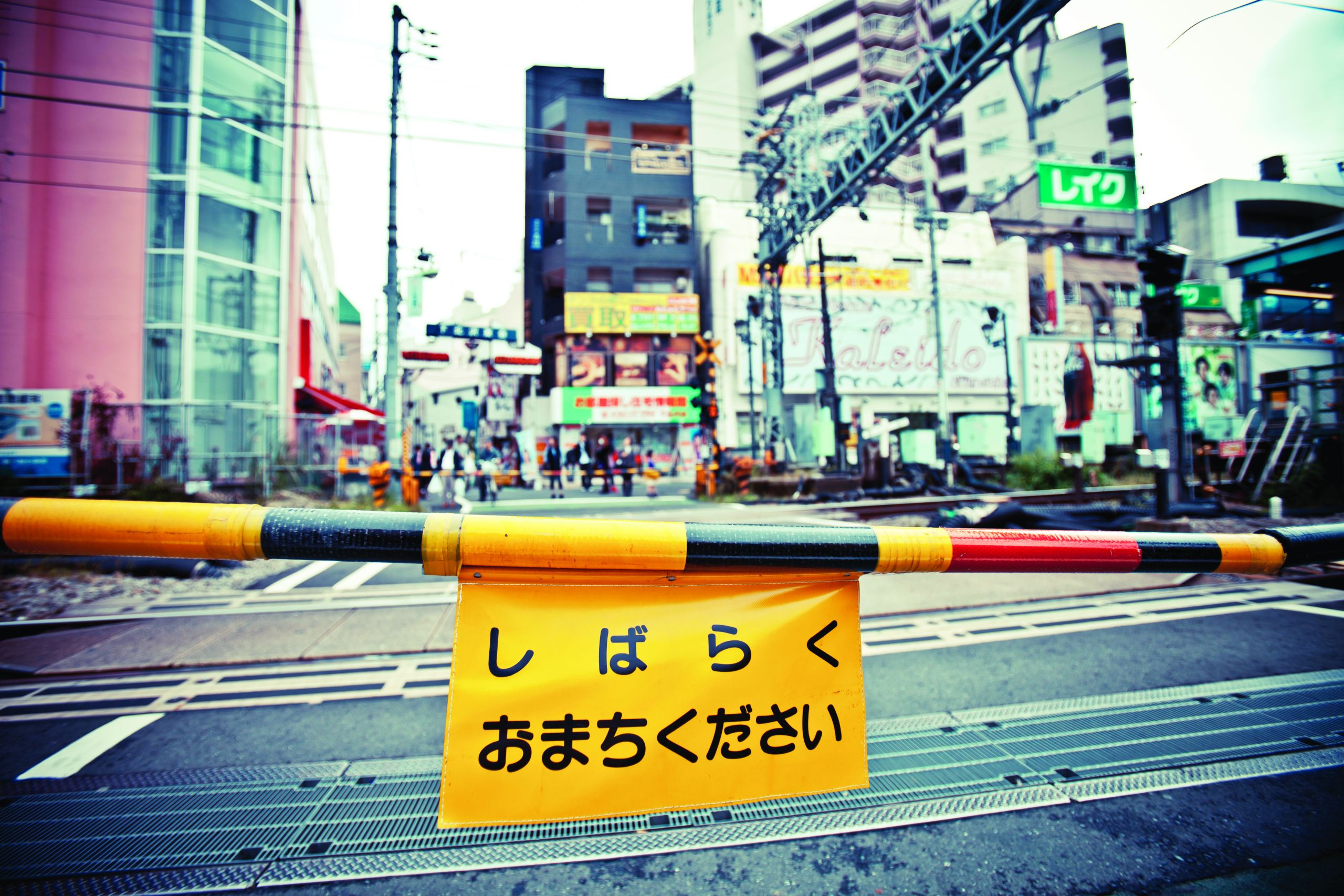 Most major arterial roads avoid the busy train stations where most people begin their walking journeys. This not only helps to improve the walkability and permeability of an area for pedestrians, but it also helps to give each area a unique atmosphere that allows Tokyo to feel like a collection of smaller cities or villages. The city is broken apart by these arterial roads, but each area this creates is large and developed enough that you generally don’t have to leave. This concept is called street hierarchy and it is used to keep foot traffic and high-speed automobile traffic separate.

In Shimokitazawa, a project to improve both permeability and public transit that has been in the works since the 1980s has finally neared completion. The Odakyu Line, a major commuter railway line that runs through the neighborhood, has been moved underground. This not only clears the area where the tracks used to be but because it is a two-tiered tunnel, the tracks can also now accommodate more trains at once. The area above the tracks is no longer an impermeable train line dividing the neighborhood but is instead currently being redeveloped into a modern pedestrian-only area called Senrogai. 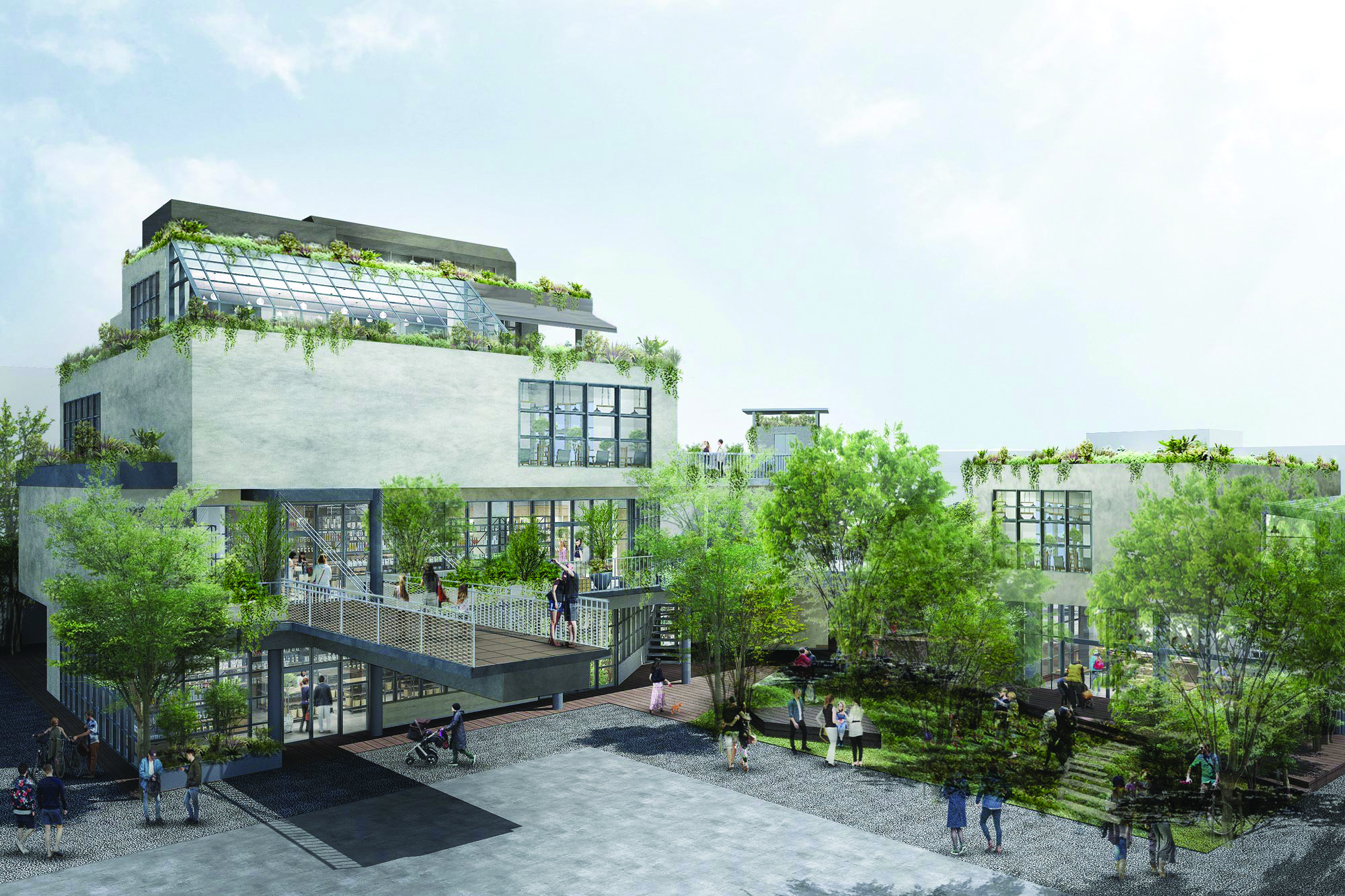 Senrogai is a 1.7km development on the former Odakyu Line tracks.

Senrogai, which, when translated to English, means something like “Railroad Town,” is a 1.7km development on the former Odakyu Line tracks that has outdoor shopping areas, designated areas for markets, a traditionally-styled ryokan, a hotel and more. The entire area is beginning to fill with trees and flowers, and as construction continues, further developments will continue to spring up. This project turned something that was an obstruction in the flow of pedestrian traffic into a place where people can comfortably gather and spend time. That being said, it should also be noted that the project, and others in Shimokitazawa, have been criticized for gentrifying the area and ruining its once cool aesthetic. However, if Tokyo’s urban environment is one thing, it is always changing. Either this development will meld with the counterculture atmosphere of the area, or somewhere else in Tokyo will take its place.

If you want residents to utilize a city as pedestrians, rather than as drivers or passengers on public transit, you need to encourage foot traffic. This can happen either by making alternatives less desirable or by making walking a more pleasant experience. Generally, to make a space desirable for walking, it should make car-free. Cars come with noise, pollution and a lack of permeability. Relocating roads with busy car traffic to the city’s periphery-or better yet, underground, improves the experience of navigating a city on foot.

Ginza, Tokyo’s high-end shopping district, is taking a drastic approach to increasing walkability by converting its existing automobile infrastructure into a pedestrian-friendly space. Ginza is generally less pedestrian-friendly than other areas of Tokyo due to its wide and busy grid-like and car-friendly streets. When streets are car-friendly, they are necessarily unfriendly towards people. Luckily, this is already somewhat mitigated by closing some of the main streets to cars on weekends, leaving the wide streets open to walk on; and Ginza’s new project will help to make the area even more pedestrian-friendly.

Taking inspiration from New York’s High Line and Paris’s Coulée Verte, Ginza is planning to convert a two-kilometer elevated expressway into a lush green walkway and park far above the hustle and bustle that lies below. The park will run in a U shape, surrounding Ginza from Yaesu to Shimbashi. This new development will add much-needed green space to an area of Tokyo that can feel especially gray and concrete-heavy. The project won’t get started until at least the 2030s, but it will certainly help Tokyo grow into not only a more walkable city—but a greener one too.

The construction of this elevated park isn’t the only project that puts the pedestrian experience ahead of the drivers’. The Ginza project is being made possible by another project that plans to restore one of Japan’s most important historical landmarks to its original state. Just before the 1964 Tokyo Olympics, Nihonbashi, the bridge from which all distances to the capital are measured, was covered by a hulking concrete expressway that runs over the river and through the rows of towers that line it. Now, plans are underway to move this expressway underground, recovering the hidden waterway for the people. 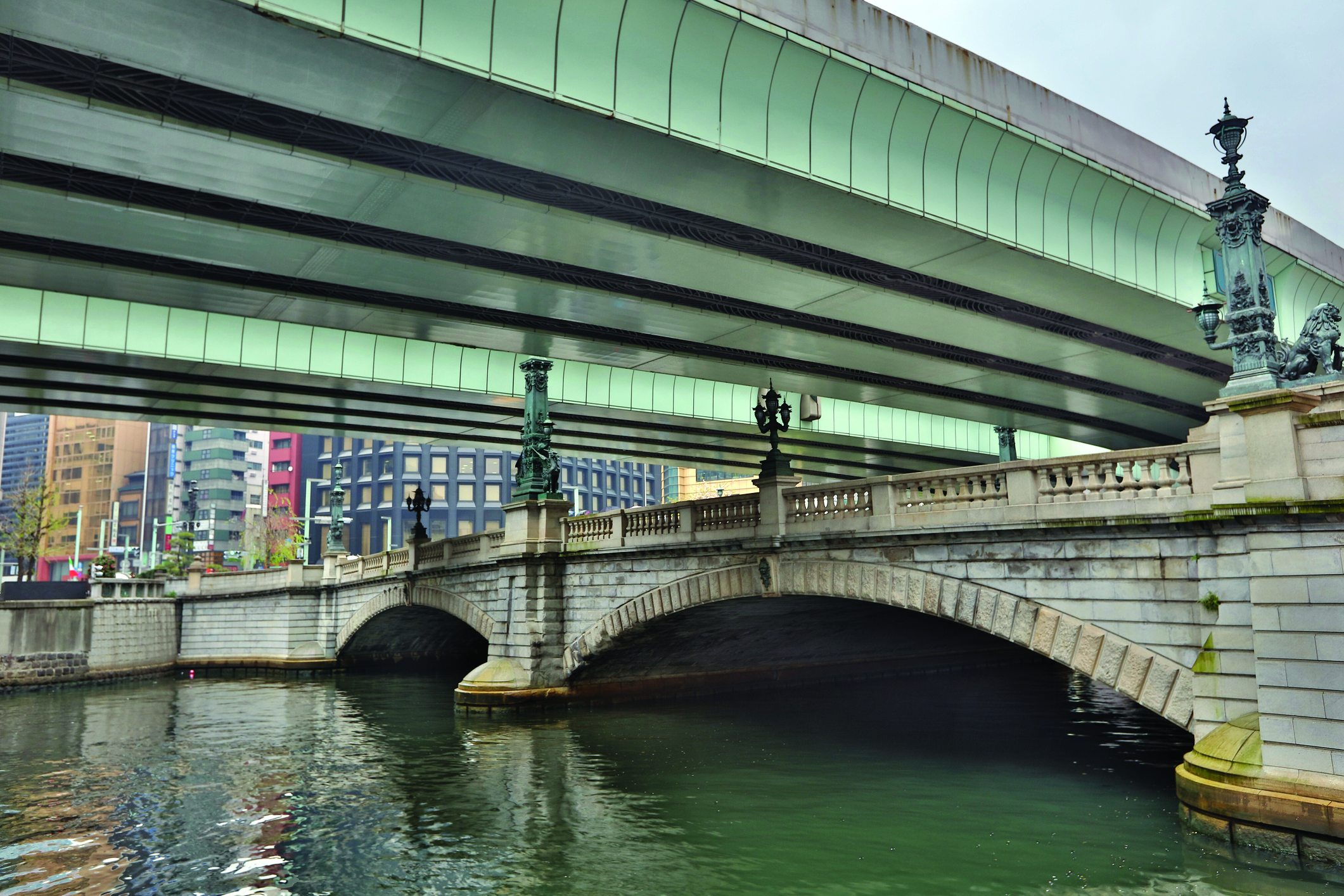 Nihonbashi River’s usefulness as a pedestrian space was destroyed by Japan’s post-war industrial boom through toxification and industrialization.

While this twisting expressway that flies overhead lends to the cyberpunk aesthetic that some associate with Tokyo, its oppressive structure makes the area underneath it much less pleasant for those on foot. The area will be developed to make use of the historically significant bridge and currently unusable waterway. The development is forecast to cost over 300 billion yen and will involve major construction for nearly two decades that will affect many of Tokyo’s expressways, including the above-mentioned Ginza park project.

Nihonbashi River is just one of many once lively and human-centric waterways that were effectively destroyed by Japan’s post-war industrial boom. This included toxification from manufacturing and human waste, industrialization wherein the rivers were covered by highways or railroads and flood protection measures rendering the rivers useless to pedestrians. In one of Hokusai’s woodblock prints from his 36 Views of Mt. Fuji collection, you can see Nihonbashi as a place for life at the human scale before it was covered in concrete and steel. Another example, Meguro River, a now popular pedestrian-friendly spot for shopping, cherry-blossom viewing and walking—was also once abandoned due to pollution and industrial contamination. 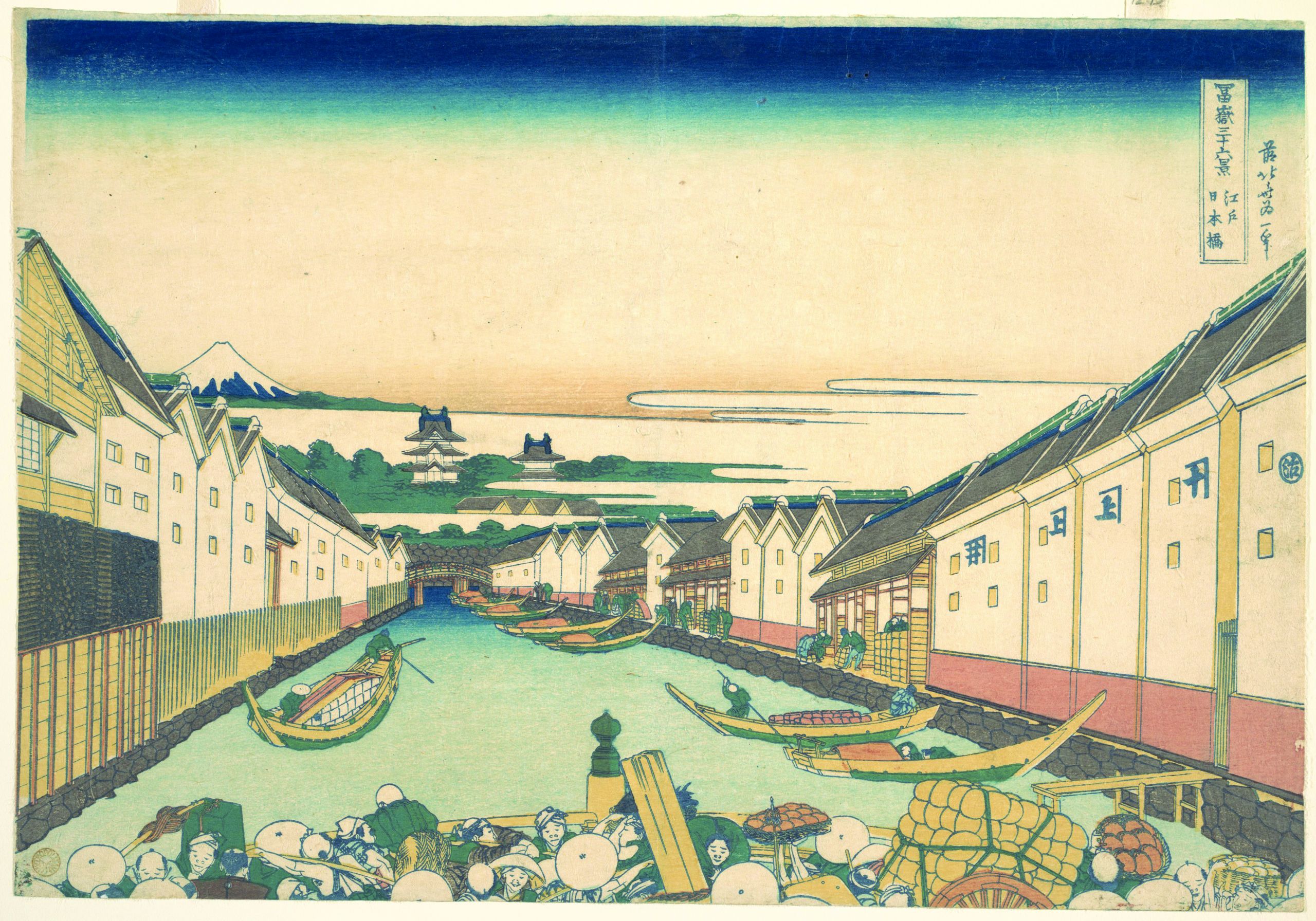 Tokyo grew into a pedestrian-friendly city from a mix of planned development, and centuries-old organic growth. In order for it to continue progressing into an even more walkable place, it will have to continue this method of building planned areas, while also letting local business owners shape, change and recreate spaces to suit the needs of their neighborhoods. Overly planned areas can feel sterile and uninteresting, while completely unplanned areas can feel chaotic and unsafe. Tokyo on the whole has long navigated the boundary between these two extremes, having been subjected to more change in the last 150 years than almost any other major city. Only time will tell, however, if these major projects will allow the city to grow while maintaining its happy equilibrium between chaotic and organized.