Souvenirs of the absurd

Every once in a while, I add to my “gachapon” collection. First, it was a cat puking. Then it was a parakeet cleverly disguised as a peeling banana. Most recently, it was a salaryman bending over, ready to kancho—the mischievous act of sticking your index finger up someone’s butt. In looking for authentic Japanese souvenirs of the absurd and often obscene, gachapon never cease to disappoint. 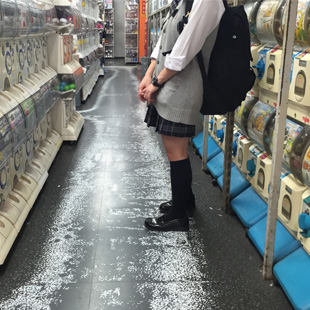 Gachapon is the generic name for Japanese toy capsule machines, seemingly another branch of the rampant vending machine culture that rules supreme in the country. Inside each machine’s see-through display lie brightly-colored plastic balls, encasing a variety of toys, set to a theme. And although most machines are released as a complete set of this theme, displayed on the front of the unit, you receive your toy at random. Sometimes it takes a few tries before you’re awarded the one you covet … but often, it never comes. A few twists of the knob—which makes a “gacha” sound, thus the name—and your toy is dispensed with a pon (clunk) in all its glory. Machines only take ¥100 coins or equivalent tokens, and toys usually cost between ¥100 to ¥500.

Generally, the toys are of the keychain, cellphone strap, or mini figurine variety. But the miniature world of gachapon extends beyond the mundane to include gems like tiny condiments, car models, anime characters, street signs, and even rare limited-edition items. 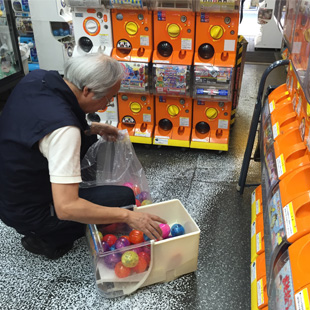 And although the objects inside are referred to as “toys,” gachapon are most popular with adults, due to their more often than not mature themes. It’s not surprising to stumble across gachapon that feature well-endowed female characters, themes involving poop, or overt stereotypes. (Chubby American soldiers anyone?) The toys are of a higher quality than their predecessors found in the United States: more intricately molded, made with stronger plastic, and often more valuable as collectors’ items due to their pop-culture status.

The machines themselves have spread around Japan like a plague since they were imported from the U.S. in 1965, hitting their heyday in the 1980s. You don’t have to venture far in Tokyo to find one; they consistently pop up in movie theaters, department stores, and at train stations. There’s even dedicated gachapon shops, wherein avid collectors can stand guard over a favorite machine until an employee refills it. Perhaps the gachapon mecca can be found at Akihabara’s Gachapon Kaikan. Here, you can chose from over 430 machines, with 50 new “titles” available each month.

Whether you fancy a new desktop ornament or something to confuse your friends abroad, gachapon is a cheap alternative to classic omiyage (“souvenirs”)—and often far more amusing.