A man, a drum loop and a lefty guitar

Fukuoka indie rock darlings Number Girl broke up in 2002. After nearly two decades, they reformed at the Rising Sun Rock Festival. Lead singer and guitarist Shutoku Mukai said he got drunk one day, wanted to make money and decided to call his former bandmates.

Mukai’s return to big shows (he started an indie label after Number Girl) calls for celebration, but it’s also reason to turn our attention to blossoming Japanese indie institutions. Dead Funny Records is one of them. While independent labels outside of Tokyo and Osaka were rare some 10 years ago, Dead Funny is a promising development that was born in Fukuoka back in 2012. GeGeGe, or Ryouto Mizuno, belongs to Dead Funny and hails from Kanazawa. He inhabits a strange little space between dream pop, lo-fi and beach rock — quite a feat for one guy. It’s not hard to picture the musician in his apartment, bent over his recording equipment, feverish and full of song ideas.

Belonging to a label that gives its artists full creative discretion, even his album covers and music videos feel carefully handcrafted. For such independent artists, their creations aren’t primarily a commodity; they’re a spontaneous enterprise, a desire as pure as Mukai’s divine, drunken decision. The video [below] for “Wasurete [Forget],” from his debut full-length album SF, includes found footage of an old watch commercial, a boxing match, a rodeo and a cat. His wistful, droopy vocals pair well with the guitar and bass lines, which are steady, catchy and sweet. There are also more synth-driven songs like “Toshi [City],” in which he croons about a UFO, completing a sound that’s stuck halfway between the mellow riffs of beach rock and the sci-fi longing of atmospheric synth. With a new album in the works, we can expect more magical lyricism and spacey melodies drifting our way. Keep watch; he won’t stay still for long.

Metropolis spoke to GeGeGe about his Dead Funny career, the Japanese language, left-handedness and musico-philosophical influences like Philip K. Dick.

Metropolis: How old are you? How long have you been a musician?

GeGeGe: Although people often say I look over 30, I’m 24. I first received a guitar around age 16, but like many other teens I wasn’t very serious about playing. However, at that time, I recorded a lot of sounds I liked on my phone, and I think that experience has influenced my current musical style.

M: You originally recorded at WanWan Studio, where the rock band Galileo Galilei recorded. How did you come to join Dead Funny Records?

G: I only recorded one song from SF at WanWan Studio and, as I’m obviously a huge fan of Galileo Galilei, I emailed the demo to the studio as soon as I finished the song, thinking to myself, “I might as well.” But an error occurred with the email several times, so I sent the demo directly to a member of Galileo Galilei instead. They replied politely, and ultimately allowed me to record. To this day this is such an amazing memory. As for Dead Funny, they’re a label I’ve always liked because they’ve worked domestically with artists like TOPS as well as a number of international acts. So, with just a glimmer of hope to connect with someone, I sent them a demo. Surprisingly, I immediately received an OK, and to this day they’re still taking care of me. 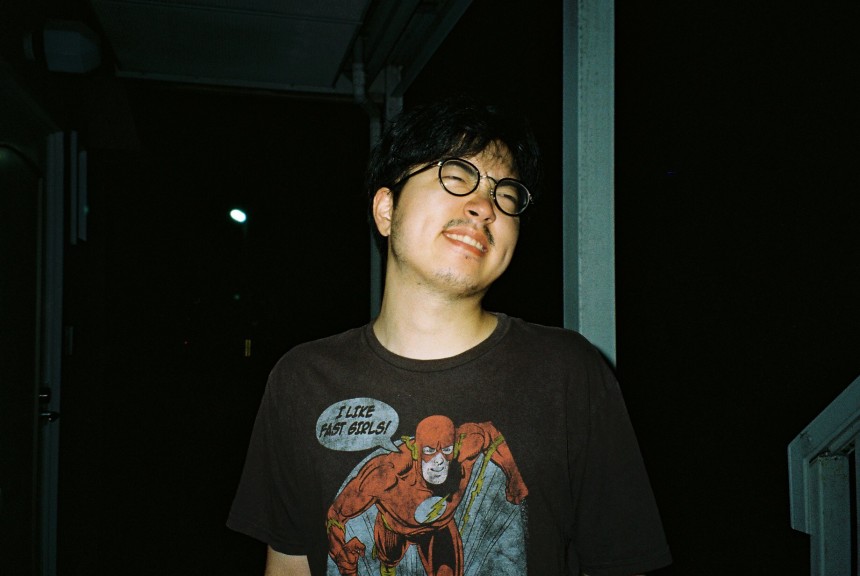 M: It seems GeGeGe is a one-man operation. Do others help you devise, record and render music?

G: Although I make songs completely solo, I perform live with a band. So all the ideas and production involve one person. During the recording process, I work with the members a little bit and we have changed a phrase or something small here and there — but up to recording the demo I work completely alone. After that point, like when I worked with WanWan Studio, I contact someone I like, someone I’m interested in, and ask to collaborate with them.

M: Being under an indie record label, I’d imagine you have a lot of creative independence. What’s difficult about this?

G: It really is so much freedom. When it comes to making music, there are no difficulties at all under the label — it doesn’t feel like work. Of course money is a problem, but if I continue making good music I believe that can be resolved.

M: I’ve looked at your personal SoundCloud where you post instrumentals and demos and the like. One of your recent posts is called “Joke 2.” Why do you put up unfinished songs or part-songs or “jokey” music on a public account? I enjoy listening to the demos myself. Does this account play a role in your song-making and creative process? Or is it more a venue for stuff that can’t go on an official release?

G: “Joke 2” came about because I was sorting the files on my PC. When I heard a file from an old band, it made me nostalgic. The GeGeGe SoundCloud is for when a [song] idea comes to me and within a few hours I can give shape to the idea. I do this because I have a tendency of being too inspired by a single genre or song, of putting too much of a genre or song into my own track. So I do a rough recording once and get the song out of my head.

M: Can you tell us about your song-making process, if there is one? Does song-writing usually precede music-making for you, or will you build a song’s lyrics off the music?

G: The music is first and the lyrics are last. After I create a drum loop, I’m usually struck with ideas. I also start with rough vocals as well.

M: Something I really love about your music is how it’s lyric-heavy. You are definitely a poet. I feel like it would be easy to cop out with lyrics that don’t mean anything. Why do you emphasize lyrics so much?

G: Thank you. Japanese is a really magical language and has a lot of roundabout phrases — it’s not very direct. I feel this reflects the uniquely complicated personalities of Japanese people. Still, I think Japanese is the best language in the world. It has a wandering quality and melancholy articulation. I do the best I can to write lyrics that demonstrate how cool Japanese is.

M: Your lyrics are very frank. Can you identify any sources of inspiration for your lyrics? Are they just personal thoughts and observations? Wishes, dreams?

G: I really love the novels of Philip K. Dick, and I’m influenced by his philosophical world. I often ask myself questions as I write songs. Generally speaking, there are too many things in life and in the world that we don’t understand, so we have to spit it out and verbalize it a little (laughs). Also, you can’t pack very much information in a Japanese phrase compared to English, so the lyrics tend to be plain. 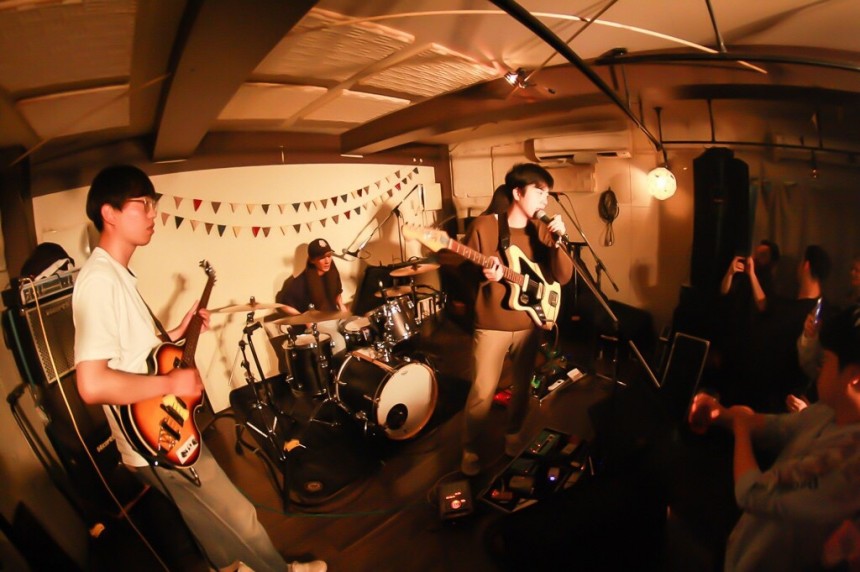 M: Your social media tells me you’re a guitar enthusiast. In October, you Tweeted about a gorgeous left-handed guitar you found on Mercari. Are you a self-taught guitarist? Did your love of the instrument precede original music-making, or did listening to music prompt you to start guitar?

G: I’m not knowledgeable at all, but because I’m a lefty and there are very few left-handed guitars, I have to search online [for them] so I end up doing a lot of research. However, I like “bizarre guitars” (a term coined by Guitar Magazine’s Hiroyuki Noguchi for odd, retro-style guitars). A left-handed “bizarre guitar” is like a “super-bizarre guitar,” right? So I’m always looking for them. At this level, I can only make sounds on guitar, so I have to study more.

M: Do you have a favorite make of guitar?

G: Right now, I’m looking for a lefty Fender Jag-Stang. I find them sometimes, but the prices torment me. I like all “bizarre guitars” made in Japan. Looking at them, there’s nothing else I get that excited for.

M: In media you’ve been mentioned alongside The Drums, DIIV, Porches and Wild Nothing. Your guitar-playing reminds me of Real Estate and Twin Cabins. Your singing reminds me of Clap Your Hands Say Yeah and Her’s. Do you have any musical influences?

G: I like pretty much all of the artists you mentioned, but my favorite artist from Captured Tracks is Beach Fossils. As for last year’s albums, I listened to Kevin Krauter’s Toss Up a lot. I like the Japanese artists Supercar, Shintaro Sakamoto and Seiichi Yamamoto. They are the best when it comes to sound and of course, vocals, lyrics and melodies.

M: You combine Japanese lyrics with Western-influenced sounds. Is there a reason all your song titles and lyrics are in Japanese?

G: I love indie music from abroad, so it’s boring and too simple to just use English, and with Japanese I can pay more attention to nuances. 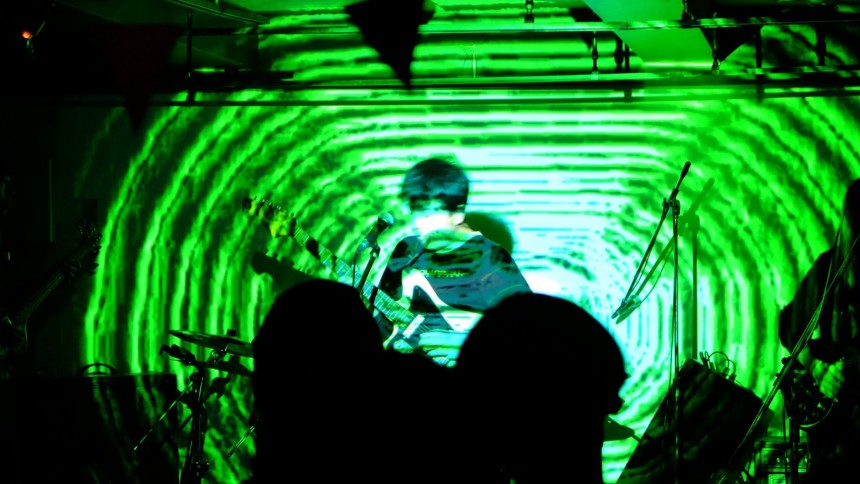 M: I like your music videos. Do you edit them yourself? If so, where do you find the footage?

G: Namiki Naoya made the animated portion of “Tokeru” for me, but I did the editing. I find the footage on a bunch of public domain sites, looking up something like “public domain footage sci-fi.”

M: Your first full-length album is SF. What does “SF” stand for?

G: Simply put, it stands for “science fiction,” but it has other meanings too — it stands for “Sukoshi no Fuan [A Little Worried],” which is also a song in the album. Fujiko F. Fujio [the creator of Doraemon] used SF to mean “sukoshi fushigi [a little magical]” — there’s that factor too. So I want the exact meaning to be obscure.

M: There’s been a subtle progression in sound from your first release “Moyamoya” to SF to “Tokeru.” “Moyamoya” feels melancholic to me, while the newer releases are more lighthearted and playful, and include more of the creamy riffs and upbeat drums. You are about to finish your new album. What can we expect from this? Are there any collaborations?

G: On this album, I am singing about more personal things than ever before. I also went for a sound more like that of a band. There aren’t any collaborations on the songs, but I ordered the album cover from an international artist and I didn’t make the music video on my own, so all these different people came and helped me. I hope this reaches many people. Stay tuned!

GeGeGe says his new album will come out this October or November. Catch him on Spotify, Apple Music or Bandcamp.